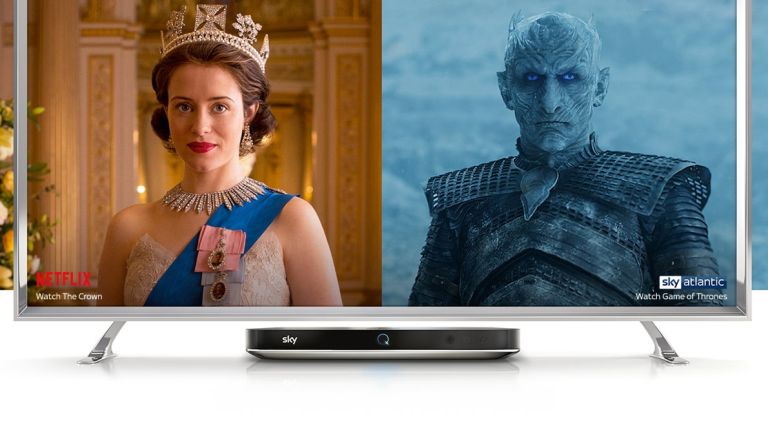 Netflix is finally available on Sky Q, giving Sky viewers access to the 3,616 movies and 1,436 television shows currently available on the streaming service.

The integration means Netflix shows like The Haunting Of Hill House, Stranger Things and The Crown will now appear within Sky Q's on-demand menu alongside content from the likes of Sky Atlantic, ITV Hub, FOX, and BBC iPlayer.

Sky Q says it has tweaked its inbuilt AI-powered recommendations to suggest Netflix shows based on your Sky viewing habits, and vice versa. As before, these recommended shows and films will populate the Sky Q homepage.

Sky announced plans to integrate the Netflix streaming service into its Sky Q satellite set-top boxes back in March 2018. And now the UK broadcaster has finally rolled-out the update to Sky Q hardware across the country. Sky Q viewers won't have to do anything, since the update is downloaded and installed in the background overnight.

Stephen van Rooyen, Chief Executive at Sky UK and Ireland, said: “We want Sky Q to be the number one destination for TV fans. Partnering with Netflix means we will have all the best TV in one great value pack, making it even easier for you to watch all of your favourite shows.”

Existing Netflix subscribers will be able to sign-in to the new Sky Q app with their account details to start watching via the satellite set-top box. However, Sky is also offering a new bundle that combines Netflix with its own on-demand offering.

Dubbed "Ultimate On Demand", the new package combines Netflix and Sky Box Sets and costs £10 a month. When bought separately, Netflix subscriptions cost £7.99 a month and Sky Box Sets £5 a month, so the joint package does come at a discount.

However, watching Netflix in 4K Ultra HD is only available to those who pay for the most expensive Sky Q subscription, known as Sky Q Experience, which includes the fancier 2TB box satellite box that's required to watch in Ultra HD quality.

Netflix subscribers who want to join the "Ultimate On Demand" package will be able to migrate their account and keep their recommendations and viewing history.

Sky Q recently added a Spotify app to its satellite hardware and has announced plans to bring High Dynamic Range (HDR) to the service in 2019.