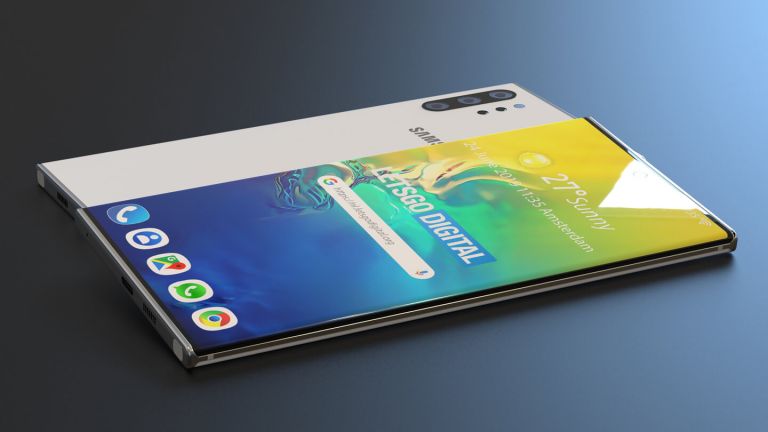 The Samsung Galaxy Note 10 launch date, widely-tipped to land on August 7, is approaching at an alarmingly fast pace. Ahead of the event, we've already heard a number of very interesting tidbits about the flagship handset, including that there will be two handsets with different display sizes – both available in 4G and 5G variants, a tweaked holepunch display design, and no 3.5mm audio port in sight.

And now we've got our first peek at one of the 5G-enabled models coming to the Samsung Galaxy Note 10 range, courtesy of Dutch technology blog LetsGoDigital.

The high-resolution images, which unmask the new centred Infinity-O design, were published in an article with key details about the flagship, including the fact that it's very likely to carry a Time Of Flight (ToF) sensor in the rear-mounted camera array.

Samsung added in the sensor, designed to improve the depth-effect in Live Focus images as well as Augmented Reality (AR) apps, to the Galaxy S10 5G – despite the sensor not making the cut for the standard Galaxy S10, or Galaxy S10 Plus. The hQVGA 3D-depth sensing camera, which equates to 0.038-megapixels, also enables the adjustable artificial bokeh-style blur behind the subject when shooting video.

That's a first for any Samsung smartphone.

LetsGoDigital believes the same next-generation Live Focus feature will make it's way to the Note 10 Pro 5G. Given that these handsets typically command higher price tags than their 4G-toting counterparts, it makes sense for them to include a number of other hardware improvements not available on the plain ol' vanilla 4G variant.

It sounds like the Samsung Galaxy Note 10 will get a number of boosts to its camera technology. According to serial tipster Ice Universe, the Note 10 will be equipped with three variable aperture settings. With the Galaxy S10 range, the main camera automatically switches between f/1.5 and f/2.4 based on the amount of available light. With the Note 10, Samsung will purportedly add an extra step: f/1.8.

Between the improved artificial, adjustable bokeh-style blur in Live Focus images and videos, and the additional aperture settings for tough low-light conditions, it sounds like the Galaxy Note 10 could be a real photography powerhouse.

And if the design showcased in these images is anything to go by, it will be a real stunner too. Roll-on the next Galaxy Unpacked on August 7th!