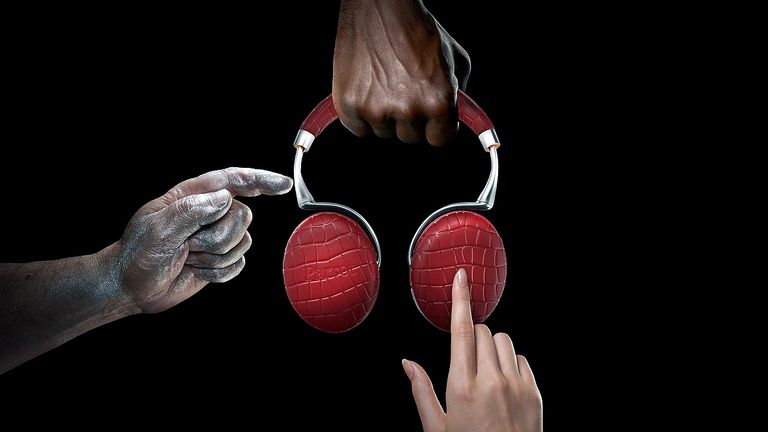 ThoughtIron Maiden's canswere the big, on-ear story of the day? Think on.

'Zik is the revolution. Zik 3 is the evolution. Evolution is a permanent revolution.' Those words can only mean one thing: it's great news for fans of quality audio, lavish design and preposterous, possibly-translated-from-French press releases: the latestParrot Zik Bluetooth wireless headphonesest arivée!

The Zik 3 comes with its own wireless charger, or can use any Qi charger you happen to have lying about. Charging time is '2 hours for 18 hour autonomy.'

As on previous models there's a capacitive 'command panel' on the right earpiece, letting you adjust the volume, skip and pause tracks with a swipe or a tap. 'Head detection' automatically stops the music when you take the headphones off your ears and resumes it when you put them back on.

There's also noise cancelling, the option to return ambient sound to the mix - so you can hear traffic or people shouting, 'take those crocodile headphones off, you big ponce!' when on the street, or your own voice when making a call - bien sur, there's a mic for hands-free calling.

Another new addition is the ability to get 'high fidelity sound' via a USB input from your PC or laptop.

The Apple Watch and Android Wear apps follow in the footsteps of the iOS and Android ones by letting you have at graphic equaliser settings, both presets, basic user-controlled one, and 'Producer Mode', which lets you tune the sound from the Zik 3, 'like professionals do in studios thanks to a high-performance five-band, full-parametric equalizer combined with a proprietary spatialisation effect.'

Perhaps most theoretically interesting but actually rather under-used so far is the option for music makers to create their own, shareable equaliser presets so you can 'listen to their music the way they want it to sound on the Parrot Zik.' You can also download presets created and shared by other Zik users.

There's also a slightly enlarged headband for greater comfort. Colours? Mais oui: The croc finish is in black, brown, emerald green or red; the stitched one - 'an assertive style!' comes in black or ivory; while the plain, leather grain one is in black only. Bof!

The Parrot Zik 3 comes out late 2015, pricing TBC but liable to be in the £250 arrondissement.