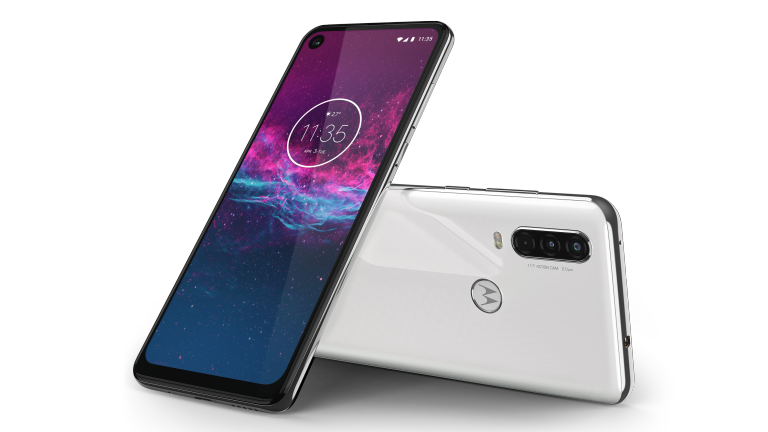 Motorola has unveiled the Motorola One Action, a new Android One phone that comes equipped with the industry's first ultra-wide action camera.

The action camera's unique selling point is that you can shoot landscape movies while holding the phone vertically, with the lens capturing videos in a movie-style 21:9 aspect ratio.

Internally, the phone delivers a modest spec that is in-keeping with its budget-orientated price point of £219 ($265), with Exynos 9609 CPU partnered with 4GB of RAM, 128GB of internal storage space (can be expanded by microSD card), and a 3,500mAh battery stack.

In terms of software, the Motorola One Action comes running Android 9.0 Pie, and as it is an Android One device, it is guaranteed to receive at least two years of Android OS upgrades, as well as priority on monthly security updates.

The 'Action Cam' is definitely the star attraction here, though, which is one of the Action's three rear cameras. This camera allows you to record 4K footage with a remarkably wide 117-degree field-of-view in landscape mode while holding the phone vertically. The idea is that it is much more natural to hold a phone this way and, therefore, more convenient to shoot action-stuffed videos with.

The Motorola One Action's other rear cameras are a 12MP main lens and a 5MP depth sensor, while the front of the phone is equipped with a 12MP selfie camera.

T3 will naturally be reviewing the Motorola One Action in full shortly, so be sure to check back in soon to see just how that Action Cam works, and whether it is enough to help propel the handset into T3's best cheap phones guide.

More information about the Motorola One Action can be found at its official web page.