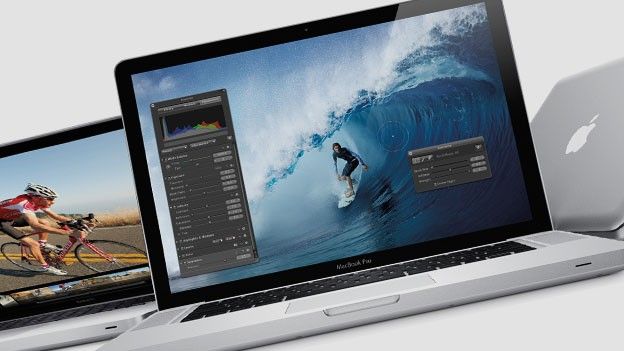 MacBook Pro 2012 release date, design, specs & price rumours taken from around the web. But which piece of gossip will prove to be accurate come WWDC?

We all couldn't help but coo over Apple's latest MacBook Pro laptop when it was released last year, and we're hoping the refreshed 2012 model, rumoured to be unveiled at the Californian company's World Wide Developer's Conference next week, will have us hooked.

If rumours are to be believed, a lighter, slimmer and high-spec MacBook Pro will be hitting our shelves real soon.

But with Apple keeping tight-lipped about everything, details have been scarce, which is why we've turned to the gossip breeding ground that is the World Wide Web to discover what to expect from the upcoming MacBook Pro.

As is the case with all Apple products, rumours surrounding the launch of the refurbished MacBook Pro have been rife – but firm details are nonexistent.

The latest gossip is that we'll be seeing a brand spanking new version of the MacBook Pro launch at WWDC, set to take place between June 11 and 14.

That's right Pro fans: you don't have to wait too long to get your grubby little mitts on Apple's latest foldable kit.

According to reports last month, Foxconn (that's the controversial manufacturer that Apple uses to pump out its iThings) is ramping up production of the new MacBook, exacerbating rumours that the laptop will be landing soon. As in July soon. Boy, that's soon!

In fact, Apple placed such heavy orders that poor overworked Foxconn has been forced to outsource production of the much-mooted device, simply because it doesn't have enough man power to roll 'em out, IT news portal DigiTimes reports.

The report reads: “As Apple's new MacBooks are expected to launch in the near future, related upstream supply chain players are reportedly facing labour shortages because of strong orders from Apple, while some supply chain makers are even outsourcing their orders to meet shipment schedules, according to sources from the upstream supply chain.”

It adds: "Component manufacturing plants in eastern China have been suffering from labour shortages for a long time, and although May and June are the IT industry's traditional slow season when shortage issues are usually not as significant, the strong orders from Apple's new MacBook are leaving many upstream makers unable to satisfy demand."

That's not all. Last month, US retailer Best Buy announced that it had slashed the price of its current stock of the MacBook Pro, further fueling reports that the new range of Pros will be landing soon.

This is the same company that slashed the price of its iPad 2 stock weeks prior to the launch of the new iPad in March. We don't mean to gossip, but when things become this obvious, it's hard not to pass comment.

The 2012 MacBook Pro is rumoured to be in possession of a pin-sharp retina display, such as the one found on the iPhone 4S and new iPad, and will also sport a top notch Nvidia graphics card and a USB 3.0 port for speedy transfers.

It's also believed that the upcoming laptop will lack a superdrive in order to make room for a bigger battery.

Speculation is also rife that Apple will be pushing gaming and app sales on the 2012 model, which is expected to come equipped with Intel's powerful Ivy Bridge processor.

Also reportedly on board is a Thunderbolt port, Bluetooth 4.0 connective, FireWire and an Ethernet port.

Loved the MacBook Air? Then you will fall head over heels with the MacBook Pro 2012, as it's reported to don a lighter and slimmer chassis than its elder siblings.

This will make it more portable and, as far as we're concerned, a better looking piece of kit.

Watch our MacBook Air 2011 video below