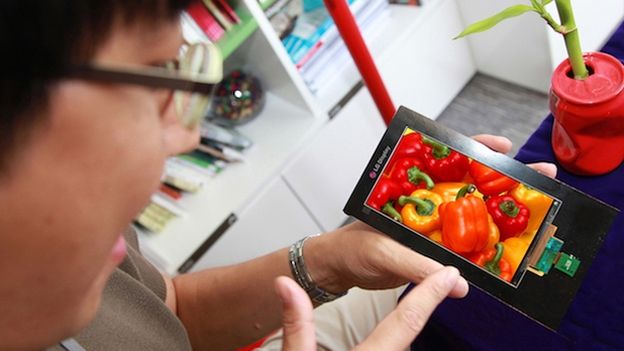 LG has unveiled what it claims is the highest resolution smartphone screen ever made.

Despite the high resolution, it is still far from besting the upcoming 4K Ultra HD standard.

In addition to sporting the highest resolution screen of its size, it is also thinner than competing screens according to LG.

According to LG, the new screen will enable “more lifelike and crisp images”.

“The new Quad HD panel will enable users to enjoy a full view of PC-version web pages at a single glance without image distortion,” it said.

“Also, even when enlarging the screen, users will be able to enjoy undistorted and sharper text.”

However, some analysts have questioned the point of such a high resolution screen.

“There's only so much detail that a human eye can pick up in a 5.5in screen regardless of how many pixels you manage to cram into it,” Windsor Holden, from Juniper Research told the BBC.

At the time of its launch, the late Steve Jobs said Apple's Retina display was the highest resolution the human eye could naturally see.

"Beyond a certain point there is a distinct law of diminishing returns. There's also the fact that the more pixels you have, the more work your graphics processor has to do.

“That has an impact on battery life, which is already being assaulted by a host of other applications throughout the day.”

Another analyst also questioned the value of such a high resolution screen.

“I think we're hitting the point at which consumers are going to focus on other issues when they decide which device to buy because so many handsets already feature a very high resolution,” Daniel Gleeson of IHS Electronics and Media told the BBC.