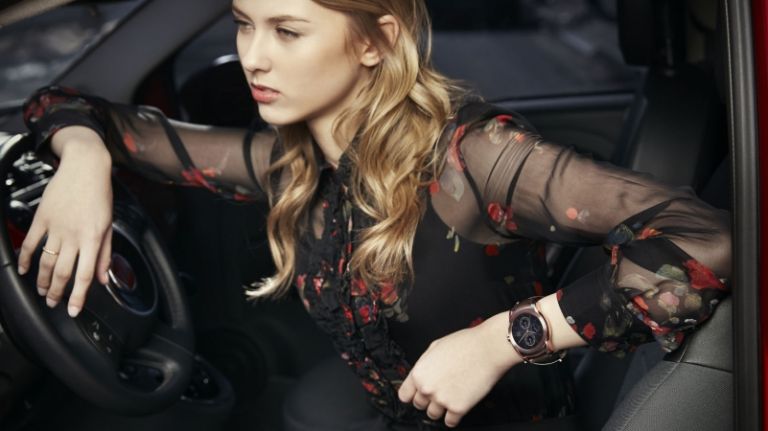 LG's new watch might look to the world like a simple fight against Apple's upcoming wrist-rester. But dig a little deeper below the launch surface and you'll see LG has given us a clever pastiche on the modern love story, told through the realms of sophistication and espressos.

Dictionary.com's definition of urbane is “having the polish and suavity regarded as characteristic of sophisticated social life in major cities”, and as you can see here the gentleman embodies those very characteristics. The buildings just about visible through the windows prove that this chap is in deep inner city.

But there's no chugging down a Starbuck's Americano from a cardboard cup for this chap - let's call him Rafe – like the less sophisticated oiks whose palates have been destroyed through cigarettes, smog and Oxo cubes. Instead he is supping a brew of the finest beans, which are almost certainly Fair Trade, with his pinkie held gloriously aloft. His pocket handkerchief screams sophistication, yet his carefully maintained stubble suggests a hint of danger (strictly within acceptable boundaries).

He's got the look, he's got the handkerchief and he's certainly got the LG Watch Urbane... but something is missing.

He is waiting for his Urbane Woman. Without her his life is as empty as his tiny coffee cup will soon be.

Here is the object of Rafe's affection: our Urbane Woman. Her name is Verity, though her friends call her 'Verily'... which she desperately hates. Here we see her awkwardly getting out of a car using just her elbows.

She only got in the car a mere three seconds earlier before realising that it's pointless driving in this city. What city? It's probably Milan, as that's where fashion and happiness lives.

She too is wearing an LG Watch Urbane, whose stylish design perfectly compliments her blouse, influenced as it is by her favourite chocolates: Cadbury's Roses.

But time is ticking down. Will Verity be able to get to her date with Rafe in time? Let's hope the Milan Metro isn't experiencing any delays.

Rafe nervously checks his LG Watch Urbane. The built-in heart rate monitor is steadily increasing as the minutes count down. 'Verity is verily late' he thinks to himself and chuckles, making a mental note to tell her that joke later. He'd mop his brow but it took three hours to correctly fold and insert his handkerchief into his top pocket.

To take his mind off things he looks at his cuff-links. They really are very, very nice.

Meanwhile Verity has clearly decided to sack off the undergound train and gone home to change her blouse to a more subdued cream affair. She's taking her sweet time getting to the date... doesn't she know how small Rafe likes his coffee? He would get another but he spent all of his money on the watch.

At least thanks to the fact that the LG Watch Urbane is waterproof Verity didn't have to take it off while she snuck in a second shower.

The meeting... of watches

Finally Verity makes it to the posh inner city coffee shop to meet Rafe. The air is electric, the attraction between the two immediate. As each lover raises their hand in greeting they see they are both wearing LG Watch Urbanes!

A quick Bluetooth sync of their phone numbers and the date can begin properly.

Sadly we weren't given the photo for this moment, but WE KNOW what LG is trying to say with this photo of the lovers' watches resting against each other. Isn't it beautiful?

Please be impressed we resisted the urge to make any 50 Shades of Grey references in this piece. Damn it.