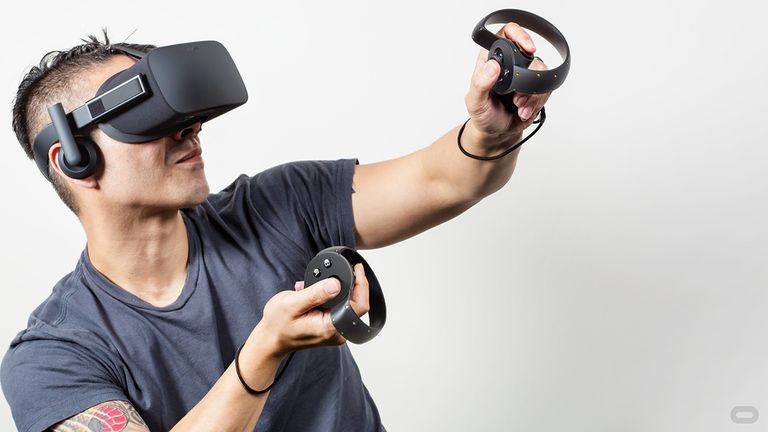 The Oculus Rift's first consumer incarnation costs £500 ($599), with the Touch controllers to be a further £100+ when they finally arrive. We actually had a guessing game in the office yesterday and a few clued-up souls did correctly guess that wouid be the cost of admission. Many of us didn't, and judging by the response, much of The Internet (by which I mean you people, out there. No, not you specifically; I mean dumb people, really) didn't either, and was quite pissed off. Well, get over it, you big babies, cos it seems to me that 500 quid is the right price.

The first reason I can say with some confidence that the price is not excessive is that it immediately sold out. If you're reading online that something is too pricey (iPhones are the big for instance here), and yet it's hurtling out of the shops faster than trainers during a riot, it's fair to say the people declaring it overpriced have it wrong. That's capitalism.

There is more to this, though.

"Virtual reality is set to be the next big thing in gaming, but it must conquer the mass market." We've heard that so many times, it seems like it must be true, right? But actually there's no reason it should be the next big, mass-appeal thing.

Who's to say VR can't be a lucrative niche aimed at big spenders, like hi-fi used to be? Who, come to that, is to say it can't belly-flop and die on its arse, if you'll excuse the mixed metaphor? It sure as hell did the first time round, as some of us are, tragically, old enough to remember?

There's also no reason VR should be just a 'thing' in gaming, either. So far, it's been used just as widely for 'experiential marketing' (selling you stuff), with forays into short films. There are numerous startups and well-established companies such as Inition who are providing corporate uses for VR. And where a gamer might buy one Oculus Rift, these companies will buy hundreds at a time.

When Marriott Hotels decided it was going to dabble in VR, it didn't buy one headset and go play Eve: Valkyrie, it bought 375 Samsung Gear S6s and 375 Gear VR headsets: that's a spend of about quarter of a million, assuming they bought them at Carphone Warehouse, which I'm sure they did.

Some of the negative feedback about the pricing seems to consist of, "Facebook owns Oculus, Facebook has shedloads of cash, why can't they sell it at a loss and hope to recoup down the line from software and improved economies of scale?"

Actually I'm being over-generous - a lot of the online critique is actually more along the lines of, "Facebook has loads of money so why can't I have Oculus Rift for £200? It's SO UNFAIR!"

Oculus' face, heart and soul Palmer Luckey says they're not making big profits on the first consumer Rift and he seems a very plausible chap. But anyway, it's not unreasonable for Oculus and its daddy to want to cover their costs. Also, if VR is not to die in a ditch like it did last time, the hardware needs to be of a very high standard. It needs to deliver memorable experiences, not headaches and disappointment. Without the economies of scale that come from using older components and having a well established user base of millions, that demands a relatively high price.

We all know that games consoles have often been sold initally at a loss, with a view to recouping via software sales and components coming down in price over the long lifespan of the product. However, that does not apply here. There are not enough people invested in VR, yet, to suggest that approach can work, and also the product lifespan is likely to be much shorter than a PlayStation or Xbox. The hardware is also new and unusual, with its mix of wearable, visual and computing components.

Ironically, while it's possible that Sony, which is in the console business, could significantly undercut the price of Oculus Rift, I now bet it won't. High-end VR at this point in time is a premium, niche concern. Google Cardboard is cool, and Samsung's Gear VR and some of the the other phone-based VR headsets are excellent products, but they're more like novelties. You get what you pay for.

Oculus Rift and, when they arrive, PlayStation VR and HTC Vive are the real deal. The latter two, and particularly Sony's headset, really do feel more like gaming accessories, and it seems to be largely gamers who are upset by the pricing of Rift. But for my money, Rift is not just a gaming device, it's something that could also revolutionise short films, marketing, retail and the workplace, if it can get through its early years without haemorrhaging cash.

Will VR survive and thrive, leaving us a cultural legacy bigger than Lawnmower Man in a decade's time? I actually don't think it will, but that's a whole other article. However, in terms of giving its device a fighting chance at least,Oculus has pitched its pricing and marketing just right with the first consumer Rift.