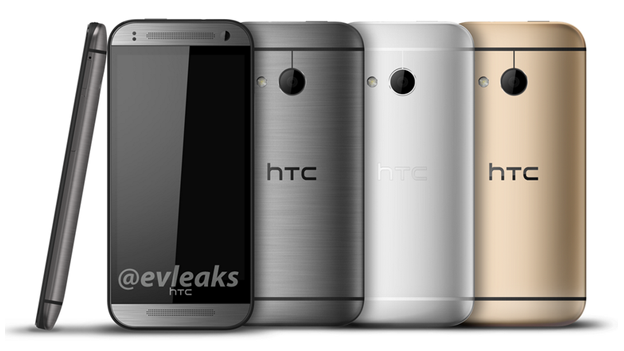 Evan Blass is at it again – this time delivering us a sneak peak at the multi-coloured goodness that is the HTC One M8 Mini.

Better known as @evleaks, Blass has posted a pretty legitimate looking press picture of the HTC One M8 Mini that comes in three colours – grey, silver and gold.

The picture also supports earlier rumours that the smaller version of its latest flagship smartphone – the HTC One M8 – will come with a 13 megapixel rear camera and not a version of the M8's 4 megapixel Ultrapixel camera.

Though it doesn't explicitly state it isn't an Ultrapixel, the lack of a depth sensor suggests it only has a single camera – making it unlikely to be an Ultrapixel sensor.

It also reveals that unlike the Desire 816 – which specs wise the HTC One M8 Mini is shaping up to be similar to – it will come with a brushed metal back.

Other leaked specs for the HTC One M8 Mini include a Snapdragon 400 processor, Android 4.4 KitKat and its new Sense 6 UI.