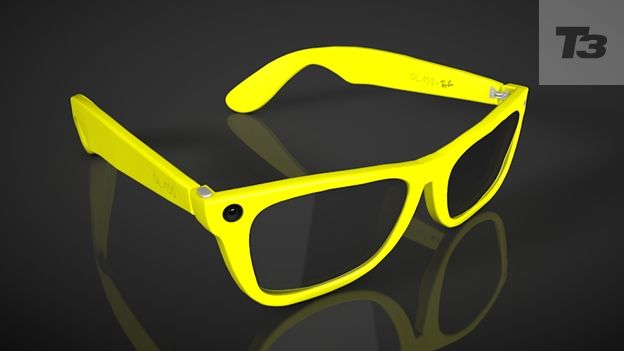 Google Glass is an augmented-reality headset created by the search engine giant to work with your Android smartphone or iPhone through Bluetooth. It is voice-controlled and can be used using controls on the side of the device.

Initially a lab-based project Glass was designed as a way for users to be always connected to the internet even when they're walking around.

To do this they came up with the idea of a completely integrated augmented-reality headset that would let you multi-task without hindering walking or movement.

With the Google Glass Explorer project now well underway we'll start seeing the smart glasses around more and more as Google signs up more testers to try them out.

The latest news is of course that Ray Ban has teamed up with Google and will be making their own unique versions of Google Glass, the partnership also means we could see Oakley sunglasses with Google Glass integrated.

For now though check out T3's take on what Google and Ray Ban could create when they launch their very own version of Google Glass.

Using Siri-esque voice control software users will be able to talk to Google Glass almost as though it were talking to a person with the glasses able to recognise a huge number of commands and requests.

Of course the biggest news has to be that Google has singed a major deal with luxury glasses maker Luxottica which happens to own brands like Ray Ban, Oakleys and Vogue Eyewear.

What this means is that not only will you be able to pair your current Glass headset with special frames made by Ray Ban but that Ray Ban will also make their very own version with Google Glass built in.

Most recently Glass was given its first major rival in the form of Recon Instrument's Jet headset which was actually launched at Google I/O 2013 where developers had gathered to find out more about Google's digital ecosystem.

Google Glass has caused a stir in the United States where it is already looking to be banned for use while driving in a number of states.

Campaigners in the UK have also spoken out about the issues surrounding privacy suggesting that by having a camera that can be 'always on' Google is breaching privacy laws.

Google Glass is essentially a metallic frame with the hardware attached to the right-side. Despite the size of the the glass eyepiece and the input controller the whole unit weighs in at just 42g.

Google Glass has Bluetooth and WiFi, there has no confirmation however that there will be a Google Glass 3G instead it's believed the headset will use data through your iPhone or smartphone.

It also comes with GPS to aid in location tracking and will sport touch controls on the device itself while a mic means it'll be voice-controlled.

Google Glass has a 5MP camera, first demonstrated when Google's Sergey Brin unveiled the Glass through a Google Hangout between himself and skydivers who were also using Glass headsets.

The Glass camera can shoot video up to 720p and then share that with either YouTube or to contacts via Google+ Hangouts. While we know the screen on Glass is capable of showing full colour images, maps and basic information there's no word on an actual resolution of the display.

Google's own words are that this is a HD capable screen that will recreate an image to the equivalent size of 25-inches, while that's nothing on the Sony 3D Personal Viewer it's certainly impressive given its size.

Google Glass has an official price tag of $1,500 (£992), this was set for competition winners who will be able to get Google Glass early.

It's believed that a fully consumer-ready version will be available late 2013 or 2014 at a greatly-reduced price so it can compete with the smart watches that are reportedly set to appear later this year.

At present Glass has been released in an 'Explorer' version which has been built for competition winners and developers allowing them to work on building apps ready for the products eventual consumer release.

It's then believed that a much cheaper version of Google Glass will become available with a projected release date of late 2013 or early 2014.