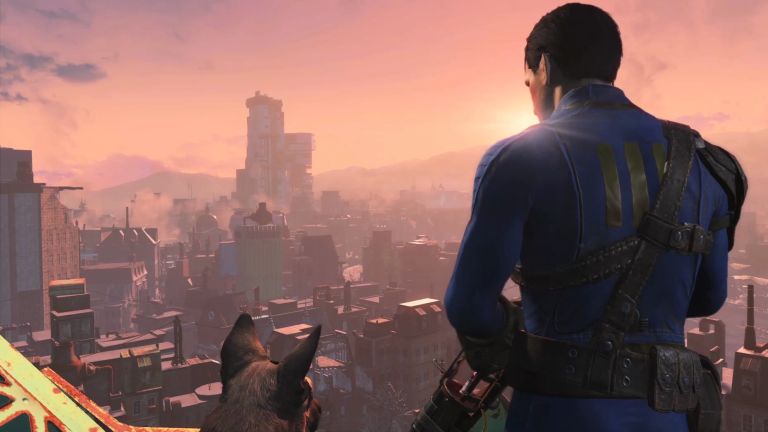 With the massive gamesgasms that were E3 and Gamescom there are a lot of games we're getting super-excited about this year, but few more so than Fallout 4.

There are few things in this gaming world as haunting as Ron Pearlman's opening speech from the original Fallout, but while war never changes, the RPG has and the Fallout franchise has just grown and grown.

Fallout 4 could be the best yet, and here's why we're getting so damned excited about it.

When's it out? November 10 2015
What platform? Xbox One, PS4, PC
What is it? Post apocalyptic role-playing game

The original Fallout was an isometric RPG, with turn-based combat and a neat line in morally-dubious adventuring. It starred you, as the Vault-dweller, being despatched into the post-apocalyptic Californian wastelands to try and save your home by any means necessary.

It allowed you to play through the open-world story in your own way, making decisions that had wider ramifications than just on your immediate surroundings.

Eleven years later Bethesda had picked up the rights to the franchise and created a new, immersive, 3D wasteland for the new Vault-dweller to explore.

Fallout 3 and it's follow up, Fallout New Vegas, followed the same morally-dubious ethos that made the original such a joy to play and re-play, but added more visceral combat and a vast gameworld.

Fallout 4 is taking the best of the last two games, and Bethesda is building on everything it has learned.

And the lights all went out in Massachusetts...

The E3 reveal showed something we've only ever seen in the Ron Pearlman Fallout intros, what the world looked like pre-apocalypse.

You and your character will actually get to experience October 23 2077, the calamitous day the bombs dropped, as well the panicked rush to get to the safety of Vault 111. Then, 200 years later, you'll awake to find yourself the sole survivor.

Shenanigans are liable to ensue…

The main gameworld is going to be set around what is likely to be the main hub, Boston, Massachusetts, but you'll also get to explore further afield around New England.

In series lore, that's the Commonwealth.

The beloved canine companion from the previous games is making a return. Dogmeat is going to be an erstwhile companion of the main character and, for all you dog-lovers out there, he just can't die.

He can though maul and maim anybody you choose as well as find you loot.

For the first time in the series the main character is going to be voiced, and you also get to choose whether you play as a female or male. Which is all going to be handy considering there will now be the opportunity to get all romantic with your companions, whichever sex they are (though hopefully not with Dogmeat).

From the basic relationships you could form in Bethesda's last RPG classic, Skyrim, Fallout 4 is looking like it's going to have a slightly more developed system.

We love our dogs, and being able to build them a lovely little home is one of the main reasons we're getting so excited about Fallout 4.

Well, actually building a home for ourselves is the really exciting part, but it's nice to be able to share the wealth with your four-legged friend.

Being able to build your own entire settlement is one of the biggest advances for this latest iteration of the franchise, allowing you to place buildings where you choose in this New England wasteland. Hell, there's even a functional power grid system to give it that proper Sim City feel...

But you're not limited to one settlement. Oh no, you can create your very own game of post-apocalyptic Transport Tycoon as well and build multiple settlements in-game, creating caravan trading routes in between them. Where caravans go though, so do raiders…

Tying directly into the new settlement system is the idea of crafting.

A long-time staple of many an RPG, the new Fallout 4 crafting system will enable you to get busy with the powered armour we've been longing for since the first games.

And there's two words I just want to leave here while talking about the powered armour: jet pack.

The crafting system will also allow you to create your very own bespoke weapons. There are over fifty base guns which can be kitted out with a variety of different modifications as you see fit.

There are reportedly over 700 different mods to play with, and while it's unlikely to get to Borderlands levels of crazy gun-play that's a lot of different toys to create and play with.

These little boosts are now tied into the SPECIAL skills rather than your specific character level, and deliver handy boosts to your stats as well as new abilities. So long as the Bloody Mess perk is still there we'll be happy.

There is though no level cap to the game. Once the main quest is completed you'll still be able to traverse the wasteland, turning yourself into some sort of post-apocalyptic Superman with the 275 different perks that exist out there.

The Vault-Tec Assisted Targeting System (VATS) is also making a welcome return, though instead of actually freezing time completely it now only slow it to a crawl. You're going to have to be a little more nimble than in previous games when it comes to combat.

Obviously the Pip-Boy is going to make a reappearance too, but this time you'll actually be able to use your tablet or phone as a second screen Pip-Boy connected with the game.

The weapons and armour aren't the only things getting modifications - the game itself is going to fully support modding from the get-go. And that's not just for the PC gaming elite either, the Xbox One gamers are also going to be able to use the growing synergy between Microsoft's console and the PC by using the same selection of mods.

Potentially PlayStation 4 players will also get access to the mods party later on down the line, though nothing has yet been confirmed.

And here's the teaser trailer to really get those juices going...