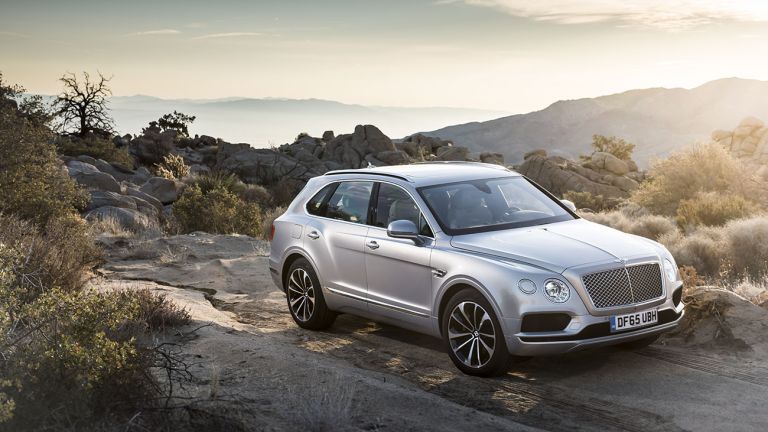 What do you get when you combine a racing heritage, with ultimate luxury and SUV styling? The Bentayga, of course, a car which, according to Bentley, is “the fastest, most powerful, most luxurious SUV in the world'.

Very bold claims indeed, and we recently had the pleasure of putting those claims to the test. How does the Bentley Bentayga stack up? Read on to find out...

The fastest? Well, the Bentayga can reach 62mph in 4.1 seconds and go on to hit a top speed of 187mph. That's certainly one of the fastest accelerating SUVs (beaten only by the Porsche Cayenne Turbo S), and we can't find any SUV with a higher top speed.

Not even the Porsche can match the Bentayga for power though, as the Bentley's engine (which must be the size of a city car) produces an tarmac shattering 600 bhp.

And finally, luxury. Well, just look at the cabin:

It's a lovely place to be in - almost every surface is covered in either high-quality leather or wood veneer. And little details, such as the metal air vent tabs make the Bentayga just that little bit more special than other SUV interiors.

Of course, we can't talk about the Bentayga without mentioning how it looks. You can make up your own minds here - we've met some people who really like it, and some people are physically repulsed by it. We're more the former, it's much more subtle in the metal, and in a dark colourway, than the first, gold press shots would have you believe. Still, it certainly gets a lot of attention when out and about.

We've already touched on some of the Bentayga's astonishing figures - 62mph in 4.1 seconds and a top speed of 187mph. That's epic for a vehicle that weighs 2,422 kg.

Those figures are achieved with the help of a 6.0-litre W12 engine pumping out 600bhp and 663lb ft of torque. Gearing is handled by the silky smooth eight speed ZF gearbox.

Of course, that sort of performance takes a toll on the fuel tank, and the Bentayga manages a claimed 22.1 mpg and emits 296 g/km CO2. Still, the cost of fuel is unlikely to put off many potential Bentayga owners.

We drove the Bentayga from London to North Norfolk and back in one day - the way this car eats up miles is seriously impressive. It's an overtaking machine, and at the end of the day, we felt as if we could do the journey again as it was so comfortable.

While it's more at home on the motorway, the chassis can also hold its own on more bumpy and twisty roads. Although there's still quite a bit of body roll, so it's no Range Rover Sport SVR or Porsche Cayenne. It's very much a 'fast luxury SUV', rather than a 'sporty SUV'.

And what about off-road?

We didn't dare take the Bentayga off-road, but Bentley is pretty confident of its go-anywhere ability. You can also find plenty of videos on Youtube of people braver than us tackling some pretty extreme terrain.

Of course, very few Bentayga owners will be taking their £200,000 SUV off-road, but it's reassuring to know it can easily cope with a muddy field at a polo match.

The Bentayga is like the tech department at Harrods - it's packed with technology for both the driver and the passengers.

Let's start with driver tech - this thing is seriously easy to drive. There's lane assist to keep you within the lines (you don't really need to touch the steering wheel), and there's adaptive cruise control which keeps you a set distance from the car in front. It even works in traffic jams.

There are also the supremely comfortable seats, which offer all levels of electronic adjustment, as well as a very effective massage seats.

This took the stress out of a long drive to Norfolk and left us feeling less fatigued than we usually would.

The infotainment system is an 8.0-inch colour touchscreen with a 60GB hard drive - it runs Audi's MMI interface which can take some getting used to, but is pretty simple after some time with it.

Our vehicle had the Naim for Bentley sound system in, which, unsurprisingly is one of the best systems we've ever heard in a car. Naim really know what they're doing - just look at the number of T3 Awards they've won. This produces almost 2,000 watts and has subs mounted in the seats so you can feel the music. The only downside is that it costs £6,300.

Rear passengers can be entertained with the two detachable 10.2-inch Android tablets. These can stream from Netflix, browse the internet, play games, or watch live TV.

Of course, there's plenty of other technology throughout the car, from the touch sensitive lighting, HUD, and the soft-close doors.

A lot of people seem to dislike the Bentley Bentayga, and we can see why, but after we'd spent time driving it we quickly became upset that we'd never be able to afford one.

Sure, it's not the most attractive or subtle car, but that doesn't matter when you're inside driving it, because you're being massaged by hand-stitched leather seats, and every surface is finely crafted with a lovely attention to detail.

And then you put your foot on the accelerator and leave the disapproving glares in the distance as you tear towards your destination.