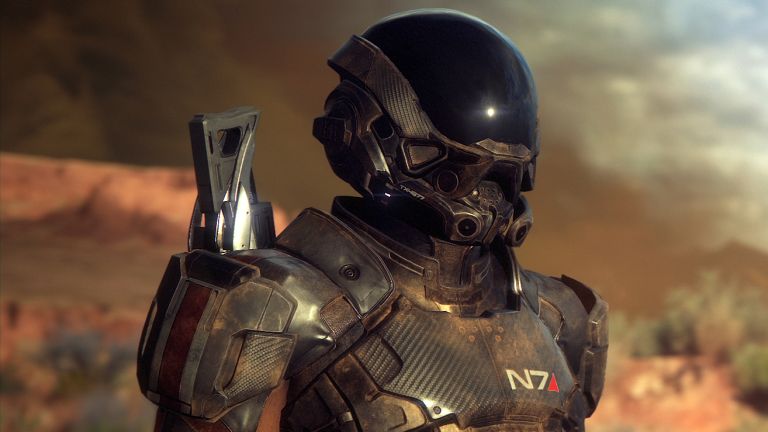 There’s no picking up where Shepard left off. That storyline is done, and BioWare want us to see something new.

Your name is Ryder, you’re a Systems Alliance soldier, and you’ve been frozen for 600 years. You wake up in a brand new galaxy as part of the Andromeda Initiative, ready to colonise seven planets billed as ‘golden worlds’. But, behind the glossy advertising that convinced tens of thousands of colonists to sign up, the expedition is a shambles.

The Milky Way’s long-range telescopes got it wrong. Ships are missing. The natives are hostile. And, with the Initiative’s leadership is in tatters, characters are forced into roles that they’re woefully underprepared to take on.

Nepotism rapidly elevates you to the position of Pathfinder and, in true BioWare style, the weight of the galaxy hangs on your shoulders.

Before we start the review, let’s address the elephant in the room.

Wait.. my face is tired? Is this an in-game explanation for the facial animations? pic.twitter.com/W5boDLT5IsMarch 16, 2017

There are some weird faces in Andromeda, and Foster Addison is just plain creepy. But we’re ok with that, and here’s why.

The game is enormous.

It’s easy to find faults in a game this huge. A weird animation here, a painful line of dialogue there. We've had the odd laugh-out-loud animation moment, some lag and an unexpected drop through a floor, but it’d be a crying shame to let a wonky face or a wobbly knee get in the way of everything else Andromeda has to offer.

So without further ado, let’s get on to the good stuff.

It’s chaos out there, and you’re in charge

Your role as Pathfinder is reminiscent of that of a dowser with a divining rod. With no real training other than some years spent as a soldier in the Alliance Military, you become the Milky Way’s sole guide and envoy in an uncharted galaxy. It’s not only up to you to secure a home for thousands of stranded colonists, you must also lead the way in diplomatic relations with alien races and even set the precedent for a burgeoning Andromedan legal system.

The Andromeda Initiative was the brainchild of a billionaire with a big dream, and no-one seems to knows what they’re doing.

We’re not sure whether the plot has holes, or if it's holding a mirror to the pitfalls of private colonisation projects like Mars One. Either way, Ryder is an inexperienced amateur thrust into a position of absolute power and it’s hard not to experience imposter syndrome.

This stands in stark contrast to the path taken by the veteran Shepard centuries before, but the critical advantage for the player is that Ryder, and Andromeda, are yours to define. The new conversation system allows you to mix and match up to four tonal responses - emotional, logical, casual and professional - and without Shepard’s baggage, it feels much more natural to take control.

And, if you can suspend your disbelief, this game’s going to suck you in.

You'll get lost in the world...

Andromeda is enormous to the point of overwhelming. The environments are gorgeous, and the rooms and corridors that led you through the original trilogy have been replaced with open worlds.

With this freedom comes all of the usual trappings of an open world game - the space between mission objectives is littered with enemies whose sole purpose seems to be to slow you down, and your map will be peppered with fetch quests. Whilst this might seem like filler at first glance, in-game it feels like a necessary part of getting to know your new environment, so it isn’t too much of a grind.

You'll be scanning every unknown object, animal or enemy, and if it’s rare and unusual, you’ll be rewarded with research points that you can spend unlocking blueprints to craft new kit. It’s reminiscent of BioShock's photography, and we frequently found ourselves reaching for our scanners before our guns when new enemies appeared.

Exploration is assisted by Andromeda’s Mako - the Nomad. And it’s a big improvement over the original. With six wheel drive enabled, boosters on, and a bit of well-timed jumping, we’ve coaxed it into climbing vertical walls, and we’ve yet to flip it over. It’ll eventually catch fire and explode if you subject it to too much environmental abuse, but you can research upgrades to its armour, life support and handling.

Back out in the galaxy map, travel between worlds is a bit painful. First-person fly throughs take you from one planet to the next, and they’re pretty, but they take an age. After visiting your 20th planet, you’ll be wishing they’d made the transitions a bit faster.

The planet scanner is also back, and it moves like glue. But, as with the handheld scanning, it’s worth it to snatch up those extra nuggets of galaxy lore. And you can usually spot anomalies by eye, saving an arduous crawl across the planet's surface.

The UI is a force to be reckoned with. It’s got folders within folders, a bizarre system of mission categorisation, and no sensible way to sort your inventory. Keeping track of quests is a nightmare - and this is a problem because there are loads them. Thankfully, the map has it handled, and we used it almost exclusively to plan our next moves.

Menus light up constantly with little exclamation marks to indicate new content. You’ll pick up dozens of blueprints to craft your own weapons and armour - some familiar, others adapted from native Andromedan tech. There are augmentations to add to your crafting recipes, resources to build the kit and salvage that you can sell for credits.

If there’s one thing you have in spades in Andromeda, it’s choices.

You'll be jumping out of cover and into the air

For the first time in the Mass Effect series, the combat feels dynamic. Your jetpack enables rapid jumping in all directions, including a forward dash, and you can hover for a short time in mid air to assault enemies from above. Combine a jump with your omni blade and you’ve got a powerful aerial slam.

Cover is still critical, but it feels more fluid. Any large object becomes a refuge, and you’re fighting out in the open instead of advancing along a corridor. The game encourages you to make full use of the space with enemies that flank, cloak, fly, or, with no regard for their personal safety, eschew cover in favour of walking right into your guns.

You can expect to come up against aliens, robots, and a veritable bestiary of unusual animals. And, as promised, you are no longer tied to a class and can allocate your skill points as you please. Want to be a combat specialist with a biotic lance and a tactical cloak? Go ahead.

Insanity (the hardest difficulty setting) is, predictably, insane. We jumped in at the deepest end of the Mass Effect experience, and in places it’s pretty rough. It’s a test not only of skill, but also of patience, not least because it’s not always possible to save manually and checkpoints are painfully far apart. But, it comes with that same sense of satisfaction as the original series, and a rare achievement if you manage to complete it all.

You’ll need your crew by your side

Mass Effect has always been a team game, and Andromeda has a lot to live up to in terms of companions. A Garrus-shaped hole in our gaming experience was quickly filled by Drack, a grizzled war veteran whose idea of support in times of emotional crisis comes in the form of an email containing dozens of low-res pictures of guns.

Compared with the older titles, it does feel like the roster fills up too fast. People take little in the way of convincing to join your team, and very soon after starting, you’ll be at full capacity. The upside of this is that you’ve got more time to get to know people, and, as always, they have a lot to say.

In combat, the team have a nice mixture of abilities, but you’ll find you've lost fine control of their actions. You can still rein them in by manually assigning targets to attack or defend, but the wheel to select and direct squad-mate powers is sadly gone. This detracts a bit from the feeling of tactical leadership on the battlefield, but does have the benefit of making the encounters feel much more real-time.

It's time to start again

We’ve lost Shepard, but Mass Effect: Andromeda feels like a love letter to the original trilogy. It’s crammed with content, old and new, and BioWare has gone out of its way to create a character and a world that can grow as the game develops.

The prologue is long. It’s not until you leave the first planet, Eos, that the training wheels come off and the world really opens up, but it’s worth battling through the beginning to get to the real meat of the game.

We’ve yet to finish the main plot-line (did we mention this game is huge) - so we’re not ready to make a judgement about the story arc, but as an opener to a new chapter in the Mass Effect universe, we’re looking forward to seeing where this goes.