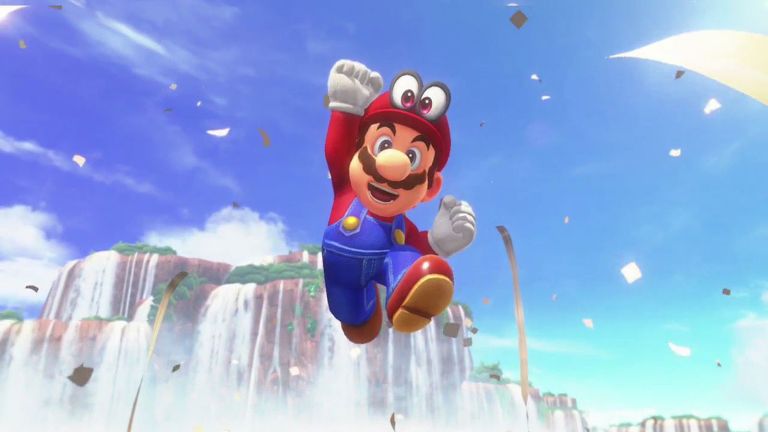 Riding into E3 on the back of a monumental rebound, it's been a good year for the big N. And, in the face of the reveal of the Xbox One X and the PS4 exclusive Spiderman, they've turned Mario's hat into a boomerang, put a moustache on a dinosaur and teased two of the most exciting games of the week.

This is the Nintendo we know and love. Watch their E3 spotlight below, or read on for the best bits.

Everyone's favourite plumber took centre stage at the Nintendo Treehouse this year to showcase Super Mario Odyssey, set for release on the 27th of October

This adventure pits Mario against an evil band of wedding planners, armed with nothing but a hat. Said hat, known as Cappy, is actually a dapper looking boo, but spends most of his time as a googly-eyed version of Mario's signature cap.

Cappy can be thrown using Joy-Con motion control, hitting enemies or 'capturing' animals and objects, letting you temporarily take control of a t-rex, a taxi, or a stack of moustachioed goombas.

The game goes back to the chaotic, open world joy of Super Mario 64, but breaks all of the rules. It's not set in Mushroom Kingdom and, for the first time ever, you can actually spend your coins. Hearts have also been replaced with a small monetary penalty that makes death look pretty much painless.

Here's the game in action.

Odyssey wasn't the only Mario game showcased at E3. Ubisoft were also finally able to show off Mario + Rabbids: Kingdom Battle, following leaks that revealed the game ahead of schedule in May.

Here, the Mushroom Kingdom collides with Ubisoft's Rabbids in a chaotic turn-based RPG. With Peach Castle as a central hub, the game will take place over four worlds, promising lots of puzzles with multiple solutions.

It's exclusive to the Switch and hits the shops on August 29th.

And, as if that wasn't enough, Treehouse Live also previewed Mario & Luigi: Superstar Saga + Bowser’s Minions, rejuvenated for the 3DS for release on 6th October.

The game has the same 2003 pixel art, but has been updated with 3D lighting and the new 'Minion Quest' mode, which you can see in action below.

New amiibo were also announced, adding a goomba, a koopa troopa, and wedding-ready Mario, Peach and Bowser to the lineup.

Nintendo saved this surprise reveal for the Treehouse livestream. Metroid 2 is being revived for the 3DS as Metroid: Samus.

Originally released on the GameBoy in 1991, it has had a complete overhaul. Samus can now aim in all directions rather than snapping 45 degrees, she’s got new abilities, including a melee counter, and the map can be pinned and labelled. Best of all, a teleport system has been added.

It's coming 15th September, and the special edition will include soundtracks from across the Metroid series. There will be two new amiibo; a squishy metroid and a Metroid 2 Samus.

And, that's not all for Metroid fans. In a goosebump-inducing teaser, Nintendo revealed a brand new Metroid game in development for the Switch.

Metroid isn't the only fan favourite getting a new title. Following the slightly disappointing announcement that Pokemon would be coming to the Switch in the form of Pokken Tournament Deluxe, Nintendo had a gift for fans at E3. Game Freak are developing an RPG pokemon title for the Switch.

Although release is more than a year away, that’s the news we all wanted to hear.

After Breath of the Wild, there were no huge Zelda announcements to be made this year, but Nintendo did give us a closer look at the upcoming DLC.

We've already had a look at the first pack, The Master Trials, but it's now got a release date of 30th June, and we had a chance to see the game in action.

Whilst pack actually looks pretty weak content-wise, it was the tease of the second DLC that really caught our attention. The Champions’ Ballad trailer revealed a sepia-toned Zelda alongside the four champions Daruk, Mipha, Revali and Urbosa, hinting at a possible return to Hyrule past.

It's coming at the end of the year, and each champion will also be released as an amiibo, though what they’ll do remains a secret.

And if you're looking for a little more Link in your life, Bethesda also had a treat for Switch players at their conference on Monday.

We knew that Skyrim would be coming to the Switch this year, but with a little help from an amiibo, Link can swap Hyrule for Tamriel, taking Breath of the Wild kit, including the Master Sword, with him. And, in a nod to Link’s Crossbow Training, Skyrim players on the Switch will be able to use their Joy-Cons to shoot arrows with motion control.

We also got a detailed look at Fire Emblem Warriors ahead of its release in the autumn, with a new trailer and a gameplay reveal. This unlikely mashup combines the tactical RPG Fire Emblem and the fast-paced, hack and slash Warriors, in an odd combination that actually looks pretty promising.

Nintendo has gone out of its way to find a balance for fans of both franchises. It's got insane looking criticals and vast enemy hordes to keep Warriors fans happy, and for Fire Emblem nuts, there's a new story, a new hero, full voice acting, and stacks of easter eggs.

The best of the rest

Coming Christmas 2017, it looks like this iteration of Xenoblade franchise goes back to the core of the first game, and adds in Pokemon-like elements with collectable 'Blades' that function as your powers and weapons in battle.

Kirby and Yoshi are back

Platform favourites Kirby and Yoshi are back again for 2018, each with a short teaser. Yoshi brings Fez-like turns to its side-scrolling world, letting you go around corners, and Kirby's got co-op and some interesting looking new abilities.

Rocket League arrives on the Switch at the end of the year, bringing exclusive customisation and battle items, including Mario and Luigi's hats. Most excitingly of all, cross-network play will be supported so that you can battle your friends on Xbox One, Windows 10 and Steam.

Ubisoft also revealed brand new IP coming to the Switch in Autumn 2018. Starlink: Battle for Atlas is a Skylanders-style toys-to-life game set in open world of the Atlas star system. Expect dog fights, aliens, and customisable ships that can be switched up mid-battle by clipping parts to your controller.

12 months ago, Nintendo were floundering. Now, they're back to their old tricks, reviving classics, mashing up IP and bringing us the multicolour, multiplayer gameplay that we know and love.

The best of their announcements are still deep in development, but there's more than enough to keep us occupied until Pokemon and Metroid land.

And if you want to relive it all again, here’s all of day one.