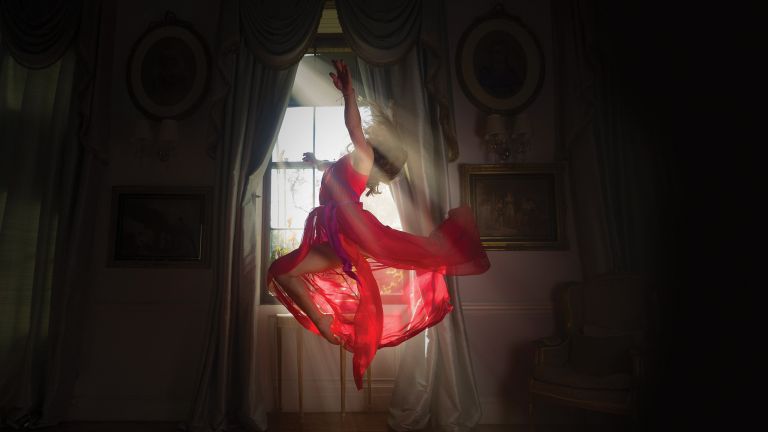 Dawn breaks over the grounds of a leafy country pile in Hampshire, as Eythóra Thórsdóttir revs the engine of a gobstopper-red 1960s Volvo P1800 - waiting for the director’s call. It’s action! And in a true display of her footwork prowess, the Olympic gymnast pulls away in an instant, motoring swiftly up the drive.

Welcome to the set of Let The Light In – a film with rich contrasts and a stirring score that draws you into the mastery of the new flagship 934 and 984 OLED+ TVs from Philips. For a truly immersive audio-visual experience, with pockets of dream-like slow motion, the crew is equipped to shoot in 4K Ultra HD at up to 1,000 frames per second.

Stepping inside the house, strewn with dusty antiques and old-world furnishings, Eythóra throws back heavy drapes, allowing light to stream across the sepia floorboards. And it’s here that she begins a stunning barefoot floor routine complete with backflips, somersaults and high kicks. A Dutch gymnast with Icelandic heritage, the 21-year-old is a European silver medalist and has competed at Rio 2016 – now with her sights set firmly on Tokyo 2020. Her bespoke performance and flowing red chiffon dress - illuminated by the morning light - really shows off the power of OLED+ from Philips.

It’s partly the magic of TV though, as to achieve consistent natural light the crew had to set up a “hazer” water vapour machine indoors and smoke machine outdoors - then train lighting rigs through the windows to create the illusion of soft dawn rays.

You’ll note every detail on the 934 and 984 models, which are powered by a third-generation P5 engine, from Eythóra’s ethereal dress to her lifelike skin tone – and not to mention the incredibly smooth motion in those backflips. One prominent theme of the film is going from dark into light – the ideal opportunity to show off contrast with OLED+’s true blacks. OLED+ allows pixels to be controlled individually, with no backlighting. This means blacks are true blacks – as seen when the Volvo P1800 is being driven through darkened woodland.

With HDR10+ (High Dynamic Range), original details are preserved and colours look real. It’s all thanks to dynamic metadata that means brightness boundaries can be set and changed on a frame-by-frame basis. Viewers will get to enjoy the full colour range even in scenes that contain only dark or light elements. Then there’s Philips’ own Ambilight technology. This uses LEDs to project the colours you’re watching onto the wall behind, illuminating the room and immersing you in the action.

How they did it

Director Leigh Emmerson knew that for a TV displaying 60fps, he’d mostly need to shoot at 120fps using a RED Gemini camera. However, a second camera – the Phantom VEO4K – was also used. He says: “The Phantom’s party trick is offering up to 1,000fps – ideal for super slow-mo. But we actually only needed about 400-500fps.” Quickly eating up terabytes of data, it was used to shoot only at certain moments, such as the billowing of the dress or particles of dust floating in the air. The film has also been graded for cinema quality using Dolby Vision.

Because these Philips TVs were engineered with an incredible Bowers & Wilkins audio package built in, Let The Light In needed a score to match. So it was in Studio 2 of Abbey Road Studios, where The Beatles famously recorded, that a group of A-list session musicians gathered to perform. The bespoke composition creates tension and injects drama into the film, adding to the sense of visual contrast.

“It’s about letting the music unravel slowly and building this journey,” says co-composer Thomas Balmforth. Fellow co-composer Bob Bradley agrees: “You get goose bumps when you hear the music played in a place like this. We’re making sure the mix is really broad and wanted to show the full spectrum of what the TV has to offer.”

Joint engineering with Bowers & Wilkins has resulted in market-leading sound from the TV’s built-in speaker enclosure (934 model) and sound system (984 model). Under a cathedral-like ceiling, the orchestra falls silent and you can hear a pin drop. Then the strings and grand piano strike up once again. Up in the mixing studio, each individual instrument is isolated and finely tuned. It’s particularly important for a TV audio package that delivers Dolby Atmos upfiring (934). And these real-life instruments are the ideal companion to superb, lifelike colour as offered by Philips.

Watching the finished film, it’s clear that these TVs from Philips are the complete package. So how does it compare watching Eythóra dance in person? Creative director Paul Frost says: “One amazing thing was how light she was on her feet. Being a gymnast obviously she would know how to shift her body weight but it was almost silent as she was tumbling and back flipping on a hard wooden floor. It was almost as if I was watching her on television.” In fact, with the Philips 934 and 984, the difference between real life and TV is almost indistinguishable.

Discover more about OLED+ at Philips.com/oled+