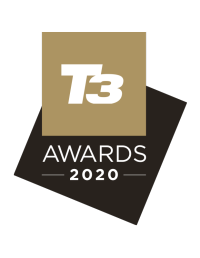 This year has been The Year of the Electric Bike (and the electric scooter). Okay, it has also been the year of various other things, but let's emphasise the positive. Romping home with the prize for the best electric bike at the T3 Awards 2020 is an e-bike that took all the best elements of the genre and then added a whole load of additional elements, just because it could.

The result was an assisted bicycle that claims to be thief-proof; which is so easy to ride it could be called idiot-proof – although perhaps that is tempting fate – and which looks the absolute bee's knees. And probably the murder hornet's elbows, too.

VanMoof S3: we know not know how to pronounce you, but we salute you. Van Moof?  Van Mouth? Van Mauve? We may never know.

The Dr Dre Powerbeats – winner of the T3 Award for running buds – was helped to the trophy by a nifty bit of price cutting compared to its predecessor. However even that pales in comparison to the VanMoof S3. This e-bike of the hipster gods improved in just about every regard over the old S2, and then lavished us with a massive price cut compared to its forerunner.

For under £1800/$2000 you get a helluva lot of e-bike with the VanMoof S3. Not only does it have disc brakes, bright integrated lights and automatic gear shifting, if you please. There's also an anti-theft system comprising of a magnetic lock/immobiliser for the back wheel, an alarm – complete with an animated laughing skull on the crossbar for true 8-bit thief-mocking supremacy – and even GPS tracking should anyone get past them.

Remarkably, VanMoof is even committed to going and retrieving your S3, should the unthinkable happen.

Because of the motor and because it's so sturdily built, the VanMoof is a lot of fun to ride. It's quick but it's very stable. Or, looked at another way, it's sturdy yet fleet-footed. The weight means you probably won't want to drive it without any assistance but you can dial it down via the VanMoof app, so as to get more of a workout.

With the motor at full strength and the five gears changing up and down by themselves, there's really not much left to worry about besides looking where you're going, and ensuring that you are looking dapper. The unique shape of the VanMoof S3 – and it's smaller sibling, the more compact X3 – will mean a lot of eyes are upon you.

As more and more of us seek to avoid traffic jams and public transport, the VanMoof S3 is a ride whose time has come – that's why it's our winner here.

Duncan has been writing about tech for almost 15 years and fitness ever since he became middle aged and realised he could no longer rely solely on his boyish good looks. He used to be on telly loads, but an unfortunate incident put a stop to that, so he now largely contents himself with telling people, "I used to be on the TV, you know."
Pre-lockdown Duncan was widely regarded as the best-dressed man ever to work for T3 – admittedly not saying much. Post-lockdown he is looking forward to wearing clothes other than shorts and hoodies again very soon, assuming he can still fit into them. He currently writes about cycling, fitness tech that isn’t too heavy, and all things kitchen and home related.