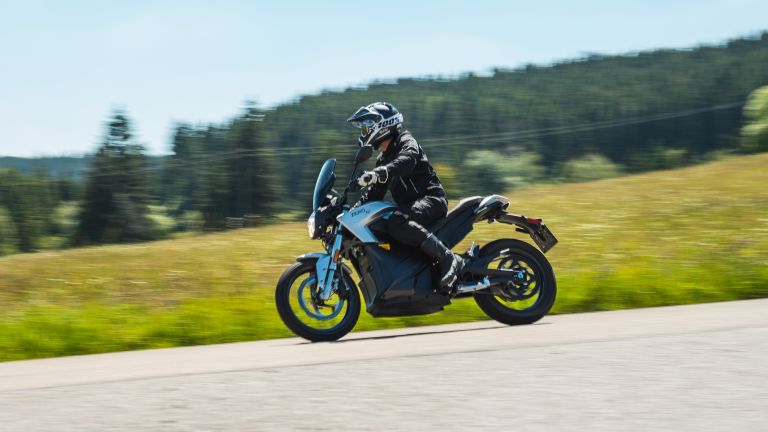 There’s a group of 12 of us riding through the winding roads of the Black Forest in Germany. We’re on Zero electric motorcycles, most of which produce more torque than a MotoGP race machine. I’m on a 2018 Zero S, a naked street bike, while there are various other models of Zero bikes in our group, including a bunch of Zero DSR Black Forest Editions, a new addition to the range which has been built with touring in mind.

We’ve just left the city of Freiburg, near the Swiss and French borders, and today we’ll cover 120 kilometres in a circuit consisting almost entirely of twisting mountain roads with a bit of urban and freeway riding thrown in for good measure.

Within minutes of leaving the start point, the front of the group starts to pull away and then the bike in front of me makes a whooshing noise and rockets forwards.

Seeing the gap open, I twist the throttle and I, too, am hurtled ahead towards the next corner, accompanied by the urgent, banshee-like whine of the motor beneath me. It sounds like I’m riding a Lightcycle from Tron and I can’t help but grin.

That ridiculous amount of torque, with its futuristic engine note, is utterly addictive and I find myself repeatedly slowing down so I can speed up and experience it again and again.

I won’t lie: when I first learned how much torque these Zero bikes produce I was nervous. I had visions of opening the throttle and either pulling an inadvertent wheelie that would throw me off the back of the bike, or being catapulted forward into the nearest tree. And there are a lot of trees to be fired into in the Black Forest.

Rather boringly, neither of these things happened. Power delivery was smooth and predictable and the bike was entirely manageable for the duration of the ride.

Electric motorbikes have no gears, so the left handlebar is devoid of a clutch lever, and there’s no gear shifter under your left foot. Before we set off, I was convinced I’d be constantly reaching for those phantom levers, like a man who’s had his leg amputated feeling it itch. But instead I adapted to the bike immediately and never gave them a second thought.

Seriously, it’s easier than you think, this electric motorbiking.

The bikes are also completely silent when you start them up, with only the lights on the dash providing a clue that you’re ready to go. When you want to go, you simply twist the throttle. Conversely you just let go of it and apply the brake to come to a stop.

And when you do come to a quiet stop, the fact that the motor puts out so little heat compared with a petrol engine means you won’t be sweltering at the lights on summer days.

By default, the Zero bike has two riding modes – Eco and Sport. Eco dials down the power making the bike more beginner friendly and extending the battery life, while Sport mode unlocks the full tyre-shredding potential of the electric motor. You can also customise the bike’s set-up using a smartphone app which allows you to set the top speed, torque and regenerative braking levels.

There were two things that really stood out to me when I was riding the Zero.

One: holy smoke, there’s a lot of torque on tap. This makes overtaking so easy. A twist of the throttle takes you from 0-60mph in under five seconds and that instant burst of acceleration is also available at any speed. Not having gears to shift through also means the power comes on in a predictable, linear manner right up to the top speed.

Two: unless you are accelerating hard, the bikes are near-silent. This connects you with your environment in way that being on a petrol-powered bike doesn’t. I could talk to my riding companions as they pulled up alongside me, much as I might while on a bicycle. At one point a rider in our group slowed and pointed to the right. In a field next to the road, a deer stood and watched as we rode silently past. That wouldn’t have happened had we been on a dozen petrol-powered Ducatis. When we pulled up in lay bys, other bikers looked at us with curiosity, while people standing outside their houses as we rode by looked both bemused, but also grateful.

Later, we were sitting at the traffic lights in a small village, and I could hear the sound of water running in a stream next to the road. It was so oddly quiet that one of the guys beeped his horn just to break the silence and everyone erupted into fits of giggles.

Does being on a near-silent bike put you at risk from people who can’t hear you? I don’t know. Where we were riding, there were so many bikes on the roads that car drivers were no doubt being especially careful not to swerve and take a dozen of us out. And no distracted pedestrians stepped out on front of us, either.

Indeed, if quiet bikes are a danger to their riders, as some bikers will vehemently argue, you have to wonder why so many cyclists are still alive. In any case, the number of electric vehicles on the road is undoubtedly going to soar so we’re all going to have to learn to avoid crashing into things that we can see but not hear.

Zero cites a number of advantages that electric bikes offer over their petrol counterparts: there’s no engine or clutch oil to keep topped up, and no spark plugs or fuel and air filters to replace. The bikes should prove cost-effective when you take into account the cost of charging the battery vs buying petrol, and government incentives for buying and owning an electric vehicle.

But let’s be honest – unless you’re riding a ratty old commuting bike, you’re probably not on a motorbike to save cash; you’re riding for the thrill of it. And Zero’s electric motorbikes deliver big in thrills.

Zero Motorcycles is based in Santa Cruz, California, and has been building electric motorbikes since 2006. There are three main models in the current range – the Streetfighter, the Dual Sport and the Enduro – each coming in a choice of configurations. The full range is below.

Zero DSR Black Forest Edition: a DSR made for touring, with integrated luggage and an optional fast-charging ‘Charge Tank’. Price: £18,785 (not available in the US).

Zero XFS: a frankly harrowing supermoto which wants to go everywhere on one wheel. Lightweight and agile, the Zero rep on the trip simply described it as “a hammer”. Price: $$8,495 / £10,490.

Find out more about Zero bikes or book a test ride at Zero's website.