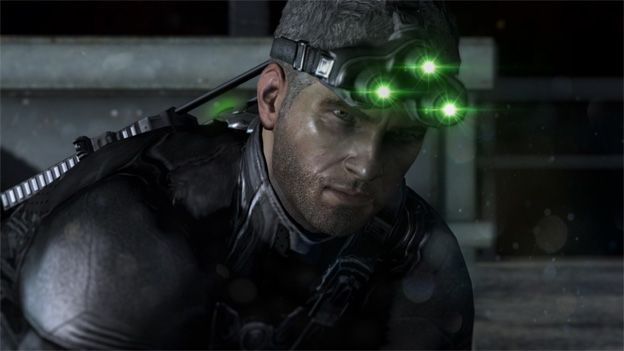 Splinter Cell: Blacklist is a solid and compelling entry in Ubisoft's stealth series, but it's bogged down by its need to satisfy too many disparate styles of play

Splinter Cell: Blacklist is the best entry in Ubisoft's stealth series since Splinter Cell: Chaos Theory was released back in 2005. While that may sound like unreserved praise, veterans of this series will know that it's a recommendation that comes with a couple of caveats.

Chaos Theory was – and still is – not only the best game in this franchise to date, it's also the last time players could take it for granted that Splinter Cell was a true-blue stealth game. That all changed with Conviction, which came front-loaded with high-octane action that moved at a frenetic pace.

Conviction was also the last time that the Splinter Cell's protagonist, the grizzled secret agent Sam Fisher, was voiced by Michael Ironside. He's been replaced in Blacklist by the younger Eric Johnson because the developers said they wanted an actor capable of full-body motion capture as well as voice acting.

To be fair, Johnson does a good job; even if his voice is reedier and lighter than Ironside's thundering baritone, he has Fisher's steely-eyed glare down cold.

In a scenario that sounds like the premise of a season of 24, Blacklist sees Fisher head up a team called Fourth Echelon who are on the trail of a terrorist group called The Engineers. They, for their part, have demanded that the USA remove all of its troops from foreign soil immediately.

If this doesn't happen, The Engineers will unleash The Blacklist, a series of escalating terror attacks designed to bring the USA to its knees. It falls to Sam and his team to thwart The Engineers and, naturally, this involves a lot of sneaking about in the dark and deploying an array of delightfully lethal (and non-lethal) gagdets.

In terms of how it plays, Blacklist is pitched somewhere between Chaos Theory and Conviction. The action here is split across three different styles of play: Ghost, Panther and Assault. Ghost describes the old school way of playing Splinter Cell where staying out of sight and gliding past enemies, leaving them blissfully unaware of your presence is the order of the day.

Assault is the direct approach where players eschew stealth, break out the hardware and engage in all out gun battles. Panther combines these two elements.

The intimation here is that players can pick the style that best suits them – a promise backed up by all the adverts that bear the legend: “Your Rules. Your Way”. This isn't the case at all, as it happens.

The single-player campaign contains moments – much as was the case in Conviction – where gunplay is pretty much unavoidable; one example involves Sam trying to escape a police station with a captive in tow and another occurs when Sam is betrayed inside the US embassy in Iran.

The side missions, which are split across the three (and later, four) members of Sam's team also impose styles of play, to a degree. For example, the missions offered by Grimmsdotter – Sam's chief aid – are open-ended maps with multiple objectives and no checkpoints.

Since being spotted in these missions results in instant failure, you can't exactly hurtle into them guns blazing. Similarly the missions offered by Charlie – the team hacker – are essentially Horde Mode style matches where the player (or players) have to repel increasing waves of enemies. Being a Ghost isn't exactly an option here.

All that having been said, when Blacklist doesn't try to impose its will on the player, it can be gloriously good fun. While the campaign is uneven in places and is rather criminally short, it contains moments of sheer brilliance; Sam's escape from Guantanamo Bay (for reasons too stupid to mention) is a fantastic piece of design if you're a fan of the series' stealth roots.

Similarly the collection of missions offered by Grimm and Kobin (the team's unwilling accomplice) are worth the price of admission alone, although if you tackle them in co-op, make sure you and your mate are on the same page. Friendships can end in this game.

The game's trump card is its superb multiplayer, which sees the return of Spies Vs Mercs, the game's two-on- two or four-on-four battles in the dark. Sides are split between heavily armed and heavily armoured Mercs and agile, gadget-packing Spies who also have the benefit of night vision.

Mercs are advised to sweep their torches into every darkened corner and what each other's backs, while Spies win out by keeping to the shadows and only attacking if they are certain of a kill. Most matches play out as tension-packed games of hide and seek, guaranteed to get pulses racing.

Splinter Cell: Blacklist feels like a game that's caught between too many disparate styles of play. In an attempt to satisfy both players who prefer action-packed gunplay and old- school stealth hounds, the developers have delivered a game walks a difficult line and occasionally trips over itself.

It feels weird to say it, given the very intense nature of its protagonist, but Splinter Cell: Blacklist feels unwieldy and unfocussed. That having been said, there's certainly enough here – especially in the multiplayer – to keep fans glued to their consoles long into the night.