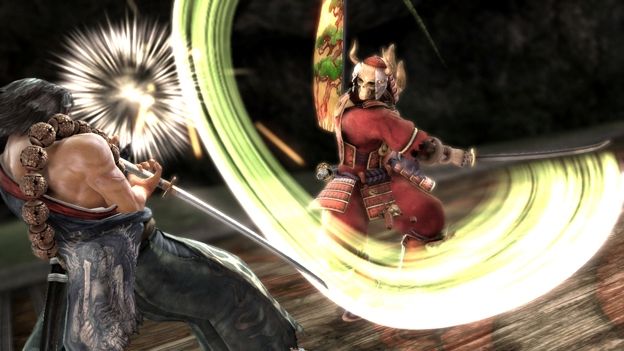 Soul Calibur 5 Review: Has Namco finally delivered -like the games of old -or is this old warrior of a gameabout to fall on its sword?

In more recent years however, the franchise has stagnated and even desperate (read: ridiculous) attempts to reinvigorate things - such as the inclusion of Star Wars favourites Yoda and Darth Vader in Soul Calibur 4 – have failed to stop the games feeling tired.

Popular opinion was that Soul Calibur 4 marked the grizzly end for a once proud warrior. Supposedly even Namco were considering dropping the series before Soul Calibur producer Katsuhiro Harada started a petition to convince the company's upper echelons that there was still life in the old dog. Harada got his wish, and Soul Calibur 5 is potentially the series' last chance at redemption.

Give Namco credit for listening to its fans. Japanese publishing and development houses traditionally have excellent public relations and often look to their fans for some creative direction.

Simultaneously, they no doubt saw what Capcom achieved with Street Fighter 4 and perhaps thought it could do something similar, or at the very least jump on Capcom's bandwagon. The influence of Street Fighter IV is felt all over this game, but particularly in the changes made to the gameplay.

Soul Calibur 5 still plays in a similar style to its predecessors and Namco beat-em-up brethren Tekken. Eight-way-run combat is the order of the day, with combos based around this and three types of attacks: horizontal, vertical, and kick. Many characters have as many as 16 different moves for each type of attack, so we're talking about an extensive move-list, not to mention the numerous attack strings and combos on top of that.

If you want to master a character, its going to take a lot of work. Even then, the move list has been simplified from the previous iterations, and it benefits the game as well as making things easier for newcomers.

As this is a game about fighting with sharp things, when you aren't attacking, you probably want to be blocking. Guarding is tough in Soul Calibur 5, as you have to guess whether your opponent is attacking high or low and block accordingly.

The pay-off is that many moves can be easily punished if they are blocked. If, like us, you're more used to Street Fighter, you might find it takes a while to remember that you can't block simply by holding back on your joystick...

The major difference in Soul Calibur 5 to previous versions is the addition of a Street Fighter-esque 'super meter'. You can build up to two levels of this meter, which is used for various special attacks ('brave edges' and 'critical finishes') as well as counters ('guard impacts').

For series veterans, this adds an interesting new dynamic to the game, while newcomers will appreciate that having a full meter means you always have a chance of getting back into a fight.

Namco seems to have a penchant for creating characters and then giving them an old character's moveset, and Soul Calibur 5 is no different. Granted, Soul Calibur has more of a story arc than many fighting games and the changes are largely for this reason, but story canon aside it would have been nice to see some more of the old guard playable in Soul Calibur 5.

That said, the new versions of characters such as Kilik, Xianghua and Taki are well balanced and are different enough to justify their presence.

Again, their movelists have been simplified somewhat but if you've played them in previous games, you'll find that they are much the same, save for a few tweaks.

Namco has allowed itself a degree of fan-service by bringing in Ezio Auditore da Firenze from Assassin's Creed as a playable character. There is always a danger that guest characters simply won't fit into the style of the game, We've already mentioned the disaster that was the inclusion of Yoda in Soul Calibur 4, but Ezio is well suited and accompanies the rest of the cast well.

In short, fans of the series may be disappointed to lose a few characters, but the new cast are well balanced and have enough new tricks to keep both newcomers and series vets interested.

Lets jump into the good stuff first. Soul Calibur 5 has the best character creation facility of any fighting game ever. That's not an overstatement, it really is excellent, and other than modelling your character's fighting style on one of the already-present cast, you have total freedom to make your blade-wielding battler look as crazy as you want.

Then, you can take him or her (or it) online to fight players around the world, either in ranked or player matches, or in the 'Global Colosseo' - effectively a giant player match where players can face off against each other.

And as for the experience, Namco has absolutely nailed this one.. Until now, fighting game online lobbies have been dark places, filled with bitterness and thoughts of revenge.

Soul Calibur 5's are brilliantly designed, allowing you to watch the current fight while text chatting with the rest of the lobby and checking out your opponents' records and statistics. So much so that you can easily miss your turn to fight if you aren't paying attention.

The single player modes are extensive, but at the same time they feel a little bit lacking. Arcade mode is very well done, giving you lots of options and a reasonable difficulty curve should you so wish. The story mode is not so good, and actually feels unnecessary to Arcade mode.

If you have no interest in playing as either of the two characters involved, and you aren't bothered about the filler artwork that preceeds and follows each battle (not a cutscene in sight, by the way) then there's really nothing to see here...

...except that you have to play through it if you want to unlock some of the new characters, stages and modes. Why, Namco, why? We're big boys and girls now, we don't need you to shepherd us through your maze of decidedly average single player modes.

By all means make some of the character creation items unlockables, maybe even the stages. But please, please stop making us unlock characters, it's just unnecessary. And then, as if you weren't frustrated enough, you get to unlock the Legendary Souls mode, which features the kind of filthy, cheating AI that will leave you sobbing in the bath (or in our case, sitting under a cold shower).

When Capcom brought Street Fighter back from the brink, the rest of the beat-em-up crew took notice. Namco followed suit, rolled the dice one last time, and in Soul Calibur 5 it has a game that could restore some of the faith that the franchise has lost after its last two outings.

Ignore the single player modes - Soul Calibur has always been about the multiplayer experience, whether it's playing with friends in your living room, or taking on players from around the world. This game delivers fully where it matters, and throws a great character creation mode into the bargain.