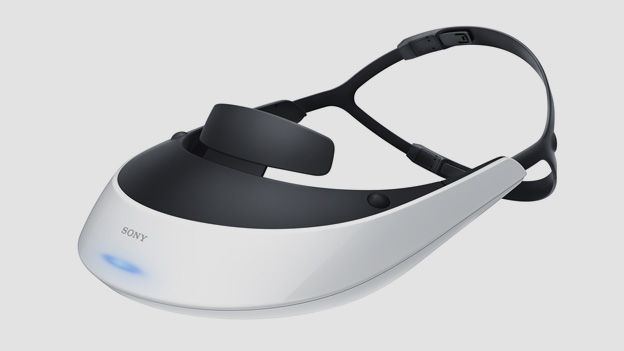 The Sony HMZ-T2 Personal 3D Viewer is the second iteration of what Sony had initially created as a 'concept' product. Designed as a way of looking into the future of home entertainment the device is Sony's answer to the awkward truth that 3D in the home still isn't perfect. One of its few competitors is the Carl Zeiss Cinemizer OLED.

Using two tiny OLED screens, the HMZ-T2 is able to create a 'perfect' 3D image without any of the eye-based confusion that can still take place using passive or active 3D technology. On top of that Sony believes it is more than capable of competing if not beating the huge 42-inch TVs you currently own such as the Sony KDL-55HX853 or the award-winning Samsung UE55ES8000.

These are claims that shouldn't be taken lightly, not only does the HMZ-T2 cost as much as a high-end TV, but it also limits viewing in that only one person can see the image. Of course, if that image happens to appear the size of an IMAX screen then things begin to make sense.

With an almost identical look and feel to the original Personal 3D Viewer the HMZ-T2 has clearly taken its design cues from the world of Tron looking about as futuristic as you can get. With a plastic body and rubber headband it's not too heavy either coming in at a reasonable 330g.

Where the HMZ-T2 fails is in how you actually wear it. Available with a series of rubber inserts that help to block outside light out, one wonders why these actually aren't a permanent fixture. Instead you have to individually pop each part of the 'blinkers' resulting in something that is less than stable adding to the overall feeling that perhaps you're still using a prototype.

All the controls are sensibly arranged along the bottom while the now interchangeable headphone jack has been bafflingly placed inside the eye cavities resulting in a tangle of wires before you've even turned it on.

Luckily though this is where any design complaints end, because it is surprisingly comfortable to wear and once you've got it completely set up we'd argue that it's more than capable of being worn for long periods of time without any strain.

This is where things get cheery. Setting up the HMZ-T2 was an absolute dream, as the Sony representative pointed out to us, "treat it like your normal everyday TV and you'll get on fine".

Taking this approach resulted in a completely painless setup. There's a box for HDMI input/output and power, the HMZ-T2 then uses a separate cable, which runs to the headset itself. The wire is more than long enough for pretty much any living room.

Because it's a single HDMI you can plug in almost any input from a Blu-ray player, your Sky HD box, Xbox 360 or Sony PS3 with the only downside being that it is just a single input so you will have to disconnect everytime you want to switch between formats.

Once connected, you simply turn them on, follow the surprisingly simple calibration steps on the screen and you're good to go.

The headsets features two small OLED displays each of which has a resolution of 1,280 x 720 pixels. Yes you read correctly, that's NOT Full-HD. Does it matter? The only way to answer that question is by breaking it into two parts; gaming and films.

Treat the HMZ-T2 as a gaming device and you'll be treated to a completely original gaming experience, well until the Oculus Rift is finally released. With both the Xbox 360 and the PS3 maxing out at 720p the images you see are not only huge (The T2 creates a virtual screen size of 750-inches) but also clear.

Fast response times along with the virtual 5,1 surround sound both contribute to create an immersive gaming experience that you simply won't find anywhere else. We spent a weekend playing Bioshock Infinite and felt a palpable sense of disappointment when we reverted back to a conventional TV.

Plug the HMZ-T2 into a 3D Blu ray player and it's hard to deny that you won't find a better 3D viewing experience short of going to the cinema. Granted it's a lonely experience, but it still needs to be seen to be believed.

Thanks to the large dual-screen setup, your eyes have no difficulty adjusting to the 3D image while a wide 45-degree viewing angle helps keen any blurriness down to a minimum.

Regular TV and 2D films are where things get a little tricker. Watching regular 2D films are where the chinks begin to show. Because the output is only 720p and the viewer has been designed for 3D viewing it immediately becomes clear that what you're seeing isn't the full Blu-ray experience. Instead fast moving images can become blurry and picture quality is noticeably reduced.

At £999 the HMZ-T2 is well and truly priced as an extravagance, despite being marketed as an update to an already well-established consumer product it's hard to shake off the feeling that this is still in some ways a prototype.

If you're looking for something that will function as an easy-to-use everyday device then we'd have to steer you away from the HMZ-T2. The rubber attachments are an annoying design flaw while the fact that it's not Full-HD is regrettable. Add to that a price tag that could make you weep and what you have is a brilliantly engineered, but still not fully practical piece of the future.

However, there are still plenty of postives. As a piece of technology the T2 is a testament to how far we've come with home entertainment and it's a reassuring sign of what we can hope to expect in the future.