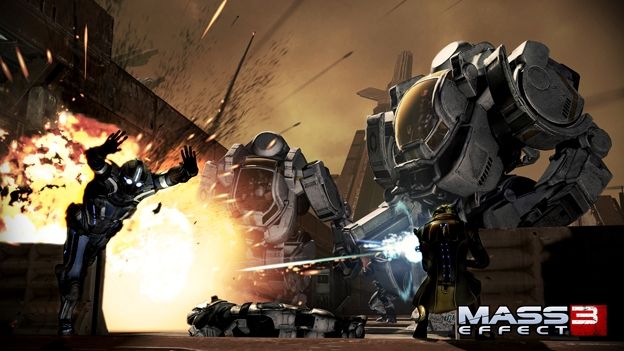 Mass Effect 3 Review: The final chapter to the Mass Effect trilogy has arrived... but does BioWare's intergalactic finale do the series justice?

For some reason that we struggle to put our finger on, games today have an obsession with trilogies. Maybe it's great for marketing, or it always seems to be a great canvas for a story arc - but to us it's an unnecessary boundary, and an obsession that often pushes great games, and wonderful stories too far.

Assassin's Creed: Revelations was a great example: a story that feels as though it has been stretched to fit across three titles, and the gaps exposed by this over-development were filled with features that just felt unnecessary (bomb-crafting and tower defence spring to mind immediately). We call this 'trilogy syndrome'.

Mass Effect is a different kind of beast - primarily a story of epic proportions and custom-made to fit into a trilogy of blockbuster titles, naturally following on from Mass Effect 2.

This is vitally important. The series is designed to be played as a series, the same way Lord of the Rings should be read (or watched). Jumping into Mass Effect 3 without having played the previous two games is like trying to watch The Wire from the middle of series 4 onwards: you just won't understand why it's so brilliant.

The question is: does Mass Effect 3 do the previous two games justice, and send out the series with a bang?

BioWare and EA have really worked hard on reinventing Mass Effect's combat system, and the introduction of close-quarters combat has completely changed the way that most of Mass Effect 3's battles pan out. Whereas older games tended to edge towards systematic, methodical taking down of targets, this game is far more frantic.

This is often down to the introduction of new types of enemies, and the much improved AI. Early confrontations with the human paramilitary group Cerberus will have you dealing with heavily-shielded 'Guardians' as well as assault troops and specialist 'Centurions'.

Suppressing fire from the latter two makes it tough for you to deal with your enemies and keeps you pinned down while the armoured troops advance on your position, meaning you always have to be moving, and thinking.

This makes close-quarters combat extremely necessary, and combining your squads powers is the key to relieving the pressure. Unlike the previous two games, battles are no longer glorified shooting galleries. If you don't use your powers well, and you aren't smart about your combat, you will die. A lot.

There is a palpable Gears of War 3 feel to the combat in this game, and there are good and bad sides to this. Unfortunately, the cover system isn't quite as good as that of Gears of War 3, but this is not a huge surprise. It took Epic two games to get that right, and it was a cornerstone of the whole franchise.

That said, the cover system is still miles better than it was in Mass Effect 2, and thank god, because in Mass Effect 3, if you're out in the open you're normally a few seconds from being swiss cheese.

Like the earlier Gears of War games, Mass Effect struggles to integrate the cover system with spontaneous battles. An open area scattered with waist high walls, large rocks and cargo boxes almost always let you know that a battle is forthcoming, and even if your squadmates act surprised, we know they're just pretending.

With the addition of turret sections, and little arrows that show you when to climb, jump and hurdle obstacles, the action feels at times as though it's not really within your control, and worlds can feel more like well disguised corridors - a shame for a series that has always been about building the story around your choices.

When the battle does inevitably arrive, it is still immensely satisfying, especially given the increased difficulty of this game. Even playing on normal was tricky early-on, and the game really forces you to be smart about when you're doing. We should emphasise that the combat in this game really is fun and challenging, and the minor issues that we had whilst playing don't take away from this.

Cut scene animations can be little on the wooden side, a problem we don't remember seeing with Mass Effect 2. This is a superficial detail, but when the story is so paramount to the experience and the cut scenes make up such a large portion of the game, it can be a little distracting.

This may seem like a collection of bad points, but these are mostly minor details that don't really take away from the overall enjoyability of the game. Conversations are still wide-ranging and insightful, shooting things still feels meaty and satisfying and exploring the galaxy is still as engaging a time-sink as it ever was.

In the interests of not ruining any of the story, we'll just say this: expect to see plenty of the cast from the previous games, as well as some new ones.

Although many of your old buddies make an appearance, it can be anything from becoming part of your regular squad to simply a passing conversation. It is this attention to detail that brings Mass Effect's world to life in a way that other fantastic games have struggled to do.

BioWare has tried to acclimatise new players to the sheer scale of the Mass Effect universe by introducing James Vega - essentially a replacement for the paint-strippingly dull Jacob Taylor in Mass Effect 2.

Being new to the story himself, his presence often encourages the recapping of previous events, giving first-time players a window into the events of the previous games. It is unfortunate then, that he is straight out of the hoorah-ing, gung-ho space marine textbook.

The beauty of the game is really held in the returning characters, and the humourous pokes at previous games will be lost on new players, thus removing much of the enjoyment.

The game kicks off in spectacular fashion with Shepard back on Earth and... lets just say things get pretty hairy very quickly. Given that Shepard has spent the last two games annoying a giant race of universe-cleansing lifeforms known as the 'Reapers', it's no surprise that they've decided to retaliate.

With the universe already in tatters, and Earth now under attack, Shepard is reinstated into the Alliance military with the task of pulling together the remnants of Alliance space, many of which he's also managed to alienate (pun fully intended) over the last two games.

Enemy forces are closing in on the homes of many of the universe's inhabitants, thus making the main game quite a tense affair. While travelling between objectives you will need to scan for assets while avoiding the watchful eyes of the Reapers, who will come to get you if they pick up your scans. If they catch you, it's an automatic game over.

Your task is to collect war assets, which gradually increase your overall strength for a final showdown with the Reapers. What effect your strength has on the final battle is impossible to say without multiple playthroughs, but the idea ties the whole game together and gives you a reason to keep searching for hidden assets and completing lesser tasks.

As for the basics, the menu system is almost identical to that of Mass Effect 2. Hitting start will bring up a radial menu that is simple and effective. It's refreshing that BioWare saw no need to change many of the basic parts of the original games that made them so easy to play. After all, change for change's sake is another classic symptom of trilogy syndrome.

Speaking of changes though, Mass Effect 3 introduces an online multiplayer element to the series. Up to four players can team up to complete co-operative missions against the Reapers. Once again, trilogy syndrome fears rose inside us, but it is clear that a lot of thought and effort has gone into this co-op mode.

Players can choose to play as any of the primary alien races featured through-out the main single player story, and your online character levels up in the same manner. Levelling unlocks new customisation options, characters, weapons and upgrades.

Once you've fully levelled your online character, you can make them into a war asset, a neat way of tying the online multiplayer in with the single player portion of the game.

Also, a cursory note on the Kinect features: one can't help but wonder how much the inclusion of Kinect compatability was a decision made by Microsoft, rather than BioWare. It doesn't seem an obvious fit, and though the idea is actually good in practice, it's still a little difficult to use in the thick of battle and it just doesn't come naturally.

The dialogue recognition is fine (although not really necessary), but the combat orders don't always work, which is a shame. When the action is so frantic, we much prefer the option of pausing with the radial menu and deciding our best tactical options from there.

In it's own right, Mass Effect 3 is a well-made, entertaining RPG. It has a few faults, but makes up for them with the solid mechanics and attention to detail that we've come to expect from BioWare. It is nothing more than that, and it isn't a truly fantastic game in the same way Mass Effect 2 was.

But in a way, that is absolutely the point. We don't believe that Mass Effect 3 was designed to be played alone, no matter what the developers and publishers have been saying. When you stand it up as part of a trilogy, it becomes an integral part of one of the finest gaming experiences ever made.

Mass Effect 3 is just the end of this space opera - but it's a cataclysmic crescendo to a story that has been your own from the very beginning. Every battle you've won and lost, every decision you've made over the last two games is its own thread, woven into an emotionally-engaging, intergalactic tapestry. Like the first time you walk into Hyrule Field, Mass Effect as a whole is an experience that will live with you for a very long time.

One word of advice, if you haven't already got the message: play the whole thing. From the very beginning.

You can thank us later.