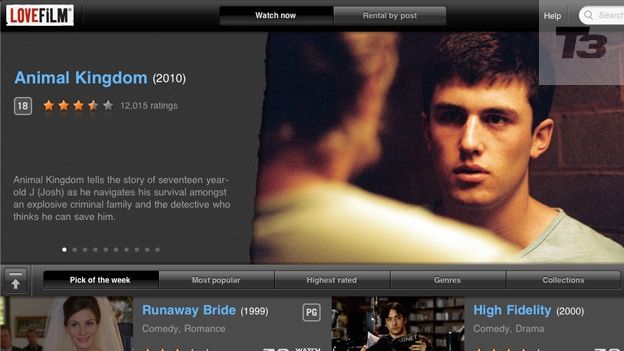 Lovefilm Instant offers unlimited online streaming for just £4.99 a month, but with the arrival of Netflix, does it still come out on top?

DVDs are slowly but surely heading in the direction of the tech graveyard currently filled with video cassettes and the VCRs that used to chew them up on a regular basis. These days you can live a disc-free existence and Lovefilm Instant has been helping to make this a reality in the UK with its online streaming service that allows you to watch movies and TV shows from a range of devices including Smart TVs and the Apple iPad 2.

US favourite Netflix has been doing something similar across the pond and now it's arrived in the UK to try and steal Lovefilm's crown. We spent some time with Lovefilm Instant to see who's likely to win the Netflix vs Lovefilm battle.

Lovefilm already boasts a disc rental service, but you can additionally opt for the Instant service which offers up a 6,000-strong library of films and TV shows that can be streamed for a monthly fee of £4.99, which is £1 cheaper than Netflix's monthly service.

You can expect Lovefilm Instant to sap around 2Mbps of bandwidth from your broadband connection and having tested it on a laptop, Apple iPad and both Xbox 360 and PS3 consoles it was generally a buffer-free viewing experience on all fronts.

If you're expecting to see the Dark Knight in all its glorious HD glory, you'll have to grab it on Blu-ray as Lovefilm Instant only delivers Standard Definition (SD) streaming quality.

While the lack of HD may not so be noticeable whilst watching on the iPad 2 or on a laptop, once you've decided to move your movie streaming onto a TV, the lack of a high-def picture begins to show. Re-creating that cinematic experience in your living room is also dealt a blow by the fact that there is no surround sound support either.

Lovefilm first launched its online streaming service three years ago and continues to add new platforms with the iPad and the Xbox 360 the latest additions alongside smart TVs, Mac, PC and the Sony PS3. Disappointingly there is no support for Android devices as yet, but we wouldn't be surprised if this in the works.

Despite its appearance on numerous devices, there is no syncing between them which means you can't watch a film on one device and then resume the action on another. The user interface is not consistent across platforms either which can be slightly irritating when trying to find your way around the service.

We found the Xbox 360 version was the most impressive in terms of its integration into the new dashboard and while support for Xbox 360 Kinect was also very responsive. At the other end of the spectrum, the PS3 version felt clunky at best and far from user friendly.

So what can you watch? Well quite impressively, Lovefilm Instant offers 6,000 titles (of which 4,000 are films) which includes content from movie studios such as Sony and Warner Bros.

On the TV content front, Lovefilm has also secured deals with the likes of ITV, BBC Worldwide and US channel ABC. So you can expect mainstream movies like the Dark Knight, The Hangover and The Social Network but there are also plenty of titles that didn't exactly set the box office alight (Scooby Doo 2 anyone?).

If you're a big US drama fan, there are entire box sets of Lost and Desperate Housewives and for Brit fans, Doctor Who and Prime Suspect. The British TV offerings don't seem that impressive though when you compare it to the depth of content you can get on free VOD services like BBC iPlayer and 4OD however.

For newer films, there is also a PPV (Pay Per View) option which also allows users to stream movies like the Green Lantern and Horrible Bosses for £3.50 and older titles such as Rain Man and The Shining for £2.50. This option however is only available to PC and Mac users.

There's plenty of information to help you decide whether you should spend the next two and a half hours watching District 9, with user and critic reviews as well as ratings listed, and for console versions, a cast list links up actors and actresses to other movies available on the service making it easy to watch all the Liam Neeson films possible on the service.

Crucially, the search works well and is able to find a director or actor you are looking for. You will however be disappointed when you see how many films seem to be missing that all important that clickable Watch It Now icon.

This 'Like' will also make you a fan of the movie Facebook page. While you can Like a film on the desktop version on your computer as you would do with a news story or blog post, there's no such option on the iPad app, unlike Netflix, which offers pretty much the same experience across platforms.

Lovefilm was on the UK scene long before Netflix and has the substantial film selection to begin to justify spending £4.99 a month. The problem is that the large proportion of Lovefilm's extensive catalogue is still mostly available via disc rentals or PPV which means paying extra on top of that monthly fee to watch the latest releases.

There 's also the lack of HD streaming and Dolby surround sound while the missing Android support was similarly disappointing. We would have also hoped for a better Facebook and cross-device integration. The launch of Netflix could be the wake-up call that Lovefilm needs to ensure that it's not knocked off its streaming perch.

Check out our Netflix vs Lovefilm video: