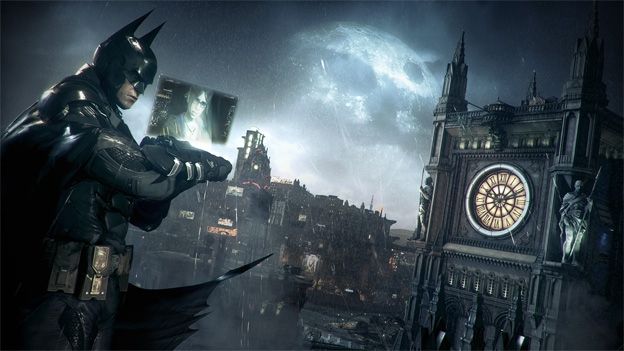 Batman: Arkham Knight is the third instalment in Rocksteady's Arkham series and it has two incredibly tough acts to follow. Its predecessors, Batman: Arkham Asylum and Batman: Arkham City were not only critically acclaimed mega-selling blockbusters, they're widely considered to be two of the greatest games ever released on the last generation of consoles.

They were the games that revitalised the Dark Knight's fortunes in video games after a slew of mediocre titles, and their mechanics that moved from combat to stealth to puzzle solving seamlessly, pretty much broke the back of the stealth genre as easily as Bane broke Batman in Knightfall. It's largely down to these games that the likes of Splinter Cell, Hitman and Thief had to re-think their stances on pure stealth.

So Batman: Arkham Knight has to do a lot to impress, and while it's able to use the mechanics, visual style and gameplay that made its predecessors such a hit, it has to bring something new to the table. The first and immediate feature it adds is the Batmobile.

Rocksteady's imagining of Batman's set of wheels is that it's an extension of the Dark Knight. To wit, it's always on call – players can summon it at any time – it can pretty much travel anywhere – crashing through barricades and brick walls – and players can use it to launch Batman into the air, either up to the rooftops in a glide, or into the face of any enemies in their vicinity.

The E3 demo revealed that the Batmobile can also switch between its 'car' mode and its 'tank' mode. 'Tank' mode allows better precision in the vehicle's movement and it also gives players a Vulcan Cannon and a set of missiles, which players can use to reduce enemy cars to scrap metal. On top of that, 'Tank' mode has a powerful winch that allows the Batmobile to pull down thick walls and pull up parts of the road to create a ramp.

As was mentioned, Batman: Arkham Knight keeps a lot that worked from the previous games. Detective Vision, which coats the screen in grey, highlighting targets and points of interest is back, as is the free-flowing combat, the Predator rooms and the ability to glide through the air. Most of these mechanics have been augmented in some way, however. Batman can now use parts of his environment to take down enemies in combat, he can knock out three enemies from a floor grate (instead of just the one) in Predator mode and he's able to cover more distance with a glide.

These augments are required due to the fact that Batman has a ton of new enemies to fight and a much larger environment to traverse. In the demo we were introduced to the combat specialist foe, a martial arts expert wielding a katana, who attempts to flummox players by automatically dodging an attack and then immediately launching a counter. Players who master combat in the Arkham games do so through learning the rhythm of each enemy, and the combat specialist looks like it may through veterans a few curveballs.

The sheer scale of the map has also necessitated a tweak in the gliding mechanic. Players can now glide for longer and cover far more distance than they could in either of Arkham Knight's predecessors. Players now have a massive sandbox in the form of Gotham City's quarantine zone to move about in. Gliding and using Batman's BatClaw are two options and naturally, the Batmobile is the third.

The reason Batman is in the quarantine zone is because The Scarecrow has planted a Fear Toxin bomb somewhere in Gotham. Once inside, Batman learns that if detonated, the bomb would expel a cloud big enough to cover the entire eastern seaboard. Seeing as how Scarecrow has always been more interested in seeing the effects of his fear gas on people than… well, anything the authorities could offer him, Batman has to track him down quick.

More pressingly, however, he has to deal with a brand new villain called the Arkham Knight. Nothing much is known about this character, but he seems to have Batman's number. Not only did we learn from snippets of conversation that he has a personal axe to grind with Batman, but he seems to know more about him than your average nutter like Two Face or Harley Quinn – as evidenced by him telling his armed thugs which parts of Batman's armour to aim their guns at.

Batman Arkham Knight looks every bit the part of another smash hit for Rocksteady. It's built on solid foundations, boasts a ton of new and fun mechanical content and visually speaking, it's something of a sumptuous feast. It's true that the wheels could come off before its release, but if Rocksteady's track record is anything to go by, we're betting that it'll be a brilliant game and a fitting end to the trilogy which began with Batman: Arkham Asylum.