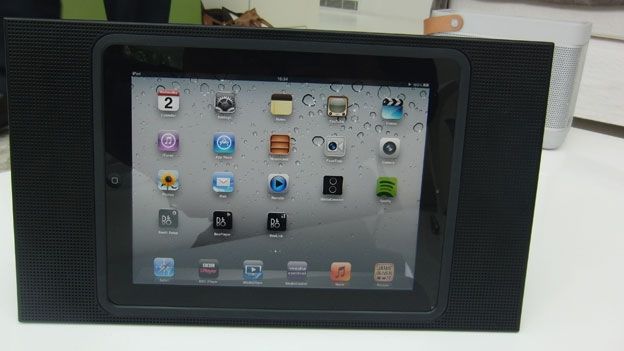 Unlike current iPad speaker offerings on the market like the Philips Fidelio DS9000 and the JBL OnBeat, the B&O BeoPlay A3 sound system tucks the Apple tablet away inside its body while it amplifies the audio from your music, films, video and FaceTime video chats.

Falling under B&O's new 'affordable' Play range, it is certainly a stylish-looking number, but it also delivers a pretty impressive sound performance.

Set to be available in black (with a white colour scheme to follow later), the wedge shaped speaker is made from an aluminium frame that weighs in at just 1.5kg which does give it a considerable weight once you've dropped in your iPad.

The unique design means that you can stand the device up in both landscape and portrait modes and rest it on your lap which should make it ideal for scrolling through your playlists and browsing the web. A latch at the back of the device allows you to pop the iPad in and out when you need to take it on your travels.

Buttons on the BeoPlay A3 are kept to a minimum with volume control and standby buttons positioned on the thinnest edge of the device which B&O claims make it easy to access whether you are using it in either landscape or portrait modes.

The key spec is B&O's Adaptive Stereo Orientation which is essentially a motion sensor that knows when the device is in landscape and portrait mode, and adjusts the audio performance appropriately to deliver a consistent audio performance.

Creating the loud, bassy sound is an omnidirectional two-inch woofer and half-inch tweeters positioned in the corners of the device which delivers the rich audio down to 60HZ.

In terms of battery life, you can expect around 5 hours of playtime before it needs charging, while it will also power up your iPad when plugged into the mains.

The BeoPlay A3 is certainly a beautifully crafted approach to liberating the audio from your Apple tablet and has the audio performance to match, but it comes at some cost. The BeoPlay A3 costs £449 which actually makes it more expensive than an iPad.

The bad news is that it is not compatible with the new iPad just yet (only the iPad 2), but it is something that B&O are working on adding, so it's on the way. It sounds amazing as you would expect from a B&O product and has a great stylish edge over its competitors, but you are going to have spend big to have one lying around in your house.