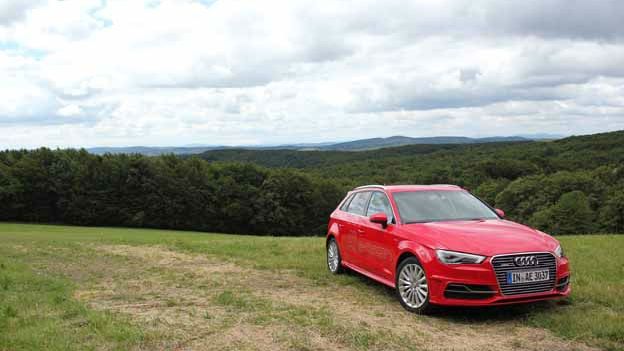 Audi's e-tron technology is the German company's move into the hybrid space. And, after concepts that included the Tony Stark-driven Audi R8 e-tron, T3.com has been itching to get behind the wheel and test it out.

The A3 Sportback e-tron is the first production plug-in hybrid car from the Audi garage. First revealed at the Geneva Motor Show earlier this year, it's setting the scene for a fleet of Audi e-tron vehicles coming in 2015 and 2016.

Up against some pretty tough competition, including the likes of Toyota's formidable Prius or the BMW i3, Audi is betting big on the A3 Sportback e-tron. The firm has sunk plenty of tech into the car, pairing the hatch's 1.4-litre engine with a 74 kW electric motor. And there's a dedicated smartphone app to help you keep track of things like fuel economy and air conditioning.

Available to order from the end of this month, the A3 Sportback e-tron is still an Audi, so it doesn't come in cheap. But do you get your money's worth? T3.com took it for a spin around Vienna to find out how it handles.

In terms of looks, the five-seater, five-door hybrid hatchback is no different from its petrol-only twin. But if you're looking to boost your green credentials then the added 75kW electric motor will give you an electric-only range of 50km a top electric-only speed of 80.8mph. Switch over to the hybrid mode and the petrol engine will up the top speed to 137.9mph.

Audi's hybrid management system has been programmed to control the two engines for the most efficient driving experience. So if you need to hit the gas it'll work both engines together while the regenerative braking helps to feed kinetic energy back into the battery. Meanwhile, CO2 emissions sit at a very comfortable 35g/km.

Of course, that electric motor still needs charging and Audi says you'll be looking at a charge-time of 2 hours 15 minutes if you're using an industrial charging port. If you're using a residential socket then the time ups to 3 hours 45 minutes from empty to full. Considering the relative scarcity of industrial charging ports in the UK at the moment, this is a pretty legitimate purchasing concern at the moment.

There is, however, a mode that'll replenish the battery from the fuel tank as you're going but you can expect your fuel economy to take a hit. The charge mode, along with three other options (Electric Drive, Hybrid Auto and the battery-retaining Hybrid Hold) is accessible via a switch on the A3 e-tron's dashboard.

Audi knows you've got a smartphone and has developed an e-tron app for the purposes of using it to check various things about your car on an Android or iOS handset. You can, as you'd expect check on charge status as well as electric range and the car's actual location. You can also remotely control charging (setting a timer to charge the battery at certain times) air conditioning and the auxiliary heater (an optional extra).

We were supplied with an iPhone running the app as part of our test drive and can confirm that all these functions are present and correct. The app itself doesn't feel particularly smooth though and certainly isn't much to look at.

The 7-inch satellite navigation screen glides up from a slot on the dashboard and is your gateway to the controls of the Audi A3 Sportback e-tron. Your main form of interaction with it is a dial on the control panel between the driver and passenger seat. Said dial is large, flat thanks to the touchpad on top that lets you trace lettering across it when entering words or skim around the map during navigation with your fingertip. It takes some getting used to but quickly becomes a much better way of entering text than clicking left or right through the alphabet.

As you would expect, Audi is offering plenty of modular upgrades to those with deep pockets. You can kit the A3 Sportback e-tron out with a Bang & Olufsen sound system, WLAN hotspot option and a park-assist system that uses the front and back mounted cameras to automatically steer the car into suitable spaces.

Sliding into the leather seats behind the three-spoke steering wheel isn't exactly an uncomfortable experience and the rest of the A3 Sportback interior isn't a bad place to spend a few hours at a time.

Large, circular air vents interrupt the faux-leather look and silver e-tron logos gleam up at you from around the interior. It's all black and silver – there are no varnished wooden inlays here – and the result is to make the A3 e-tron feel like a very modern motor. Like it's older petrol A3 cousin, there's plenty of boot space and reasonable leg room for those riding behind.

The instrument dial is handily illuminated for you and battery charge and petrol are both represented by 8 bars of light that gradually decrease. Just like your smartphone. These bar displays curve upwards along the bottom of your speedometer and rev counter.

Due to the electric motor and ample padding, we found the Audi A3 Sportback e-tron a pleasingly quiet place to be, even when cruising down Vienna's main streets during rush hour. Going at 55km/hour we could hear every chord progression from the German rock track playing over the radio and out of our non-B&O speakers.

Getting out into the countryside, and changing up to the petrol engine yielded some changes as the car became instantly more urgent and responsive to our nudges of the gas. Feeling less like a large silent go-kart and more like a car, we were impressed with the turning circle on some particularly bendy Austrian roads.

All-in-all, the Audi A3 Sportback e-tron gave us a very comfortable and responsive ride. Our worry that the braking was a little clunky appeared to just be our heavy foot and tendency to adopt British driving principles on much calmer European streets.

Is the Audi A3 Sportback e-tron one of the best hybrids we've seen? Indeed it is – giving you enough options to play with but at the same time offering a one-size-fits-all intelligent system that will save you pennies on fuel and limit environmental impact.

Audi has also decided to go the understate route as, apart from a couple of neatly-placed logos, the A3 Sportback e-tron looks like any other petrol-only motor. If you're investigating a hybrid car with out any of the ostentatiousness attached, this could be well worth a look.

The question on whether you should actually buy one is a touch harder to answer. For starters, it's not cheap and secondly, the electric infrastructure in the UK currently isn't good enough. The reality is that while hybrids and electrics are probably the future of driving, that future isn't here yet.

But we shouldn't take anything away from the fact that Audi has adapted the A3 into a very impressive hybrid hatchback. And while we wait for the chance to drive Iron Man's e-tron R8, the Audi A3 Sportback e-tron will certainly do the trick.