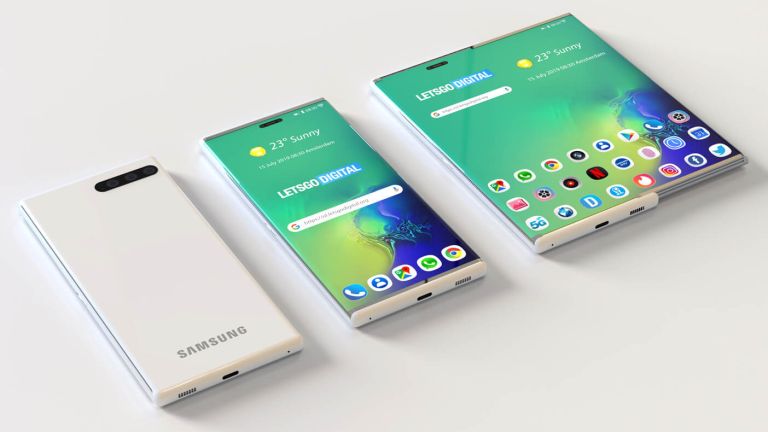 Samsung wants to stay ahead of the competition with the design of its flagship smartphones. First up, the Seoul-based company will unveil its Galaxy Note 10 early next month with a triple-camera design, curved edge-to-edge Infinity-O display, and a next-generation S Pen stylus.

Looking to next year, Samsung is widely-rumoured to launch a successor to its Galaxy Fold, as well as a follow-up to the Samsung Galaxy S10 series. It's unclear what the company has planned just yet, but an intriguing new patent might have revealed an early look at the all-new design.

The team at technology blog LetsGoDigital have unearthed a new patent filed with the Korean Intellectual Property Office, or KIPO. It describes a smartphone with an expandable and retractable display.

The screen can be slowly pulled from the right hand-side of the handset to extend the OLED by up to 50%. Unfortunately, the patent, which was published on June 24 2019, does not specify how this is achieved.

The Samsung Galaxy Fold proves that Samsung is capable of producing flexible screens, albeit not always with a durable design. However, it's not clear whether this patented design will leverage a foldable screen, or something new.

According to LetsGoDigital, we could see this ambitious new retractable design as an addition to the Galaxy S11 range – like the Galaxy S10 5G and Galaxy S10e, which were added to the line-up this year. It suggests the name Galaxy S11 Max.

Of course, it's possible the phone could be sold under the Galaxy Fold brand name instead. Although it uses a different mechanism it scratches the same itch by providing two very different screen sizes in a single device, with the ability to quickly switch between the two depending on how you want to use the handset.

As always, multi-national companies like Samsung patent a slew of different technologies and designs – not all of these leave the R&D department in finalised products. It's possible we'll never see this one on shelves worldwide.