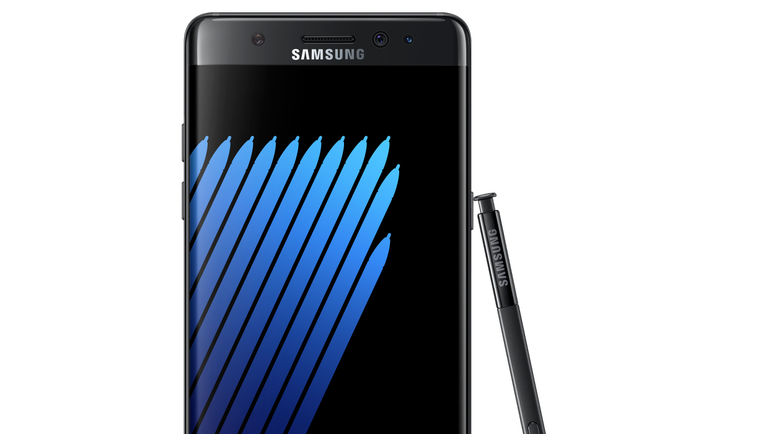 The new Samsung Galaxy Note 7 is here. A new phablet to sit at the top of Samsung's range, the Note 7 is the successor to the Note 5. Yes, there really is and was no Note 6. Now, in the same year we have the Galaxy S7 we also have the sleek Galaxy Note 7 which is, more than ever, for people who want to get stuff done.

There's also a new version of the Gear VR - Gear VR 2 seen here. Looks a lot like the old one, huh? (But the old one isn't compatible with the Note 7 you see).

Here are 10 killer features of the new Galaxy Note 7.

The 3,840 x 1,920 resolution Quad HD Super AMOLED display packs a super 518 pixels per inch and, as with other Samsung displays looks absolute pin-sharp. The Note 7 is the first phone with the capability to playback HDR streaming video on board. The display is protected behind Corning's Gorilla Glass5.

Galaxy Note 7 features a Samsung-built Exynos 8890 processor (or a Qualcomm Snapdragon 820 in the US and China) so the handset will be able to handle anything you want to throw at it – the graphics processing capability is apparently 58 percent more powerful. There's also 4GB of memory and 64GB of storage, so pretty much industry-topping specs there. There's a micro SD card slot supporting cards up to 256GB.

The Galaxy S7's camera got a lot of decent reviews and we're hopeful the Galaxy Note 7 camera can get close to this as it is, essentially, the same unit with 12MP, optical image stabilization and an f/1.7 aperture to let in plenty of light for those dark shots. On the front, there's a 5MP camera with an f/2.2 aperture.

The S Pen is a stylus. There's no getting away from it. But it is very cool. It can convert handwriting to text, access shortcuts and write memos – you can even pin one to the always-on display that we first saw with the Galaxy S7. You can even now create and share GIF animations with Smart Select., letting owners zoom in on the screen or convert languages by hovering above the text with the S Pen. It is even easier to access the best of the S Pen's creative abilities with Samsung Notes, a new unified app allowing users to jot down handwritten notes, draw, or edit memos from one location.

The tip has been narrowed from 1.6 to 0.7mm so it's more like writing with a pen. You can even use it to mix colours on screen so you can more easily paint or sketch with it.

Note 5 didn't come to Europe or the UK. “We disappointed our Note fans, 10,000 people signed a petition”. The Note 7 will be out in the UK and will be able to pre-order on networks including Vodafone, Three, EE and O2 from 16 August, with the Samsung Galaxy Note 7 release date set for 2 September (during IFA 2016 and a few days before the iPhone 7 launch). Black Onyx and Silver Titanium are retained in the line-up of colours, while there's now Blue Coral.

According to Samsung, if you pre-order before 30thAugust, you'll get a special early delivery three days before the device is in store. A free Galaxy new Gear VR will also be included in some pre-order deals.

Samsung has refined the interface so it's easier to use, especially with one hand. There's a new translate feature so you'll never be lost abroad again plus magnify (both within AirCommand, so you can hover above a word with the S Pen to translate), while there's a Smart Switch app for moving phones and Samsung Cloud (with 15GB of free space for all). Samsung Notes is a new unified app enabling you to jot down handwritten notes, draw, or edit memos all in one place.

The S7 is waterproof, so why not the Note? Well, with the Note 7 it wasn't just the device that Samsung needed to protect, it was the S Pen, too. This is the first Note which is IP68 rated, and yes that includes the S Pen.

We've already seen a long line of impressive phones and tablets launched this year from the major names, but there's a lot of life left in 2016 yet - and one of the biggest devices still to come ("biggest" in every sense of the word) is the Samsung Galaxy Note 7. And it is coming your way VERY soon!

Last year's Note 5 was an impressive bit of kit but never properly made it to the UK.

With the Note 7, that will be changing.

Yes, note there will be no Galaxy Note 6. That's so it doesn't seem old compared to the excellent Galaxy S7 and Galaxy S7 Edge that were unveiled earlier this year. It seems the Note will now step up to the same number. Of course, there's also the small matter of the iPhone 7, too, that it doesn't want to be seen as old in comparison to.

It's actually the seventh Note handset anyway, as there was a Note Edge a couple of years back.

We've finally got a launch date for the Galaxy Note 7 and it's earlier than expected, with the event taking place tomorrow August 2 at 11am EDT, that's 4pm BST, 5pm CEST. There will be events in London and New York and we'll be present to bring you the latest.

The actual Note 7 release date is strongly rumoured to be Tuesday 16 August, although of course we will know more tomorrow.

If you're new to the Note, it's the phablet version of the Galaxy phones Samsung launches each year. The original Note launched in 2011 with what was then a massive 5.3-inch screen - of course, that's now par for the course as far as mobile screen sizes go.

Every year since then Samsung has released a Note (or two). In 2014, Samsung launched both a regular Note 4 (which had now grown to accommodate a 5.7-inch display) and a Galaxy Note Edge, introducing the curved display tech we're now so familiar with.

The Note 4 came packed with upgrades and the Note 5 built on that success - the 2015 edition was a powerhouse of a phablet to own, as long as it was on sale in your part of the world. The screen remained at 5.7 inches last year, though that may change in 2016.

The Note phablets are also noticeable for coming with a stylus, having originally been pitched as business and productivity devices. With many phones now as big as the Note, the included stylus remains one way that the Note series can keep itself distinctive.

Every Note takes some of its cues from the Galaxy flagship phone released earlier the same year, and that's likely to be no different this time around. Interestingly, the S7 Edge display increased to 5.5 inches, which is almost as big as last year's Note 5.

Does that mean the Note 7 is going to get a screen size upgrade? It would certainly help differentiate it further. The two flagship phones also added microSD slots and water resistance to the mix, cues which the next Galaxy Note may or may not borrow from.

There's no doubt that the S7 and the S7 Edge have been big successes for Samsung, but it's going to want to make sure the Note 7 remains distinctive, besides just adding a stylus - both sets of devices have wireless charging, fingerprint sensors and many other features.

Samsung will want to build on the winning qualities of its 2016 flagship phones without hurting their sales,which is a difficult balance to strike. There's certainly likely to be some pent-up demand in Europe, where the Note 5 was never officially released.

There's been plenty of gossip, speculation and good old-fashioned leaking going on as far as the Note 7 is concerned and at this stage we've got a pretty good idea of what to expect. Reliable tipster Evan Blass (@evleaks) says the device will launch in the US on 15 August- which would fit in with the early August launch date.

Blass has also posted some images of the new Note as well - here you can see the handset in Black Onyx, Silver Titanium and Blue Coral.

It's going to have an impressive set of specs when it arrives too: sources in China say the phablet is going to come with the option of 256GB of internal storage space. That's on a par with some laptops and should give you plenty of room for your Spotify playlists.

The same sources say we can look forward to a mammoth 5.8-inch screen - that may seem like overkill but remember that the Note has always led the way in terms of7 large screen sizes and has always been very popular. Plus, the Nexus 6 had a 5.96-inch screen.

Apparently the camera is going to be worth waiting for, with improved optics that will eventually make their way into the Samsung Galaxy S8 too. It would outclass even the excellent Samsung S7 and S7 Edge in terms of image quality and low-light performance.

Now a video has also surfaced of the Note 7 in action:

Other Note 7 rumors and leaks

Did we mention specs? Some sources are tipping the Note 7 to have 6GB or even 8GB of RAM, while there's also talk of a 4,000mAh battery in the device (that would be particularly impressive considering the one installed inside the Note 5 had a capacity of 3,000mAh).

We also now know that the Note 7 will be the first Samsung handset to come with a USB-C port after after the disappointment of the Galaxy S7 not having the new tech that we've seen successfully implemented in other handsets such as the excellent Nexus 6P.

Other rumours are pointing towards a waterproof chassis - which would make sense considering the same feature is on the Galaxy S7 and S7 Edge - and potentially an iris scanner that will unlock your phone by scanning your eyeball, Minority Report-style. That would be awesome! The event invitation graphic you can see above also hints at this being a part of the new handset (check out this GIF).

That's a lot to take in and it looks like the Note 7 is going to be a device worth waiting for - expect an appropriately hefty price to go along with it.