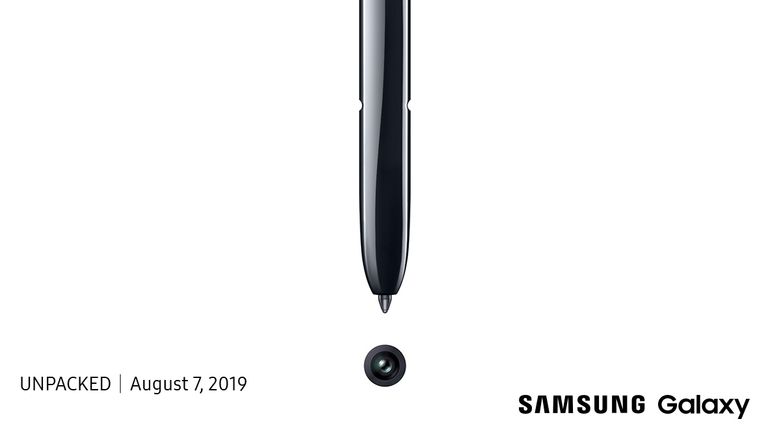 Samsung will hold its next Galaxy Unpacked media event on Sunday August 7 in New York City. The feverishly-anticipated event will see the South Korean company announce a swathe of new products, including the Galaxy Note 10 series.

The announce was accompanied with a teaser image that shows the trademark S-Pen stylus that characterises the productivity-focused Galaxy Note range – erasing any doubt about what we'll see at this launch event.

In a short clip, the S Pen (notably no longer the vibrant yellow colour seen on the Galaxy Note 9) draws a small circle, which becomes a camera lens. Since the Note 9 introduced a multi-camera system on the back of the handset, it seems very likely this is hinting about an innovation for the front-facing camera. Previous whispers suggest the selfie camera will be embedded inside the display, like the Galaxy S10.

The latest launch date is a little earlier than previous years. For example, Samsung announced the Note 9 on August 9 at its Galaxy Unpacked event, before rolling-out the handset to shelves worldwide in late August, depending on region.

Ahead of the Galaxy Unpacked reveal, there has been a barrage of leaks around the Samsung Galaxy Note 10 – from the tweaked Infinity-O display design, the demise of the 3.5mm audio port, the zoom capability of the new camera, and the price.

Samsung is widely-expected to shake things up with the Galaxy Note 10 series, introducing two new models of the flagship phone for the first time. Like the Galaxy S10e, one of the new variants will be a more affordable twist on the Note 10 with a slightly smaller display. Meanwhile, the Note 10 Pro will have a humongous 6.7-inch AMOLED and a quadruple-camera system. Both Note 10 and Note 10 Pro will ship in 4G and 5G flavours. As you'd expect from a flagship handset from Samsung, every variant will be powered by either the Qualcomm Snapdragon 855 chipset or Exynos 9820, depending on the market. Improved S-Pen stylus features are also expected.