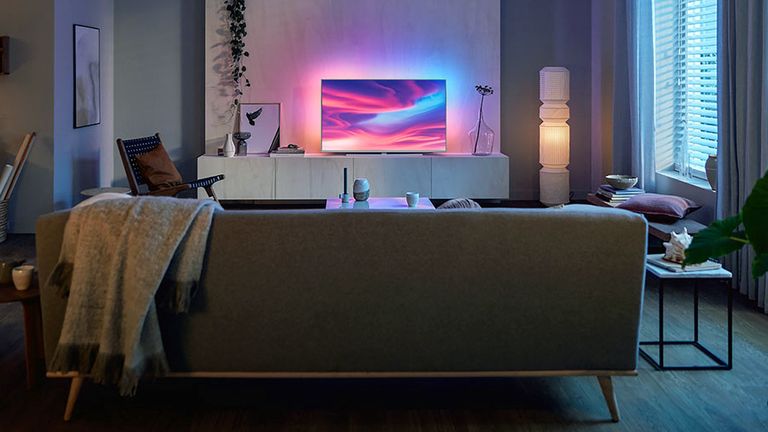 Philips Performance Series 7334, aka ‘The One’, is a gorgeous, tech-packed TV that would grace any space-age bachelor pad’s lounge, and a fantastic showcase for what modern TVs can do. So much so, it won the T3 Award for Best TV under £1,000. All the more remarkable as The One can now be had at AO.com for under £500!

The engine driving its visual excellence is the Philips P5 Perfect Picture Engine picture processor. This scans and enhances what you see frame by frame, giving you movies and TV rich in colour, high in contrast and free from glitches and motion judder.

As well as having a resolution of 4K for staggeringly pristine Ultra HD and upscaled full HD images, the 7334 also employs HDR. You’ve probably read a lot about this on T3 already, but for those catching up, HDR (‘high dynamic range’) images are filmed and presented on compatible TVs such as The One with incredibly strong contrast – bright areas become more vivid while dark areas are, well, more dark. Colours pop, making the likes of nature programmes and blockbuster comic book movies really zing.

HDR comes in various forms but with HDR10, HDR10+ and Dolby Vision, The One works with practically all HDR movies and TV on Blu-ray and streaming services. HDR10+ and Dolby Vision are the gold standard for HDR as they use metadata to tweak settings frame by frame, so you see exactly what the director had in mind when he or she yelled, ‘Action!’

Doing a similar job of taking audio to the next level, there’s support for Dolby Atmos (as well as standard Dolby Digital 5.1). Via a compatible soundbar or receiver, Atmos gives truly 3-dimensional sound, with music, dialogue and effects coming from front, behind and above. It’s incredibly immersive.

Philips Performance Series is also something of a showcase for the power of LEDs. That’s because not only does it use locally dimming LED backlight, for more consistent brightness, richer blacks and better contrast all around, compared to a standard, full-frame backlight. It also deploys LEDs in Philips’ renowned Ambilight visual enhancement.

Ambilight takes the colours that you’re seeing on screen and projects matching and complementary shades onto the back wall from the top and sides of the TV, creating an effect that can be soothing or invigorating, with a variety of modes. Owners of colour Philips Hue lights can even extend the effect into the room – particularly effective when gaming or watching sports.