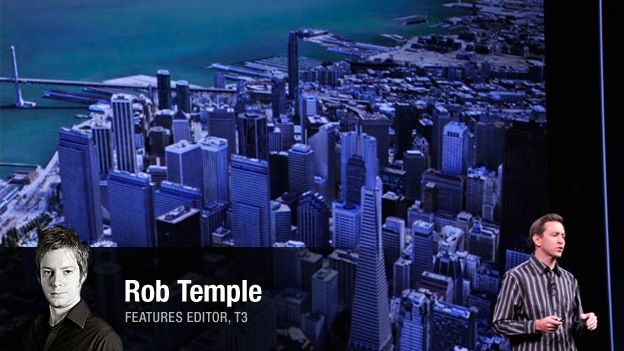 The iPhone 5 is expected to come loaded with a raft of nifty features, with Apple's new mapping service being one of them. But what will this mean for the sat nav, asks T3 Features Editor, Rob Temple

The iPhone 5 is nearly here. Rumours hint that it will be a very good telephone, apparently slightly better than the last telephone Apple released.

There's no doubt it will look splendid and have lots of magic stuff crammed in to it.

But as someone who is forever finding themselves reversing angrily out of a mews, the thing I'm most intrigued by is Maps: Apple's location-based “up yours!” to Google. Will it actually be any good?

For a long time journeys have ceased to be just about getting from A to B (Abingdon to Bridport? We're yet to work it out). We expect to be told everything: is this route the fastest? Are we about to hit a 10-mile tailback? Are we about to turn into a farm instead of Toddington Services?

And the most important factor with location devices, if we do go wrong is a solution going to be thought up in an instant or will we have to circle a roundabout until a satellite clicks into place? There really should be no excuse for getting lost in 2012. Yet still we do, all the time.

This is why the navigation app business is booming. According to a 2012 Neilson report we're very willing to shell out our hard-earned cash to find our way from point to point, with 29 per cent of consumers who pay for apps investing in maps and navigation software, second only to games (35 per cent).

To put that into more perspective, we spend more on mapping apps than we do music (reports also note that men favour mapping apps more than women, but we'll put that can of worms gently back in the cupboard…)

This is because free navigation apps – the type you're encouraged to trust on a car journey - are generally quite awful. If Apple can provide a decent, free satnav alternative it will be a great thing.

Thousands of apps use Google's location services but according to reports Apple is set to redirect all third-party app requests to its own offering, slicing into Google's downloads.

With 15 per cent of roads changing every year and Google Maps being the go-to-guy to millions, Apple has a lot to live up to in order to avoid facing a torrent of road rage from motorists worldwide.

Of course, Google Maps is a wonderful thing to have for free, but still not to be trusted anywhere near a motorway junction, but from what we've seen so far it still appears to be more detailed at street level than Apple Maps.

AM does however have a lot of fancy options that makes it appear closer to a traditional car sat nav app (some of which can cost up to £50), with its interactive 3D views, spoken turn-by-turn guidance and Siri on hand to direct you (“Siri, why have you driven me into this mews again?! No, I said mews! It's a type of pleasant enclosed British street! Why have you started playing Muse?! ARRRGGGHH!”)

Whether it'll be trustworthy enough to replace the TomTom however, I'm not so sure. Maybe this is jumping the gun, maybe it's best to first check whether the little red dot that represents you can place your position, 100 per cent of the time, on a street that a) exists and b) that you're on. That'd be nice.