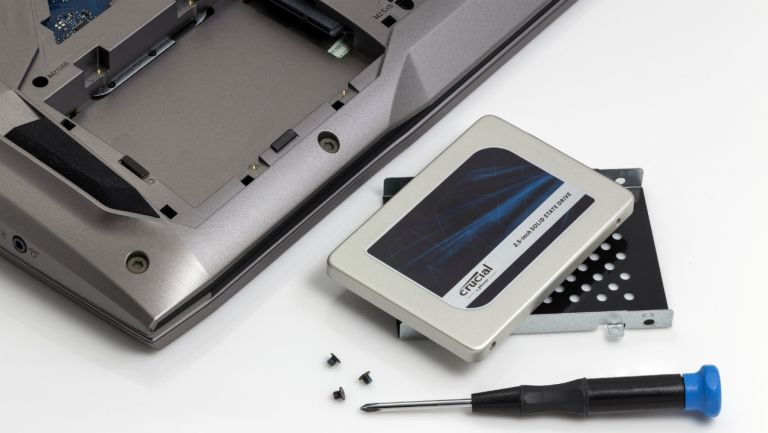 Every laptop works like a dream the first time you power it up, but over time that initial zing provided by your purchase gradually subsides. Much of this is to do with the programs we run, with applications like those found in the Adobe Creative Suite making huge demands on memory. And, if you're not blessed with having the finances to buy a new machine every year, then a hardware upgrade in the shape of a Solid State Disk (SSD) and more RAM is the way to go. It's relatively cheap, will boost the performance of your laptop and also speed up productivity.

Anyone can do it

You'll need the right size screwdriver and that's about it

What's more, if you've got a natural aversion to taking things apart then this is also an exercise that is pretty straightforward. Obviously every computer is different, so a quick and easy way of checking what you need is to use the online tool at Crucial.

Crucial's latest Solid State Disk or SSD is the beefy 750GB MX300 and will not only give you a mountain of extra storage, but will work way more efficiently than a conventional hard disk drive or HDD. SSDs are perfect for laptops because there are no moving parts, which means that they are more durable and less likely to fail. They're fast and silent too, so what's not to like?

Be sure to discharge any static before touching the parts

The laptop we wanted to upgrade was a tired Toshiba Satellite Pro Windows machine (we did the same experiment on a MacBook Pro too), which was running slow, had a bloated hard disk and was not happy tackling tasks in Creative Cloud applications. Opening a large image in Photoshop, for example, was tedious while actually making any editing manoeuvres on it caused the laptop to grind to a halt. Similarly, the formidable statistical package SPSS, which is memory hungry at the best of times was virtually unusable. So, a RAM and SSD combo made for a wise upgrade.

You'll need to initialise the SSD then clone your existing disk

The new SSD comes with a key code that will allow you to back-up all of your data to the new storage. You'll have to initialise the blank SSD, which can be done using Windows Disk Management tools. Once that's done you'll need to ensure that you have installed the Acronis True Image 2015 software via the supplied URL and have the new SSD drive plugged into your laptop with an mSATA to USB cable. This doesn't come supplied but you can get one online or at an electrical retailer for a few quid. Once you're plumbed in however, the process is straightforward and Acronis will ensure that you clone everything on your existing hard disk over to the SSD.

With the contents of your HDD cloned to the SSD then the physical part of the process is easy enough too. In the case of our Toshiba laptop there were handy covers on the back that allowed quick access to both the hard drive compartment and also the RAM installations. Switching the drives is just a like for like job, while the RAM is much the same, with the new 4GB pair being pushed into the available slots given up by the outgoing 1GB and 3GB duo. You'll obviously want to avoid touching the chips and keep greasy fingers well away. It's also a good idea to discharge yourself of any static before you touch these parts too, in order to avoid zapping your new memory.

Naturally, it can be a little bit daunting if you've never done this before, but as long as you follow the guidelines and then carry out some checks then you should be back up and running in no time. With everything screwed back in place you'll be able to boot up your laptop as per normal and, fingers crossed, everything should be just as it was before you started. The difference is that you'll have a refreshed machine, which is faster, and you'll notice that the sprightliness extends to those normally cumbersome applications that would normally make your laptop break out in a sweat.

So, how did the experiment go and did we end up with a better laptop? Well, our refreshed machine now boasts 8GB of RAM and an impressive 750GB of storage and can tackle heavy duty computing chores without fuss. It all depends how much you paid for your laptop but the costings in our example make the upgrade a very realistic proposition. The SSD cost £172.79 and the pair of RAM chips £29.99 each, while the laptop itself is essentially a born again machine. From a fat and fusty 4GB RAM, 240GB hard disk to a lean and mean 8GB, 750GB monster in just a few simple steps, it was well worth the effort.