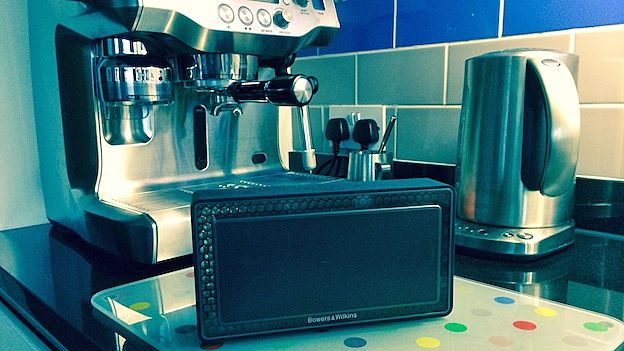 The great British hi-fi giant moves into the Bluetooth speaker market. Results are impressive but is it worth your 300 quid?

1. Bowers and Wilkins is a hi-fi brand with serious pedigree, routinely scoring high marks for its headphones and its Airplay speakers. With Airplay remaining more one for the connoisseur than the mass market, it's now pitching a tent in the Bluetooth market currently bossed by the likes of Jawbone. To this end, the B&W T7 uses the Apt-X Bluetooth codec. This gives better sound quality than standard Bluetooth, pleasing B&W's audiophile constituency. Apple doesn't support the codec but to our ears, tunes beamed from Apple devices still sounded fine on this.

2. …Speaking of which, the audio is just what you'd expect from B&W at this price (£300) and size (one of Steven King's smaller books). It is super super crisp, even at lower volumes, and while it's clearly not going to be suitable for launching a bass assault on your neighbours, it does put out a respectable amount of bottom end, especially when positioned nearer to a wall. It's up there with the best we've heard from a Bluetooth speaker. It might even be the best, in fact. We'll have a full review soon. Neat elements include the honeycomb "micro matrix" that buffers the speaker - it also happens to look cool, which is a bonus - and the pair of matched bass drivers which give that decent bit of thump, without causing the speaker to wobble off the edge of your shelf.

3. Battery life seems highly impressive. Bowers and Wilkins is quoting 20 hours, and we haven't actually needed to recharge it yet. The size also means it's easily portable, including out into the garden, or even on holiday at a push. We assume B&W's punters can afford plenty of cargo-hold luggage space. We'd maybe avoid doing that in the coming months though, as it's not waterproof, and while there is a rubber surround, it's again to dampen sonic vibrations rather than to protect it from you chucking it a wall or beat wasps to death with.

4. As with all B&W things, it looks the bollocks. Now, hilariously, the brand invariably claims that every element of its design is about sound and they care not what it looks like, form follows function and blah blah blah. So it must just be a magical coincidence that all its products just happen to look incredibly classy, with industrial design reminiscent of Jonny Ive at his peak. And that the packaging is always so immaculate. Admit it boys: you like making sexy devices!

5. Additional features? Well there's a 3.5mm input. And the little harp stings and bloops that sound when you turn it on or connect via Bluetooth were composed by high-end sound designer and Warp recording artist Mira Calix. So that's nice.

Does the overall package add up to 300 quid's worth of portable sonic joy? That's a tougher one to call, but we'd say it's definitely worth a listen. Bass fiends will probably want to look elsewhere but anyone who likes classy audio gear and needs a portable and compact speaker will be sorely tempted to shell out.

For more info, head this way.