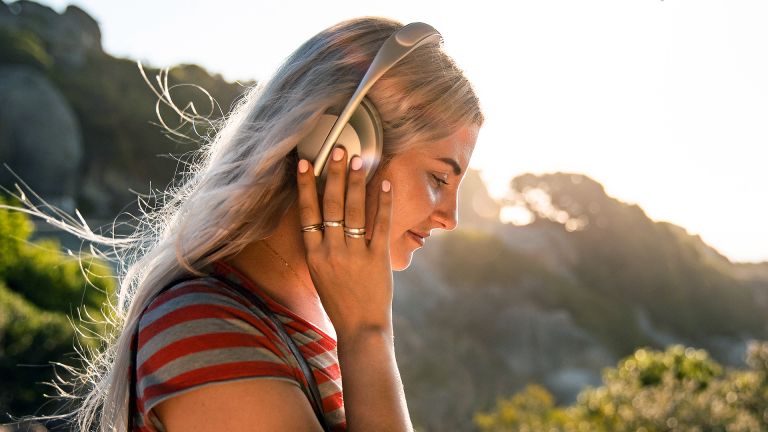 Bose Noise Cancelling Headphones 700 or Bose NC700 as they seem to be less formally known have just gone on sale. We'd have a full review up by now but I hit a few little problems, which I updated you on yesterday.

Now here's an update to the update: I managed to get the Noise Cancelling 700 working again! You see, when trying to connect to another device, I accidentally wiped my initial connection to my iPhone and entered a world of pain. Trying to reset the headphones using Bose’s own instructions had no useful effect and I started to feel quite nostalgic, because that sort of thing hadn’t happened with any high-profile product I can think of for quite some years.

It was a ‘nasty surprise‘, you might even say.

However, it turns out that Bose's new noise cancelling headphones actually make two Bluetooth connections when you set them up. One is the name you give the headphones; the other is LE followed by that name. And of course to reconnect, you have to first delete both. So now, I am back on it.

And now back to the original hands-on review...

They may have one of the most hilariously prosaic product names ever, but Bose NC700 is a BIG DEAL in the world of headphones. Bose's previous over-ear noise cancelling headphones didn't just sell like extremely hot cakes that you can listen to music through, they defined a new and lucrative market for Bluetooth wireless headphones with highly advanced active noise cancelling and highly lucrative, premium price tags.

I got my hands and indeed my ears on with Bose Noise Cancelling 700 this week and while they're not a big leap forward, they do look and sound very pleasing and have one hugely impressive trick that no other NC headphone can match. Should you be readying yourself to hand over the necessary £349.95 when they launch next week? Hey, why not? Amazon has already slashed 95p off the price!

The noise-cancelling on the old Bose QuietComfort 35 II was absolutely jaw-dropping when it launched back in 2016. Since then the likes of Sony WH1000XM3, Beats by Dr Dre Studio 3 Wireless and Bowers & Wilkins PX have arguably made improvements over the Bose NC – but not by much.

Suffice to say, the noise cancelling on Bose Noise Cancelling 700 when listening to music is very good indeed… but not really that much better than the QC35 II. It's hard to see how it could be significantly better; the bar was set so high.

Noise cancelling when making calls or using any other voice service (Alexa and Google Assistant can be activated by voice alone; Siri with a button press) is another matter. These headphones don't just let you hear what others are saying by removing background noise at your end, they also make you easier to hear at the other end, or by your virtual PA of choice.

With people making more video calls and using more virtual assistants – and even voice calls having a resurgence, apparently – Bose reckons this is the USP that will propel Noise Cancelling 700 headphones to the mega bucks, just like QC35 II.

Audio performance overall is really good. Noise cancelling can be dialled from zero, with audio pass-through ('Conversation Mode') all the way up to a cocoon-like 10. You can also choose your three favourite settings (0, 5 and 10 presumably, for most folks) and toggle between them with the press of an ear-cup button.

The quality of audio you get from these Bose headphones has a slightly unearthly, pristine quality to it, especially with the NC full on. You can't really say it sounds 'natural', cos it isn't, but it sounds very pleasing indeed. The performance seems less driving than Bose's big rival, Sony's WH-1000XM3, it's more of a smooth, measured sound that you could probably listen to for hours whilst on a long-haul flight or all day at work, so you needn't ever speak to your colleagues.

Bose Noise Cancelling Headphones 700 battery life is quoted at a comfortable 20 hours. You can plug in a cable after that, although you can't use the noise cancelling when wired.

These look and feel better than the QC35 II, I reckon. They have a less bland appearance and seemed even more comfortable – although given the short period of use I got with them, that is very much an initial finding.

The Noise Cancelling 700 don't fold down in the same way as the QC35 but the earcups can be slid up their stems to make a fairly small package, and the case provided is slimmer and more compact than on Bose's previous headphones. Seriously, who uses those cases though? I literally never have.

In traditional silver-grey or black there is nothing exciting as such about the look of Bose Noise Cancelling 700, but they are contemporary, tasteful, well machined and comfortable – what more could one want?

Controlling volume and track selection with taps and swipes on the left earcup wouldn't be my first choice, but it seemed to work well enough. Buttons handle power, voice assistants and NC level setting.

Following a smash hit like the QuietComfort 35 II is no easy task, but Bose has made a solid job of it here. When it comes to listening to music I'm not convinced there's necessarily a compelling reason to upgrade, but they certainly don't disappoint in that department.

For anyone who makes a lot of calls or is an enthusiastic user of voice assistants, this does seem like a big leap forward – the way the Noise Cancelling 700 improves the perceived clarity of your voice, as well as removing noise from what you're hearing, is really quite magical. It may even mean an end to you having to bellow, red-faced  at Alexa, Assistant or Siri because it's once again started playing It's Raining Men by The Weathergirls, when all you wanted was a weather update. That's worth 350 quid of anyone's money.

We'll have a proper Bose Noise Cancelling Headphones 700 review in time for the official launch date but the early verdict is 5 stars and a big thumbs up, especially if you use your voice a lot.