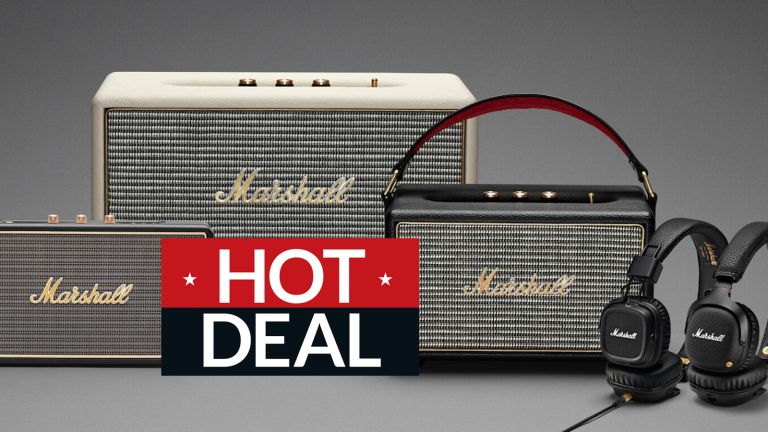 There's been plenty of great speaker deals over the last few weeks, and we keep being told you've only got a few hours left to snaffle a hard rockin' bargain from Marshall. Cos when you're livin' after midnight, rockin' to the dawn, it'll be tomorrow, and these deals will no longer be available.

UPDATE: However, although this sale was meant to end last Monday at midnight, it's still on now, although Marshall doesn't seem to be making a song and dance about it. Is this sale 'livin’ on a prayer' or is it 'gonna live forever' (nb: these are rock music references, squares)?

We don’t know, so shop promptly, and don't stop till you get enough (Marshall speakers and headphones).

Marshall headphones and speakers are widely disliked by people who are into Marshall concert amps because they are seen as inauthentic. They also tend to get slightly snotty reviews from hi-fi heads, because of way they boost up the bass and emphasise rockingness over subtlety.

We at T3, however, like nothing better than to rock the fudge out and the best Marshall speakers and headphones have an absolutely crushing sound that works wonders with rock, metal, hip-hop, pop, Wagner, the sound of buildings exploding, dance music, Beethoven and Jonathan Pearce football commentaries.

They rock, is what we're saying. At the moment, a veritable supergroup of Bluetooth and multi-room speakers, plus wired and wireless cans can still be found at Marshall's site, even though the Cyber Monday landing page is now a dead end. We've highlighted individual deals below – some of them are actually now cheaper than during the official sale!

Our top recommendations from that little lot would be as follows:

This has been around forever but it's still a very proficient, portable Bluetooth speaker with 20 hours or so of battery life and a line in.

• The enormous and monstrously loud Woburn Bluetooth speaker (£299, was £449)

Now, how's this for an endorsement: this is what T3 was listening to music on whilst working on Black Friday. The bracingly loud and clear audio, plus easy Bluetooth connectivity, made the day simply zoom by. It is louder than war.

This is a D.E.A.L. because these are truly excellent cans that are a noticeable step above the other, cheaper Marshalls in terms of both sound quality and comfort.

I've got a Stanmore Multi-Room in my hallway and it's great. The original has slightly less booming sound and is aptX Bluetooth only, but then to be honest I never actually use the multi-room part of the, er, Multi-Room. It is louder than an angry man shouting at you.

There may be some better deals at Amazon and elsewhere on a few of these Marshall deals, and they'll definitely still be available after midnight…