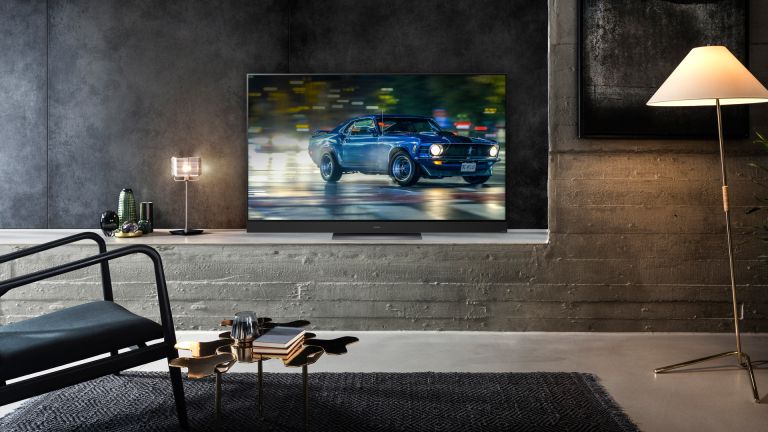 Panasonic has had a relatively low-key few years in TV, as Samsung, Sony, LG and Philips have stolen headlines and prizes for flagship TVs, and the upstart likes of Hisense have dominated the affordable markets. However, its 2019 OLED television offerings (and more affordable LED TVs) are causing a real buzz. 4K is now the norm in new televisions, and the industry desperately wants OLED to be bought by more than just a small number of aficionados. Panasonic's 2019 4K OLED models should help move TV Land towards that goal, they're definitely among the coolest new TVs of 2019.

Panasonic has really ramped up commitment to OLED TV this year. At its annual product convention in Frankfurt, it showed off 4 stunning OLED tellies, whilst also lavishing some love on LED LCD too.

The big theme was multi-HDR support. Whether your home cinema poison is Dolby Vision or HDR10+, OLED or LED LCD, Panasonic has you covered. However, with the range-topping GZ2000, Panasonic seems to have something really special. I've had early looks at most of the big flagship TVs that are going to hit shelves very soon, and so far, the GZ2000 looks like the cream of the crop. The roll-up LG OLED R might be the TV with the most wow factor, and Samsung's incredible 8K TVs may have the most pixels, but for sheer viewing and listening enjoyment, the Panasonic range-topper might well have the edge…

That 2019 Panasonic TV line-up in full

First seen at CES in January, the brand’s flagship 4K OLED UHD model is the GZ2000.  It stole the show in Las Vegas, and looked every bit as good at Panacon.

The GZ2000 boasts a couple of neat innovations. Most importantly, it uses a customised OLED panel. Adapting techniques first developed for Panasonic's legendary plasma TVs, the brand's engineers have invented a new cooling technology which allows the panel to be driven harder and therefore brighter, both in terms of APL (average picture level) and HDR peak brightness.

That's the science. The reality is that image quality is sensational. I drooled a lot, then drooled some more.

Although other TVs have been 'Atmos ready', the GZ2000 is also the first TV in the world to implement a properly working Dolby Atmos sound system, tuned by Technics. The rear of the panel incorporates up-firing drivers that create a genuine sense of height and immersion and there's unusually hefty bass – not something you normally expect from a telly.

The good news is that the GZ2000 will be joined by three more affordable models: the GZ1500, GZ1000 and GZ950. They all support Dolby Atmos, but via more conventional sound systems – you'll need external speakers to get the full effect – while the OLED panels on these models are standard, un-tweaked ones. Or less tweaked, anyway. There's a fair amount of image processing going on, of course.

This awesome OLED foursome has also been colour tuned by leading Hollywood creative Stefan Sonnenfeld. His name might not be familiar to you, but his work certainly will be. Sonnenfeld’s credits include A Star is Born, Wonder Woman, Man of Steel, Star Wars: The Force Awakens and Jurassic World. Whatever you think of the quality of plotting and direction of those films, you can't really argue with their visual sumptuousness.

The GZ950 provides an OLED jumping on point although, with its metal anodised pedestal, it looks not unlike the brand’s old premium plasmas. The step-up GZ1000 has the same picture and panel spec, but a slightly different aesthetic, with an L-shaped stand.

Panasonic has designed its TVs this year so that its incoming soundbars fit seamlessly beneath them. However, the GZ1500, although it shares the same panel design as its stablemates, also integrates a front-firing Blade sound system, for better audio straight out of the box.

All four Panasonic OLED TVs come in both 65-inch and 55-inch screen sizes, and are compatible with Amazon Alexa and Google Assistant, for integration into smart home systems and easier searching for the films and TV progs you want.

Panasonic has also made some cosmetic changes to its smart platform for 2019.  My Home Screen 4.0 has a redesigned interface, with shortcut tabs now located at the bottom of the screen. The interface includes icons for shortcuts to live TV, connected devices and streaming services like Netflix and Amazon Prime Video. Phew.

Want something cheaper than an OLED? Panasonic has three LED LCD models on the way which might float your boat.

Providing a low cost entry point is the GX700 series. Available in 40-, 50-, 58- and 65-inch screen sizes, it’s a replacement for the FX series of 2018. This model doesn’t offer Dolby Vision, but is HDR10+ compliant along with HDR10 and HLG, and its images have a pleasing level of pop, thanks to a 4K Studio Colour Engine and Wide Colour Gamut support.

In truth though, it wasn’t the picture that caught our attention, but the design. Panasonic has rethought its manufacturing process, so it can more tightly press and mount the LCD module. The result is surprisingly slick. The stand has centred feet, making it easy to stand on any AV furniture.

Putting a real bounce into our step though was the mid-range GX800. This model will be available in 40-, 50-, 58- and 65-inch screen sizes, and features both HDR10+ and Dolby Vision support, as well as HLG and regular HDR10. It’s also Dolby Atmos enabled, so you can stream out immersive audio to a Dolby Atmos soundbar or AV receiver.

The GX800 is also compatible with Amazon Alexa and Google Assistant. While Panasonic isn’t talking prices, we’re led to believe you’ll be able to pick up a big screen GX800 for less than a grand.

Like the GX700, it’s super-slim, but comes with a smart brushed centre pedestal.

Completing Panasonic’s LED LCD line-up is the GX920. Only available in a 75-inch screen size, the GX920 is also Dolby Vision and Atmos enabled, and has a 100Hz screen refresh rate. Design incorporates a classic style Panasonic cross-foot pedestal with full metal bezel.

Panasonic also showed off a GX900, but don’t get too excited. This is a cosmetic variant of the GX800 for the German market, it’s not coming to the UK. And across Europe, the GX920 has the designation of GX940 (try not to get too confused).

Incidentally, all the Panasonic LCD TVs are edge-lit. The brand has no full array models in its range.

Interestingly, all Panasonic screens down to the GX800 support the HLG Photo format, which also happens to be found on certain Panasonic Lumix cameras. HLG Photo enables photographers to capture more detail in shaded areas without compromising exposure. It’s particularly effective with night shots, where you might, for example, want to reveal brickwork detail in shadowed areas of a church, without ruining the mood of a cemetery scene.