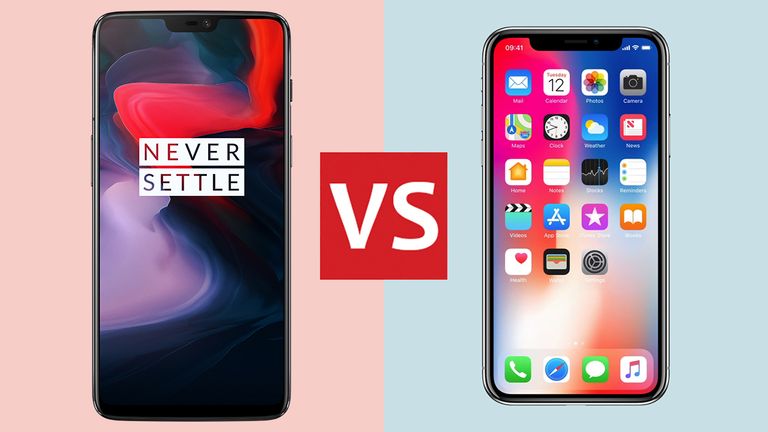 You'd be hard-pressed to find anyone not agreeing with the assessment that the OnePlus 6 and the iPhone X are two of the best phones of the last 12 months – they're sleek, they're fast, and they show off some of the best of what Android and iOS are capable of doing.

But which phone is the better phone? Maybe there's no definitive answer to that, but we're going to give it a go anyway, pitting these two excellent handsets against each other in every department that matters. Read on to find out which of these phones emerges on top.

They both feature notches on the front of the display, these two phones; they've both banished bezels right to the sides of the screen; they're both made from glass, front and back, with an aluminium frame.

You can see why it might be said that the OnePlus 6 (May 2018) is following the design cues of the iPhone X (September 2017), but we prefer to give OnePlus a bit more credit than that. Whatever the ins and outs of the design process, we've got two fantastic-looking phones to compare here.

In our eyes the iPhone X has just a little more sleekness to it, and it's slightly thinner too, though of course your mileage may vary as you weigh up the aesthetics of these two phones. You can't have any complaints about how either of them look though.

The iPhone X makes use of Apple's own Apple A11 Bionic chip and 3GB of RAM, together with 64GB or 256GB of internal storage. On paper that's inferior to the OnePlus rival, but as we know, Apple excels at making hardware and software work in tandem together, and the iPhone X absolutely screams along.

We reckon the iPhone X just edges it in the photography department – its dual-lens 12MP+12MP rear-facing snapper is hands-down one of the best in the business. The OnePlus 6 camera, a dual-lens 16MP+20MP model, is really good as well, and isn't far behind in most photo-taking scenarios.

If you're in the position of choosing between these phones then a big part of your decision is going to be deciding whether you want to go for Android or iOS, Google or Apple – it really depends which mobile OS you're most used to and which apps you're already most heavily invested in.

Apple of course has made much of the Face ID required to unlock the iPhone X, while the OnePlus 6 sticks with the old traditional fingerprint scanner. The Apple phone also has the edge with IP67 waterproofing and wireless charging capabilities, two features that the OnePlus 6 can't match.

What the OnePlus 6 does have is a 3.5mm audio port, so you can carry on using your existing wired headphones, no dongle required (the iPhone X comes with a Lightning-to-3.5mm dongle in the box).

Both phones offer some variety of fast charging, though this is really becoming the norm on handsets now – it would seem the OnePlus 6 just has the slight edge when it comes to the time taken to juice up your phone, but both should charge up fairly rapidly.

Anyone buying a smartphone in 2018 – at least at the premium end of the market – has to consider both the OnePlus 6 and the iPhone X. Both these phones have top-end specs, top-end style, and plenty of useful features, and they'll both serve you well for several years.

Already heavily invested in Apple products? Taken with the look and feel of the iPhone X? Then it's possible that the iPhone X is the phone for you. On the downside, it does cost close to twice as much as its OnePlus rival, which immediately puts the comparison in a different light.

The OnePlus 6 might not have wireless charging or waterproofing, but it has some mighty fine specs nevertheless – offering up to 8GB of RAM, more than double the amount inside the iPhone X, is incredible. If you're more of an Android fan, then OnePlus' own OxygenOS is a fantastic version of Android that's a pleasure to use.

Considering the high specs and low (ish) price of the OnePlus 6, we'd be tempted to choose the Android phone as our favourite out of these two, though the right pick is going to be different for everyone. Let's see how Apple responds in September.