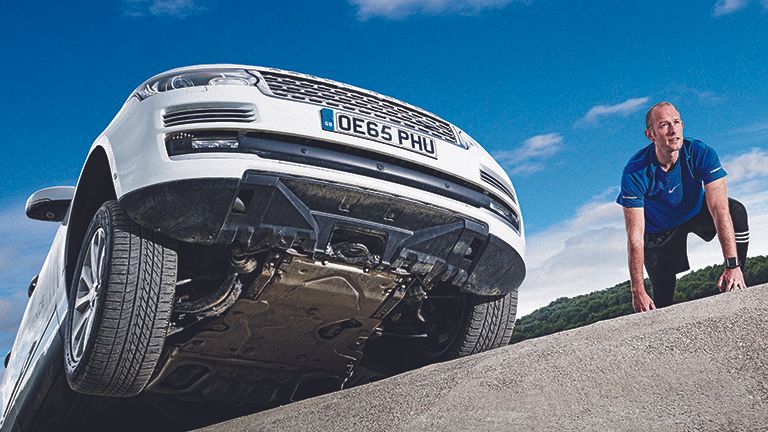 This Man Vs Tech is more like Man vs Machine, as fitness freak, er, enthusiast Luke edwards takes on a top-end Range Rover, driven by car buff spencer hart, over a challenging off-road course somewhere in hertfordshire. To see how good-old-fashioned muscle copes against the latest motoring tech, let's hear from Luke and spencer…

The race from Luke's perspective

The white Range Rover looks out of place in the dense forest. I stand beside it, trying to hide my pre-race nerves. The constant attack of flies, thick ferns and stench of stagnant water makes me feel like I've landed a part in a Star Wars film – except I have no back-up from Ewoks for this battle. What I do have is some top kit.

One of my choices is a pair of Adidas Response Long Tights, and I'm confident they'll do a good job of keeping the flies from biting. Not that those critters will have much chance of keeping up once we set off.

We begin the race – I explode off the start line, trying to put as much distance between me and the car as possible. I can't run flat-out, as I need to find the right footing in the undergrowth, but I still outpace the Range Rover, which is forced to slow for deep water. I imagine it being wet inside the car, too, from Spencer's tears.

I head high through the trees to break out of the woods first. Between me and the finish line is a valley. While the Range Rover has to ease up to negotiate the hill, gravity enables me to waft down. I thought the Adidas Terrex Agravic GTX kicks would earn their worth in the mud, but it's actually on steep declines that they impress the most. At some points, I come close to performing a bum-slide manoeuvre, yet the Continental soles make sure I don't fall flat on my face. Ultimately, that means I stay ahead. Until the terrain levels out…

The level field isn't ideal. Even at full pace, the open stretches mean I'm soon eating Spencer's dust. My Osprey backpack has a built-in water pack, so washing that dust out is a doddle. I've also crammed the quick-access pockets with Clif Bars and High5 Gels for a quick refuel. I then ditch the bag for the fastest possible finish.

Thanks to the maps built into the Garmin Epix watch, I'm able to see my paths clearly without having to dig out my phone.

On the occasions that I do refer to my Samsung Galaxy S7 Edge, it copes admirably with getting soaking-wet after puddle-jumps. IP68 waterproofing is just one of the phone's many fantastic features.

The final stretch is marked with steep rocks but, armed with grippy kicks and lightweight kit, I explode up this section, leaving the car in my wake. No amount of kit can stop the acid in my thighs on the finish line, but it's worth it to taste victory. I expect a Star Wars-style medal ceremony but get a bottle of water instead – which is probably better. I won, and not even a teary-eyed Spencer whinging about comfort can take that away from me.

The race from Spencer's perspective

This whole shebang started during a spirited conversation over a pint. “F**k off! There's no way you're faster than a Land Rover,” I spluttered, fuelled by liquid courage. Fast forward two weeks, and we're standing in a muddy forest, surrounded by flies, with a 10km route in front of us.

The excuses start early. Luke is stiff due to “over-training”, while I'm worried about tyre pressure and whether I'll have to pay for any damage to the Range Rover. I climb in, set the air-con to a crisp 18 degrees, and move my seat into the perfect position. Once I'm comfy, it's time to prepare the vehicle for the first part of the race. This means increasing the ride height (which is easy, thanks to the air suspension), setting the Terrain Response system to 'Mud and Ruts', and engaging the low-range gearbox to help get traction. It doesn't take long and is easy to do, despite Luke's incessant complaints about the smell outside.

I signal to Luke that I'm ready, and before I know it, he's torn off through the dense forest. My start is a little slower – whereas he can take the most direct route, I'm confined to a narrow, waterlogged path. The water is full of mud, so I can't see how deep it is. A few taps on the InControl screen brings up the vehicle's wade sensors, which tell me the depth of the water and if I'm in too deep. This stops me from flooding the engine and requiring a tow.

Once out of the forest, it's time to descend into the valley. Despite Luke's quick start, I manage to draw level with him, until we come to a 45-degree incline. I slow to a complete stop while Luke ploughs on. This isn't a slope you'd drive down in a regular car – it's almost vertical. But I engage Hill Descent Control, which will enable me to drive down the slope without touching the brake pedal, and pull up to the brink. The Range Rover slowly rolls over the edge. Releasing the brake pedal is petrifying, like I'm on some kind of theme-park ride, but the HDC system quickly kicks in and the ABS rolls me safely down to terra firma.

I can see Luke in the distance. Between us is a flat, open field. Perfect – I can finally use the full potential of that massive diesel engine. With 'Grass, Gravel, Snow' selected in the Terrain Response System, I floor the throttle and catch up with Luke in no time. I consider running him over and storming to victory, but I settle for steamrolling past, just close enough to kick dust into his face.

I approach the final obstacle – a rock climb. Reverting to low range, I crawl over the boulders, scared I'll rip the bumper off. Out of nowhere, Luke comes tearing past, jumping from rock to rock like Spider-Man.

After successfully negotiating the rock crawl with all bumpers intact, I'm able to stretch the Range Rover's legs again. But it's too late. As I tear up the hill overlooking Eastnor Castle, Luke comes into view, bent double at the finish line trying to catch his breath. I pull up beside him, trying not to look dejected. While Luke gloats, I decide that, even though he's 'technically' won, my journey was more comfy and enjoyable – so who really won? I'll let you decide...