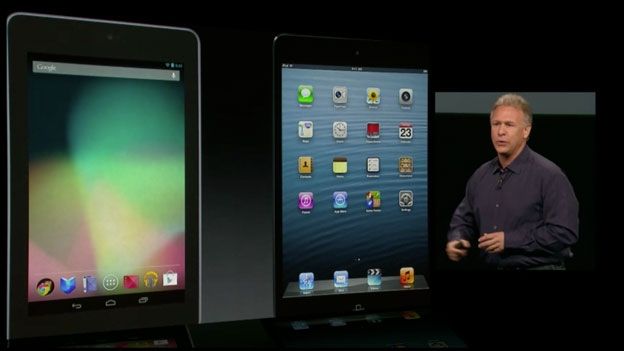 iPad Mini vs Nexus 7: It's Apple vs Android and for once it's not in the court room. Let the 7-inch tablet battle commence...

Steve Jobs once branded 7-inch tablets as “tweeners” and stated that the size was useless unless you include sandpaper so users can sand their fingers down to a quarter of their size.”

Despite the former Apple CEO who passed away last year being so publicly against a smaller slate, Apple decided to take the fight to Amazon and Google by announcing the iPad Mini.

If there was any doubt that this was a response to the success of the Nexus 7, while the Cupertino company did not name the tablet when comparing its 7.9-inch device to Google-powered tablets, it's was clear to everyone else that was the intention.

So how does the smaller Apple tablet compare to the Award-winning Nexus 7? We take a look at how the specs shape up

iPad Mini: Made from an aluminium and glass design, the iPad Mini weighs in at just 308g which Apple claims makes it lighter than a pad of paper. At 7.2mm thin it's as slender as a pencil and 23% slimmer than the larger 9.7-inch new iPad.

Nexus 7: Sporting the Android standard black bezel display, the Nexus 7 features a rubberized dimple-like removable back that makes it comfortable to grip for long periods. Weighing in at 340g and measuring in at 10.5mm thick, the Nexus 7 is lighter than the Kindle Fire (413g) and the Samsung Galaxy Tab 2 7.0 (345g), but clearly not quite as slender as the iPad Mini.

iPad Mini: For so long everyone thought it was going to be a 7.85-inch screen, but Apple went a little bit bigger with its 7.9-inch LED Multi-Touch display. Packing IPS display tech to deliver the wide viewing angles, the Retina display is disappointingly missing in action but the 1024x768 resolution with 163 ppi is the same screen quality as the iPad 2. The extra screen estate should mean 67% more room than 7-inch tablet devices to browse and watch videos.

Nexus 7: One thing that Asus has managed to nail on the tablet front is making a beautiful iPad-rivalling tablet screen like the one on the Transformer Prime. So, prospective Nexus 7 owners can expect a 1280 x 800 HD display with 216 ppi which might not put it in the same category in terms of clarity and vibrancy as the 9.7-inch iPad, but does ensure it surpasses the 1024 x 600 resolutions sported by its closest 7-inch tablet rivals and the iPad Mini. The Corning glass coating should also ensure it can withstand the odd knock or two.

iPad Mini: Bringing it line with the iPhone 4S in the snapping department, the iPad Mini has a 5-megapixel rear-facing camera, with backside illumination for low lit photography. It also packs a front-facing FaceTime HD camera for high resolution video chats and can shoot also 1080p HD video with image stabilization to keep things steady.

Nexus 7: We have yet to be convinced by rear-facing cameras on tablets, and find it hard to accept that people would prefer to take a snap with one over a smartphone, and clearly Google think the same, opting only to include a 1.2-megapixel front-facing camera which should suitably cover all your Skype and Google + chatting needs.

iPad Mini: Set to get the iOS 6 treatment, the latest Apple OS promises a slightly tweaked user interface with a new look App Store and iCloud support, a smarter Siri that will launch apps, FaceTime over 3G and TomTom-powered Apple Maps. It's still one of the best mobile operating systems and we expect it be as slick on the smaller Apple tablet as it is on current iOS devices.

Nexus 7: Shipping with Android 4.1 Jelly Bean out of the box, the most notable features most notably brings a speedier performance thanks to Project Butter, a smarter keyboard, a more sophisticated voice search and the new Google Now service. Android 4.1.2 has also just been released which now enables users to view home screens in landscape, which some early Nexus 7 owners did have an issue with.

iPad Mini: It's not quite the A6X nestled inside the new iPad 4th generation, but the iPad Mini gets the same A5 processor packed in the iPad 2 and iPhone 4S. The dualcore architecture should make it still suitably zippy, but it's not quite the quadcore that the Nexus 7 is rocking.

Nexus 7: If there is one thing that the Nexus 7 has over current 7-inch tablet offerings is serious power under the hood. Packing a Tegra 3 quadcore processor (which makes it the world's first quadcore 7-inch tablet) to tackle multitasking and deliver smooth streaming video, the 12-core GPU should give it enough grunt to and handle the most graphically demanding mobile games. The addition of a fifth battery-saving core which many new smartphones launching in 2012 will include, takes care of everyday tasks like emails, updating Twitter and Facebook feeds and watching videos which will help to preserve battery life.

iPad Mini: Apple claims that the dual band 802.11n Wi-Fi on board will deliver perform twice as good as previous iPad models, while LTE compatibility on top of the standard 3G support means its primed for 4G while new Bluetooth 4.0 is also on board.

Nexus 7: If you are hoping to browse the web on the Nexus 7 on your travels you are going to have to get some tethering action on the go as the tablet only supports Wi-Fi. If you can make do with that, there is also Bluetooth support, GPS and NFC capability courtesy of Android Beam to instantly send pictures and video. A 3G model has however been tipped to land at Google's press event later this month.

iPad Mini: The iPad Mini should make it through the day with Apple promising 10 hours of battery life before you have to hook that Lightning connector up again, which is good news considering the comprehensive tech that has been packed inside.

Nexus 7: Google claims that the Nexus 7 will deliver a decent nine hours if you are consuming content like HD video, but if you are simply reading an e-book or browsing the web, expect around 10 hours of Nexus 7 playtime.

iPad Mini: Kicking off with the 16GB Wi-Fi only model, those looking to snap up the smaller iPad will need to part with £269 with those requiring 32GB or 64GB of internal storage having to splurge £349 and £429 respectively. On the Wi-Fi + 3G front, wannabe iPad Mini owners looking to access the web at will need to part with £369, £449 or £529 depending on their choice of 16GB, 32GB or 64GB storage options.

Nexus 7: One of the big selling points of the Nexus 7 was pricing with the 8GB version (which is currently out of stock) priced at £159 up to £199 for the 16GB model. Recent rumours suggest that Google could unveil a 32GB model before the end of the year.

Of course we've had considerably more play time with the Nexus 7 than the iPad Mini so it's difficult to build a true comparison without truly putting both to the test. The Nexus 7 was T3's Tablet and Gadget of the Year having delivered a truly impressive tablet device that didn't costan arm and a leg to buy one. The iPad Mini looks set to build on the runaway success of the current iPad and if it performs as well as the current Apple tablets, the Cupertino company could be onto a winner. The difference in price could prove decisive, but we will wait to see what the iPad Mini is truly capable of before we can pass judgement.

iPad Mini or Nexus 7? Which one would you buy? Let us know in the comments section below.