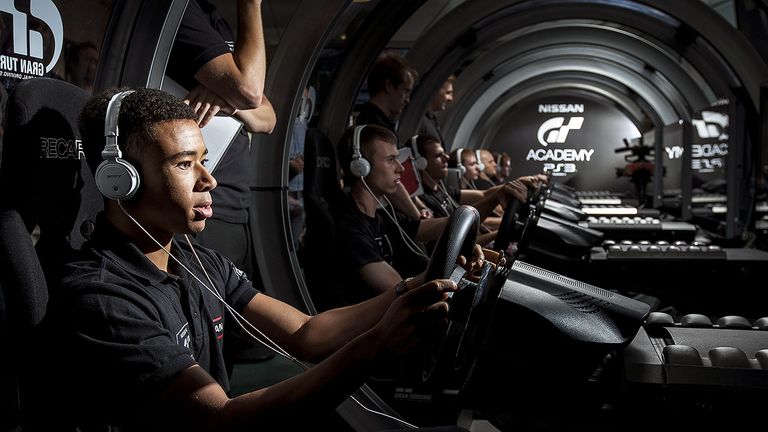 Will honing your hot laps in the latest driving game catapult you onto the podium of a real-world racing series. Actually, that has pretty much happened with the GT Academy run by Nissan and Sony and based on the Gran Tourismo game series.

What's more, every single current Formula 1 driver makes frequent use of driving simulators. Clearly, there's something even the world's most skilled driver's can learn from virtual driving.

As it happens, your erstwhile correspondent has some experience in this area. No, not F1 cars or even delusions of racing grandeur. Rather, driving the infamous Nurburgring track in Germany in a video game before lapping it in real life. Hold that thought.

Do games make your brain better?

Pretty much as soon as video games appeared, psychologists and neuroscientists began wondering whether playing them might be beneficial in terms of things like reaction times.

In simple terms the clear answer to this question is that games can have a measurable benefit on both reaction times and broader cognition. To site just one example (there are lots), back in 2010 researchers at the University of Rochester in New York, USA, found that people who had been playing video games didn't just have better reaction times. They made more accurate decisions.

That said, the question of whether gaming has a lasting impact on mental or physical acuity is more complicated. We'll take the fifth amendment on that, so to speak.

How do the pros use driving games?

This is where it gets a bit tricky. The simulators that Formula 1 teams use are epic bits of kit that mere mortals won't likely be able to mimic at home.

One of Ferrari's simulators, for instance has five giant 3D screens, a 3,500W sound system and the whole shebang weighs a preposterous 200 tonnes.

According to the guy who designed one of Ferrari's simulators, Marco Fainello, a good simulator makes it possible to, “drive a model of a virtual vehicle, experiencing sensations that can be referenced to a real one. With a sufficiently experienced driver and engineers, who analyse the results, it is possible for a simulator test to produce data useful to the development of the car and in terms of how the driver interacts with the handling and the controls on the vehicle.”

What's more, F1 drivers have been known to use games consoles to learn new tracks, though opinion among them has been divided over the years on how useful that is.

Then there's the GT Academy run by Nissan and Sony. The shizzle here involves using the Gran Tourismo game on the Sony PlayStation console to pluck potential race winners out of gaming obscurity. The competition has turned several gamers with no real-world competition experience into proper racing drivers.

Brit Jann Mardenborough, for instance, won the GT Academy back in 2011. Before he entered the competition, he'd never driven a racing car. A few years on and he now races for Nissan in the LMP1 class which is basically the pinnacle of sports car racing as seen at Le Mans. Serious stuff, then. That said, drivers that come through the GT Academy get extensive real-world training before they get anywhere near a real race.

Then there's the car manufacturers who use simulators to speed up and refine development. Mercedes has what it calls the most powerful simulator in the entire automotive industry. The huge "moving-base" machine sits on a 12-metre long rail system, enabling it to simulate transverse or longitudinal movements such as high speed lane changes and thus allow in-depth research into driver and vehicle behaviour on the road.

How about the rest of us?

The sheer range of variables here makes this a complicated question. What games are you playing? Some are much more realistic in terms of physics and road and track layouts than others. What equipment do you have for gaming? How experienced are you as a driver in the real world? What cars have you driven? What are you trying to achieve?

Using a game to improve normal road driving isn't much of a goer. They're just isn't a lot of game software developed to mimic the daily drudgery of road driving. No doubt, sitting in traffic on the M25 is dull enough in the real world, let alone a simulation.

Of course, you can hone your pedestrian maiming skills in games like Grand Theft Auto. But even if that was a good idea, the driving physics aren't exactly hyper realistic. But what about track driving? Can you use a game and a plug-in steering wheel to improve your track driving?

Try this by way of anecdotal insight. We know what it's like to drive arguably the world's greatest race circuit for the first time having driven it previously only a video game.

We speak, of course, of the Nurburgring Nordschleife in Germany. It's a particularly interesting example because at around 13 miles in length it's incredibly hard to learn. Depending on how you count them there are between 75 and 150 corners. Experienced hands reckon it takes hundreds of laps to learn. At around 20 euros a lap, that's not cheap.

Unsurprisingly, there are numerous games with virtual versions of the Nurburgring Nordschleife. Multiple versions of Gran Tourismo, for starters, ditto the Forza series, old favourites like GTR Evolution and, well, many more. Equipment-wise, a steering wheel and pedal set are essential but the choice between a PC and a games console less so – they'll all get the job done.

And realistically, that's going to be the limit for most people. Mega-money setups with hydraulic actuators and the rest are a non-starter.

Anyway, what we can say for sure is this. If you've familiarised yourself with the 'Ring in-game, you will absolutely recognise your surroundings in real life. It's genuinely surreal, that sense of the parallel memory lining up with what you're seeing through the windscreen.

So, you know where you are and what's coming up, which is a huge help. In theory, you also have an idea of how much speed you can carry as you tip the car into a famous corner like the Karousel.

However, committing to that using that knowledge fully is tricky. There's a huge difference between driving risk-free in game and taking a real car to the limit. Games simply don't have the same feedback as a real car – at least that's certainly true with the typical wheel and pedal setup, as opposed to a mega-money simulator - and can't prepare you to read the subtle messages cars send out as they approach the limit.

It's difficult to immediately translate in-game speeds to real-world speeds, too. In other words, you'd almost definitely come a cropper if you attempted to immediately translate your virtual pace into real-world speed. Where driving games will help is if you're dipping in and out of them as a training tool rather than expecting them to give you all the skills you need on their own.

You can experiment with carrying a bit more speed here or get an idea what it's like to get the car out of shape and sliding there, all without taking any risk. But no matter how hot you are in Gran Tourismo 6, Lewis Hamilton's job is probably safe.