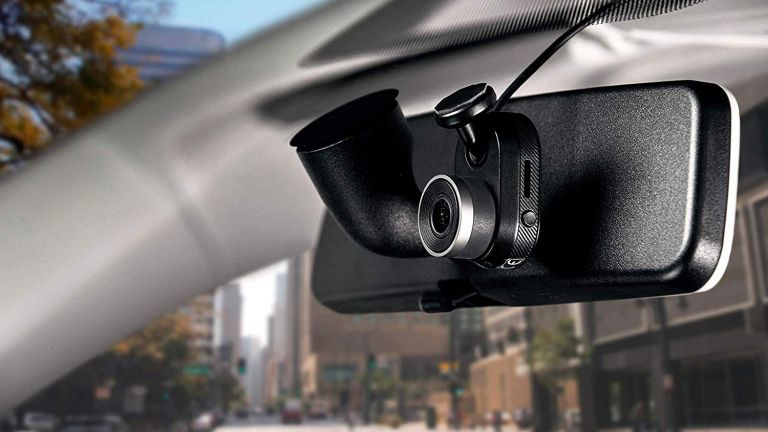 The Dash Cam Mini is compact, affordable, and ditches extra features in favour of being as simple as possible. It records 1080p video through a 140-degree lens, connects to a smartphone app via Wi-Fi, and is the very essence of ‘set it and forget it’.

The last couple of years has seen dash cam makers embark on an arms race to see who can pack the most driver-assistance features into what was once a simple device.

Now though, Garmin has stripped away all but the absolute necessities, dropped the price to just under £100, and offers the most compact dash cam money can buy.

The Dash Cam Mini is probably smaller than your car’s key fob, meaning it fits neatly behind the rear view mirror or most cars, where it quietly but reliably gets on with the job of shooting Full HD video and saving it to a microSD card.

It also connects to the Garmin Drive smartphone app over Wi-Fi for video transfer, and there’s a dual USB port adapter in the box for taking power from your car’s 12V socket.

If you’re looking for the smallest dash cam possible, then you have come to the right place. The Dash Cam Mini really is tiny, and should fit comfortably out of sight behind the rear view mirror of most vehicles.

Other than ‘really rather small’, there isn’t much more to say about the Mini’s design; it covers the basics, in that the front is taken up entirely by the camera’s lens and a socket for attaching to the included windscreen mount.

This is the same connection as used by other Garmin dash cams, so if you’ve already got a mount stuck to your car’s windscreen (or the magnetic metal disc included with the Dash Cam 55), then the Mini will clip right into place.

If you’re new to dash cams, then fitting the Garmin Mini to your windscreen is as simple as peeling off some protective film from the sticky pad, then pushing it against your windscreen for a moment until it sticks. From then on, you can quickly unclip the camera from its mounting arm (which is about half an inch long and remains attached to the windscreen) to hide it from view.

That said, we would feel comfortable leaving the Garmin Dash Cam Mini permanently in our car, due to how discreet it looks from both inside and out.

The ball-and-socket connection to the mounting arm offers a sturdy grip, keeping the camera in place no matter what angle you position it at. This makes for stable video recording, and zero movement when driving over speed bumps or caught out by a pothole.

Garmin has given the Dash Cam Mini a plain, matt black finish which feels like it’ll shrug off being chucked into the glovebox between uses.

There is no touchscreen on the Dash Cam Mini, or a display of any kind. Instead, one button on the side mutes and unmutes the microphone, and a larger button on the back saves a section of video when pressed. On one side is a microSD card slot (although no card is included in the box), and on the other there is a microUSB port for power.

Two USB cables are included in the box, one long and one short, giving you the option of plugging the camera in each time you use it, or routing the longer cable around the dashboard of your car for a more permanent setup. An included adapter fits into your car’s 12V lighter socket and provides two USB ports, one for powering the camera and a spare for powering something else like your smartphone.

With its lack of display, voice control and driver assistance, there isn’t much to say about the features of the Dash Cam Mini. There is, however, a Wi-Fi connection for connecting the camera to the Garmin Drive smartphone app (for iOS and Android), more of which in the software section below.

There is no battery inside the Mini, so it will only work when it is plugged in. Other, larger models of Garmin dash cam have their own batteries, but often last for just 30 minutes, so plugging in is generally the norm, even for pricier options.

Of course, the main features here are the Mini’s diminutive size, low price and simplicity. It doesn’t try to offer a huge range of features which many drivers may switch off in any case, and instead focuses on the fundamentals with zero distractions.

The Dash Cam Mini shoots at a lower resolution than most of Garmin’s 2019 dash cam range, but this is still 1080p, also known as Full HD. This means footage is perfectly sharp and clear, and while it lacks HDR, the picture quality is perfectly acceptable for such a small camera.

The addition of HDR would help to pull out more detail from the shadows and over-exposed parts of video, but in our testing we found the results entirely adequate, with details sharp and number plates legible. Given the size and price, we can’t complain.

Garmin has fitted the Dash Cam Mini with a 140-degree lens. This is a little narrower than the 180-degree option of some more expensive Garmin products, but we found the picture spans fully from one side of our car to the other, giving a complete view of the road ahead and a little to either side, too.

Camera positioning is key here, and thanks to the Mini’s size it is easy to fit right in the middle of your screen, without interfering with the rear view mirror.

The free Garmin Drive app for iOS and Android is used to help you position the camera correctly, by sending a live video feed from the camera to your phone over a direct Wi-Fi connection.

You can also use the app to adjust a couple of settings, such as lowering the video resolution to 720, which reduces the quality but also takes up less space on your micro SD card.

Once set up, you no longer need to use the smartphone app - and that is a good thing, as we often found it struggled to connect to our iPhone over Wi-Fi without trying multiple times.

When working, this connection serves as a useful way to view footage taken by the camera (and snap a photo, if you so wish), but otherwise you can just pop out the microSD card and transfer directly from that to your computer or other device.

Another feature of the Drive app is the ability to set up several Garmin dash cams at once. That way, you can stick a Mini on both your front and rear screens, then have both record at the same time - or you could even fix up to four to larger vehicles like trucks or motorhomes, giving you a 360-degree recording should you get caught in an accident which isn’t head-on.

The Garmin Dash Cam Mini does exactly what you expect it to, and no more. It is small and very simple to use, fits neatly behind your rear view mirror and gets on with the job of recording video quietly in the background. It really is a case of ‘set-it-and-forget-it’, with the camera recording video constantly until the microSD card gets full, at which point the oldest footage is overwritten. There isn’t even a beep when it is powered on and off, which we like - just a small status light.

When a collision is detected (or you press the save button) this footage is saved separately and will not be overwritten, giving you potentially crucial evidence should you ever need to prove someone else was at fault.

There are no extra features here - no driver assistance, no parking mode, no voice control and no speed camera alerts - but for the driver who wants zero distractions and minimum fuss, the Dash Cam Mini is perfect.

It is perhaps a little on the expensive side, given it lacks GPS. Also, the Garmin Dash Cam 55 from 2018 is now around £130 and come with extra features like a touch screen, voice control and speed warnings.

But with those comes complication and potential distraction; the Dash Cam Mini does everything in the background, silently and in a way you quickly forget it’s even there. For that alone we think the Mini is hard to fault.