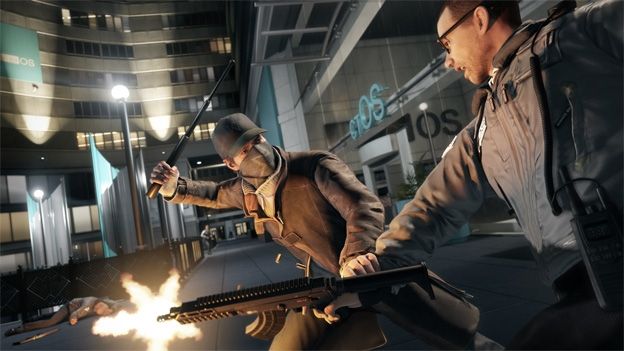 You know something? Your phone sucks. Oh, it's probably very stylish. Its touchscreen offers a plethora of apps and maybe the reception's rather good. But can it scramble traffic lights? Can it cause a manhole cover to explode upwards in the center of the street? Can it hack cameras, deploy bollards and hook you into the inner workings of a citywide network? No? Your phone sucks

Aiden Pearce's phone does not suck. In fact, Aiden Pearce's phone is a miracle of modern technology. Not only does it offer the aforementioned functionality, this listening device can open car doors and dismantle alarms. It can destroy homing signals embedded beneath flesh. It can remotely detonate explosives.

It even contains a series of VR mini-games that offer Aiden the odd moment of respite between cleaning up the cyber landscape of Chicago. Yes, the protagonist of Watch Dogs has an amazing phone.

Aiden's phone in Watch Dogs is as much a character as any of the many shady folk the player will come across during the campaign. It's his magic wand.

It's the tool that provides the most juice. Players may have kitted out Aiden with enough firearms to floor the Territorial Army by the time the credits roll in Watch Dogs, but the first and most useful weapon in their armoury is his phone. It's their skeleton key to the city. Their “one-size-fits-all” problem solver.

It's a good thing that this trinket is as plugged into the narrative as it is into the gameplay; given the amount of use the player gets out of it, it runs the risk of turning into a gimmick. But then, the world of Watch Dogs is hooked into the electrode and the switch. The beauty of the baude.

Here is a universe in which the player is offered unparalleled power, but they're made aware from the start there's a cost.

When the player meets Aiden, they're made aware that his nefarious activities have led to the death of his niece. A hacker by trade, Pearce was engaged in a job that went bad, and when the targets of his activities tried to take him out, his niece got caught in the crossfire.

Pearce has been unable to let go of this – despite the urging of his sister – and proceeds on a hunt to find those responsible for his niece's death.

The story is one of the best aspects of Watch Dogs. It isn't particularly ground breaking in the beats it hits, nor is it much of a departure from the usual tale of a tortured soul that stands at the centre of an open world game (see also: Prototype, InFamous, Assassin's Creed 2 and a whole host of others).

But the narrative here is a little more adult than most. As Watch Dogs's unfolds, Pearce is revealed to be little more than a sociopath. The methods he uses are irresponsible and reckless and his determination is so single-minded it shuts out any other human concerns. After a while, it's hard not to see Pearce ultimately as the one most responsible for visiting misery on both himself and his loved ones.

Without going into too much detail, Pearce's quest costs him a lot. By the time the credits roll one would be hard pressed to argue that any of what he did was worth it – if anything he accomplished makes any difference at all – beyond, obviously, driving the action in a rather entertaining game.

And Watch Dogs has content to burn. By hacking into central computers and radar towers of ctOS – the shadowy operating system that runs the electronic infrastructure of Chicago – players can open up the ability to hack devices in Pearce's vicinity.

They can unlock side-quests ranging from vigilante crime stops, to races, to VR games to missions that tie back into the main narrative – one involving busting up a human trafficking ring is particularly satisfying.

The multiplayer also compliments the action wonderfully. Instead of a series of maps, matches and mini-games, players are able to invade one another's single campaigns.

As they barrel through the city streets, they'll be given opportunities to hack other players phones, or they'll find themselves being hacked. In this instance, Watch Dogs becomes a brief game of cat and mouse as the victim of the hack attempts to identify their invader and then hunt them down.

The game's second biggest trump card is the open-ended way in which players are allowed to approach most missions. While there will be instances in which the direct approach is dictated by the level design, many of the missions in Watch Dogs contain multiple solutions.

It's certainly possible, for example, to storm into a ctOS outpost and blast everyone to kingdom come. But if you manage to work out the angles on each of the CCTV cameras, it's possible to hack the central node without wasting a bullet.

That having been said, Watch Dogs' structure is very similar to a couple of recent Ubisoft flagship titles. The ctOS node hacks instantly recall the Eagle Points from the Assassin's Creed series and the radar towers in Far Cry 3.

Also, while Pearce doesn't leap from building to building – which is fair, since Chicago is a cathedral of skyscrapers – the flowing, free-running aspect to his movements instantly recall the cowled protagonists from Assassin's Creed. Watch Dogs has its own rhythm, certainly, but players will note there are some overly familiar beats in this mix.

So Watch Dogs doesn't exactly reinvent the wheel for the sand-box genre, but that doesn't mean it's not worth investing in. It's an engrossing and compelling power trip underpinned by a layered narrative that boasts some rather decent writing.

For a game that bestows the power to hack the planet on players, Watch Dogs at least makes a worthwhile effort to check the player's moral compass. It never forces them into doing anything they don't want – nor does it close off the opportunity to wreak mayhem.

But in the end, it serves up a reminder that every action has a consequence and that revenge, while providing short-lived satisfaction, is ultimately a rather empty-handed exercise.