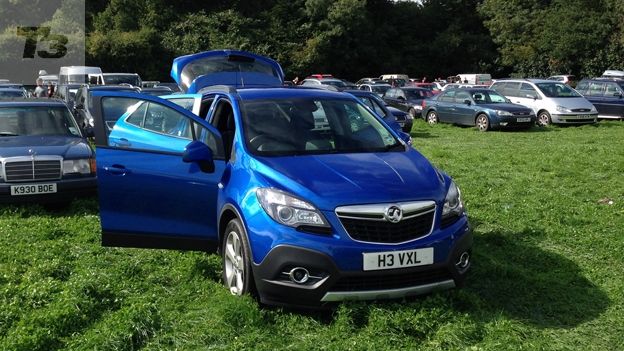 The Vauxhall Mokka is part of Vauxhall and Opel's new strategy to expand their line-up considerably, with the Vauxhall Adam taking on the Peugeot 306 and the Cascada looking to be a premium droptop it was only a matter of time before the company went full SUV.

Of course the Mokka isn't a full SUV though, it's smaller, instead opting to position itself alongside the Nissan Qasqui and the Fiat 500L by looking like a small car that's been given a serious course at the gym.

The results are certainly striking, the Mokka is actually the better looking out of the competition taking on Vauxhalls striking new design language with grills and LED lights taking prominence. Ok so it looks slightly forced next to the Cascada but as a first effort the Mokka looks aggressive and will certainly stand out in the crowd.

Primarily designed for the family run and long drives the Mokka comes with plenty of features to make sure any commute or long journey is as bearable as possible.

The seats are comfy while the interior looks like it could handle any number of small kids on the way back from football practise.

We actually drove the car to Wales for the weekend to take part in the Tough Mudder race and found that despite being assaulted by three very tired, very muddy journalists the car was easy to clean and had more than enough boot space.

Vauxhall is really pushing the Mokka as a premium compact SUV, as such you get a lot of interior features as standard, on the Tech Line model in particular you'll essentially find yourself facing a very similar instrument panel to the Insignia. This is not a bad thing.

That means you get Vauxhall's rock solid Navi 600 system which gives you an integrated Sat Nav, 7-inch colour monitor, 6 speaker system with 20watts per channel output and DAB Radio, all as standard.

When you consider that many of these features come as premium extras on most cars, finding it as standard is a welcome relief.

One of the aspects we've generally liked about Vauxhall's implementation of technology is that it has never tried to overcomplicate things, the Navi range feels nothing short of rock solid. Simple menus and a foolproof mapping system means you won't get bogged down in a pretty but overcomplicated touchscreen menu.

With the Vauxhall Adam moving over to the new touchscreen IntelliLink system it'll be interesting to see if the company has managed to maintain that level of rugged reliability whilst still keeping with the times. For the moment however Navi feels right at home in the Mokka.

Ok so it's not that fast, but in truth the Mokka was never built for speed, it's high-driving position and taller body mean it just isn't going to respond in the corners in the way you'd expect from a hot hatch or a larger heavier vehicle.

Instead you get something inbetween, a car that feels incredibly agile at low speeds but can then begin to struggle if you try and belt it around the mountains of Wales.

In truth if you're after equal levels of grunt and practicality we'd recommend trying the 1.7CDTi before anything else.

The Mokka does a lot of things right – it's better looking than the competition by far and comes with a very impressive amount of standard equipment.

It blends the high-driving position of a Full-SUV whilst still keeping the size down so it'll tackle the English winters both in the country and in a crowded city.

If there was anything we had a problem with it'd be the engine, the 1.6l just didn't feel anywhere near powerful enough for a car that is supposed to be as happy on the road as it is in a field. Also at a little over £17k this is by no means a cheap car.