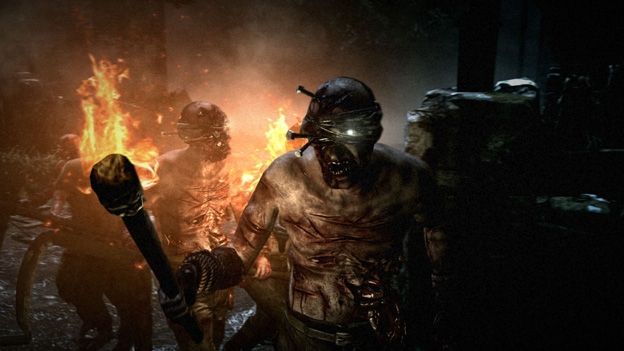 For The Evil Within, the creator of Resident Evil returns to his survival horror roots for the next generation. T3 took a closer look at E3...

With a whole lot of access to Xbox One and PS4 under our belts, we've seen a lot of games at E3 trying their darndest to look great to usher in a new generation, but not so many focusing on them sounding great. Resident Evil creator Shinji Mikami is looking to challenge that with The Evil WIthin, published by Elder Scrolls and Fallout 3 publisher Bethesda.

Sure, at its most basic, The Evil Within is an obvious and long-awaited return to the survival horror genre that Mikami made his name.

The demo we saw, helmed by the man himself, stole visual set-pieces rather liberally from many well-worn horror sources such as Texas Chainsaw Massacre, F.E.A.R, Hostel, Ring, Eternal Darkness, The Shining, Night of The Living Dead, Silent Hill and, unsurprisingly, the Resident Evil series itself.

The Evil Within: Sound

Yet what piqued our interest was the use of audio. The sound of chainsaws buzzing out of view, the whimpering of your panicked character (even if his face, at present, looks a little too unbothered by his torment for our liking), the crash of unseen terrors behind the screen's viewing area.

It knows what you don't see is more unsettling than a gallon-load of gore (though it has that too) and demands to be played with headphones on.

The Evil Within: Plot

The Evil Within starts off innocuous enough as a detective investigating a disturbance at a mental institution - it's called 'Psychobreak' in Japan - and as you enter its suspiciously Resi-like brown wooden door, you wonder whether you're in for something of a retread.

But some spooky security camera footage later and you find yourself hanging upside from your feet surrounded by corpses, desperately flicking the analogue stick to swing yourself down.

If you want to spoil the rest of what happens, watch the trailer [http://theevilwithin.com/], though we'd suggest a game based around unknown fears will be best enjoyed knowing as little as possible, so we won't describe it here. Indeed, we've been avoiding explaining details of the demo to other journalists in conversation while at E3 so as not to spoil its impact.

Less specifically, combat appears far more contextual, the settings of the action changing drastically and your responses having to do so in turn. Your character will get injured and you will have to deal with the consequences.

It is very much a survival horror in that you must use what you can find, and weapons are scant, though guns do feature, while discarded medical syringes are used to stock up health.

What's really startling is the pace, or lack of it, a sinister slow-burn even for Mikami's standards that lets the soundtrack build the tension before the inevitable set-pieces that escalate dramatically. Stealth is key, too, and this married with the game's constant decision to turn away from the visual horrors in preference for desperate survival makes it all the more realistic.

Let's be honest, if you were faced with some terrifying unknown evil, would you stand and trade blows with the thing or leg it?

The Evil Within: Verdict

While it isn't as weird as some would have you believe and is almost purposefully derivative in places, we hope this is part of a grander, meta statement that Mikami wants to make over the full duration. Surely no one can wilfully replicate so many iconic images from horror's history and not have something to say with them?

Until the time comes, we're waiting patiently to find out - with the light on, obviously.

The Evil Within release date: 2014

The Evil Within price: TBC

More about The Evil Within