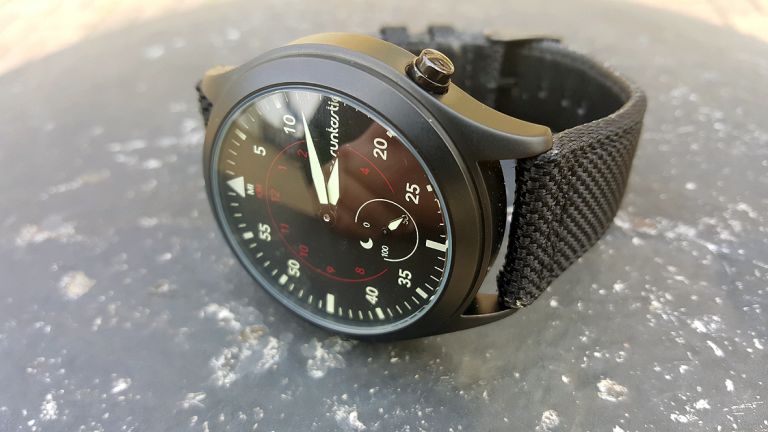 Runtastic is a brand more popular in Europe than the UK, and is noted more for its apps than its hardware. However, it's got a variety of fitness-tech products on the market, all designed to partner with the apps, one being a fairly standard fitness tracker - theRuntastic Orbitband. The Moment is a sexier proposition, being essentially an analogue watch with an Orbit stashed in it, very much à la Withings' Activité.

• Our favourite running watches are here.

• Our favourite fitness trackers are here.

• …And our favourite watches are here!

The Runtastic Moment comes in four versions, the Elite, Classic, Basic and Fun, three of which are pictured here - the 'Fun' appears to be the "Basic' in gaudier colours. We've gone straight in at the high-end, the Elite, and you should too. Although the black coated stainless steel case isn't shy or retiring at 46mm across it's not overwhelming, and the NATO-style woven strap complements it nicely.

There's a single button low on the right side, and the face is a pilot-style affair, which only on very close inspection reveals one of this watch's secrets - the internal scale is in KM due to it's ability to track your running prowess. The glass is proper mineral glass, so no easily-scratched plastic to be seen, and the weight is 242g, just enough for a decent heft without being too cumbersome - it's also waterproof to 100m, so you can swim in it.

The battery is a standard CR2430, and will last for 6 months according to Runtastic, though there's an ominous watchmaker's screwdriver in the packaging, hinting that battery replacement might be a regular undertaking. Generally, it's an initially positive experience.

The Moment Elite's claim to health gold is the embedded step counter, which is where the fun really starts. Once you've paired the Moment with the Runtastic Me app (which houses all your general activity info) on your phone via Bluetooth Smart, there's a small 'complication' face at the bottom of the main dial, which indicates how your activity performance that day is stacking up.

The step tracking is reasonably accurate, though maybe a little on the generous side at times. The Runtastic app can use your phone's step data as well, so activity done while you're not wearing your watch for can be tracked too.You can set goals, but only if you've sprung for a premium app upgrade.

A firmware update will allow you to use full Runtastic running app, with the watch auto-syncing with your phone when you boot it up. Then, when you start a running session, the hands become your distance marker, with the big hand tracking your progress towards one unit (km or miles depending on your app settings), and the small hand each complete unit. Hitting the button will resync the hands.

As an extra bit of functionality for a lunchtime run at work, or similar casual workout, this might prove to be good fun, but obviously this isn't going to bother Garmin or Polar in the serious running market. It's just a very basic second screen for the Runtastic mobile app.

Sleep tracking is triggered by holding down the only button, which makes the little fitness tracker hand to sweep round to point to the moon icon. The actual sleep tracking stats are solid enough, including duration, and both light and deep sleep phases, although the usual caveats about usefulness apply.

The other add-on that Runtastic has shoe-horned into this unit is a basic set of alerts. These can be configured via the app, but essentially consist of phone based alerts piped across for missed calls, emails, FB notifications, etc, and alerts that you've been stationary too long. The vibrate alert is great, but there's also a small red led mounted behind the face, which unfortunately isn't masked and bleeds light in a slightly budget manner.

There are actually two apps to play with here, the basic Runtastic Me app, and then the Runtastic running app.

Runtastic Me is indeed pretty basic, and manages syncing of the watch with the app, thus hoovering up and displaying a week's worth of your daily stats such as steps, active minutes, calories burned, distance travelled and sleep logged. Each of these can then be drilled down into further to display a progress graph against previous days and your overall goal.

The free version stops about here, but the £42.99 per year, premium version adds longer data retention periods, and more configurable goal setting abilities. Yes, you read that correctly: you have to pay to change your step goal and see your full usagehistory.

The reason for this seemingly crazy state of affairs is that the premium payment also covers an upgrade to the full Runtastic running app. This is excellent, and very much a rival to Endomondo, Runkeeper and Strava in terms of tracking data, setting goals and participating in a community by accepting and issuing challenges, sharing PBs and goals, etc.

However, while £42.99 per year perhaps isn't a terrible deal to get additional training plans, story runs and lose the ads on Runtastic, it is a terrible deal to get daily tips (as you can see from the one above, the profundity level is not super-high), unlimited history, longer-term data overviews and set goals on the bog standard Runtastic Me app.

This wouldn't matter if the running functionality was fuller and better on the Moment Elite, but as it really is just a glorified step counter, it really doesn't feel worth the subscription outlay. Runtastic needs to rethink this, really.

The Moment Elite is a nice-ish watch that wants to pull off the same track as Withings' Activité. Namely, putting a fitness tracker on your wrist that you want to wear because it's just a pleasing-looking watch, with the step counting and run tracking as an added bonus.

The alerts are also a fairly handy addition, and the long battery life is another winner.

Well, it's just not that nice a watch, is it? For £150, you can get more pleasing looking pieces, and both the Withings Activité and cheaper Activité Pop blow it away for style and comfort.

Also, although I am okay with paying more to get extra functionality and no ads on the Runtastic app, there's no way I'd pay the same just to add functions that are perfectly normal on most free step-counting apps.

That there's no date on the watch face is another minor niggle.

…That said, I'm actually a little surprised by how much I've enjoyed the Runtastic Moment Elite. Removing the faffery of wearing an additional band or having to charge a separate device does make this otherwise basic fitness tracker into something reasonably appealing, though the running tracking element, once added, will obviously require you to carry your phone on runs, while the analogue screen won't give anything like the at-a-glance data you get from a proper running watch.

If you can live with the mediocre looks, this isn't a bad choice for under £150, but it's hard not to think of it as a chunkier, not-as-good Withings Activité.