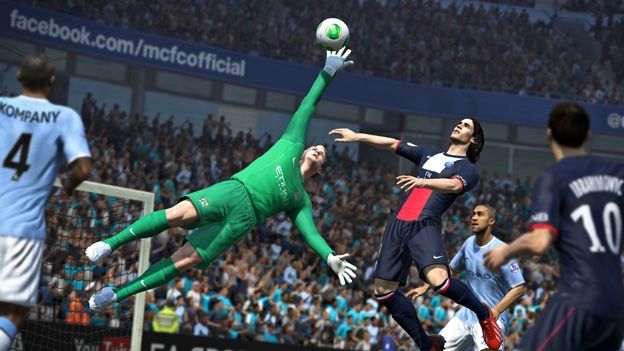 The wait is over - our FIFA 14 review is finally here, but has it hit the target, or turned a bit Torres?

The release of a new FIFA is a highlight in the diary of gamers up and down the land, and for the last few years, EA's franchise has dominated. The Old Firm Derby of gaming – FIFA's battle with PES – has waned thanks to the former's realism, detail and gameplay.

This year PES 2014 is back with a bang, and the renewed rivalry means that eyes have been on EA to see how FIFA 14 will evolve, and there's plenty of changes to talk about.

In terms of features FIFA 14 sees a maturation of the same line-up as FIFA 13. There hasn't been an influx of new game modes, so all the old guard are here: Ultimate Team is back, as is Career mode, multiplayer and the standard quick play.

Love it or hate it, Ultimate Team is more or less the same. EA says the mode has been a hit, but we found it hard to connect emotionally with your randomly assembled team. For the uninitiated, the aim of Ultimate Team is to pick your team based on chemistry, creating a playing unit based on more than raw ability and stats.

However, the process of creating chemistry is more about matching nationalities with the adjacent players within your line-up, rather than in-depth abilities or skills. It feels a little empty, and we much preferred the Career Mode, which benefits from several improvements that makes management easy.

Previous versions of FIFA has made scouting for players a chore, but the updated interface makes sending out your scouts much easier, with more time for playing and less tweaking impenetrable menus.

You can now play co-op seasons with other pairs over multiplayer now, but most of the changes are in the gameplay themselves. Realism is the name of the game, and added physics and AI in nearly every department, from passing, player movement and the movement of computer controlled players has been given a boost. But more on that later.

The line-up of teams in FIFA 14 is as exhaustive as ever, and the level of detail even down to the lowest divisions remains the game's greatest strengths.

EA is also putting more emphasis on classic teams with its Legends feature. However, this is on hold until the next-gen Xbox One and Sony PS4 launch in November, so until then its the standard line-up for players.

Player likenesses are still somewhat of a mixed bag. Chelsea's Oscar looks scarily realistic, while some other top team's players looked less on the money. Hopefully, these dubious doppelgängers will be updated after the game's official release.

The menu system has changed dramatically, with mixed success. It resembles the Xbox home screen, with groups of large panels that you can easily hop between. It's a little overwhelming at first but actually makes navigating menus quick and easy.

The best implementation of the new menus can be found in Career Mode, where it's easy to access the host of options, from transfers to tactics, and is instrumental in the hugely welcome improvements in this fantastic game mode.

It works less well in two player games, where the half-time summary screen is dominated by the formation of your teams. The player whose team is displayed can make quick tweaks, but you'll have to select that panel to access the traditional team management screen, which by the way is thankfully unchanged. It's confusing at first, and we tended to revert to the comforting familiarity of the team management window.

The only real criticism of the new menu system is that sometimes it's unclear which of the giant panels you're in control, which can be disorientating.

Any FIFA player will know that slight changes have huge effects and any fan will eye tweaks to the game with equal excitement and suspicion. One wrong move can make the year a dud.

Regular players will also know that the immediate knee-jerk reaction to a change in gameplay is normally to exclaim that the game feels worse. This year's FIFA is no different.

EA has injected more than a small dose of realism into FIFA 14, and it's all about physics. Your players movement and balance is much more sensitive and it has dramatic effects on their ability on the ball. You can see players adjusting their step – the feature dubbed Precision Movement in action – and looks great as strikers line up their shots, or midfielders skip into the box.

Weight is crucial also; smaller players can no longer have similar physical mass as the giants of the game, and you can shield the ball so players can't simply grab possession by magically morphing through your player's bodies.

The ball physics have also changed. Shooting is highly dependant on your position and balance – which can be lead to top corner screamers and limp pea-rolling shots in equal measure.

These changes have been widely publicised, and you'll probably have heard whisperings from your FIFA-loving friends. But what's the result?

Firstly, the game's pace has plummeted and your more players are far more prone to poor touches at crucial moments, which is a common annoyance. Plain and simple, FIFA 14 is harder to play.

The action is far less frenetic, and it's important to find a balance as you go forward. You can't tear up and down the pitch, end-to-end, but slowing the play down and retaining possession will put you up against an impenetrable wall of opposition defenders. You need to find a rhythm, and attack quickly yet decisively.

The rhythm of games is a highly enjoyable product of the new features, and makes for some much more tense encounters. The new authentic crowd songs create spine-tingling atmosphere, which was particularly evident when we went 1-0 up with Liverpool. With wind in the player's sails and You'll Never Walk Alone reverberating in the stadium they surged forward against wilting opposition. However, with the crowd on your back you receive the same treatment. It makes for absorbing action, with an added dimension to the previous outing.

FIFA 14 is the iPhone 5s of the EA franchise – an evolutionary update which aims to improve within the existing structure of FIFA 13. It's been given a dose of realism, but it's a move that doesn't actually make the game more fun to play.

Like every year the gameplay changes make for challenges to overcome, and returning to FIFA 13 suddenly feels dated and arcade-like. With FIFA 14, everyone's favourite football franchise is still top of the league, for now.