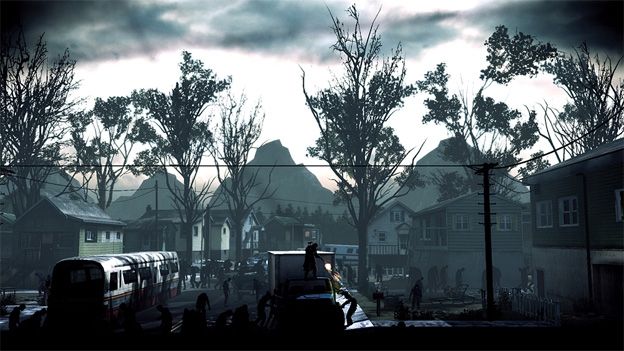 Deadlight is a Zombie survival platformer for Xbox 360 that serves up plenty of action involving the living dead, but is it worth your precious MS points?

Xbox Live Arcade has served up some stone-cold classics in its time, from Braid to Fez, Shadow to Complex to Limbo, and Deadlight is another such small-scale, low-cost downloadable curio hoping to deliver big.

As part of Microsoft's Summer of Arcade, it's also in prime position to get the full glare of the Xbox Metro's promotional spotlight. But can first-time developer Tequila Works deliver a compelling enough experience for you to part with your virtual – yet still very real – pennies?

Set in a wonderfully evocative recreation of an alternative 1986 – one where the unsavoury zombie shenanigans of 1985's Day Of The Dead seem to have actually happened – you're thrust into the not-always-steady hands of Canadian park ranger Randall Wayne on his journey to Seattle to find his wife and child.

He's a troubled soul – aren't they all? – and the land is awash with the undead, which quite honestly isn't a great mix for anyone's faculties.

As you journey through suburbs, sewers, office blocks and abandon motorways, you have to help the odd fellow survivor, pull off the odd fetch quest, outrun the occasional helicopter, collect pages torn from your diary – which you inexplicably seem to have left all over the city – fend off zombies and, well, not that much actually.

Tequila Works has been very forthright in dispelling any kind 'save the world' scenario, and it wasn't lying. This is one man's story and, rather realistically if not particularly typical for a game, what happens is very understated.

Luckily, the world is so fantastically created, the most fully realised zombie apocalypse we've ever played, with more in common with the film of Cormac McCarthy's The Road and former Xbox Live Arcade title I Am Alive than the supernatural-tinged likes of Resident Evil.

Riffing off the plots of 28 Days Later and The Walking Dead fairly heavily, too, with an excellent 80s ambience, from the Rambo-esque outfit down to the pulsating, John Carpenter-esque synth score, it has atmosphere to burn. Don't rush this one, soak it in, as it doesn't hang around for long.

Using Epic's Unreal Engine, Deadlight feels like the Gears of War developer's Xbox Live Arcade hit Shadow Complex at times, all hiding behind crates and pulling yourself up on to ledges. Actually, in its final, more action-packed act, it almost apes it.

However, while Epic's was a sci-fi-tinged blaster full of chrome and kinetics, Tequila Works' brooding drama is in the main more slow paced and contemplative. It's perched somewhere between the fiendishly dreamlike Limbo and the otherworldly loneliness of Amiga shooter Flashback, but with a loner attitude all of its own.

There are several variations on this general action platformer theme that play out across Deadlight's 'two dimensional plane on a 3D background' terrain. Occasionally you will need to use the scenery or coerce zombies to do things with the wonder of whistling or chucking stuff.

There are Rick Dangerous-style 'run really fast and predict the upcoming terrain' reaction-based parts which feel good when you pull them off first time, but mostly they'll need at least a second go, unless you're clairvoyant. There Will Be Restarts.

There are also occasional fetch quests where you can't leave set areas until you've found something, but that's rarely a problem. This is no sandbox, but the variations tie in with the story arc to keep you interested enough to want to see more of the world.

Weapons take a while to appear, and when they do – axes, slingshots, pistols and a shotgun – they're limited in their effectiveness, which means avoidance is the name of most of the game.

Unfortunately, Deadlight isn't the tightly woven game Shadow Complex is, so avoiding is often easier said than done. Control ''quirks' such as having to be millimetre-perfect with both ledge jumps and your character's placement when pulling down shelf units to block doors can lead to frustration when you need split-second timing.

In fact, when Deadlight gets hectic it feels like an Amiga or Mega Drive game given a graphical update but with the old controls strangely unrefined.

It's a shame, as the foundation is here for something truly special – we're ashamed to admit we spent a good 20 minutes reading through Randall's diary – but it's slightly hobbled by its old-fashionedness. That said, this plays into its whole 80s aesthetic and would it be silly to suggest that such a whopping great homage of a game had limited controls on purpose?

Perhaps, but the genuinely intriguing storyline, fantastically realised world and excellent use of surprise – the 3D backgrounds allow for some great, unexpected appearances – makes Deadlight a thoroughly enjoyable fright fest despite its rudimentary problems.

Deadlight is by no stretch a big game, and we finished it in a couple of sittings over a weekend without even realising. The progress counter only times actual in-play duration, rather than the many, many times you'll die and restart trying to move things along, but ours stood at two hours and 30 minutes on finishing the story.

Our external timer said we'd taken more than double that in real time, and Deadlight's relative brevity, married with its cracking story, means you won't mind playing it through again.

Which is a good thing, as there are loads of collectables, from plot-sensitive diary pages – a lovely touch, and very intriguingly paced – right through to rather neat, mini Game & Watch-style, playable LCD games to collect. The latter are much harder to find, but all the more rewarding as three Achievements are linked to breaking a high score on each of them.

We've seen some moans that it's too short, but it never felt that way to us – remember the games it looks to reference in its style, such as Another World and Prince of Persia, only had a few hours of actual play time, too, with the duration swelled by the many, many restarts as you fell into yet another pit.

Likewise, Deadlight doesn't outstay it's welcome and wraps up everything it needs to do in its duration. You only get out of a game what you put in, and if you're a time-trial kind of player, and to hell with the collectibles, this probably isn't for you.

This is a game about atmosphere, and the collectibles all add to that. We particularly liked the contextually relevant, 80s soundtrack-themed Achievements, but then we're a bit smirky like that.

Deadlight is a zombie action platformer that will undoubtedly divide players. Is it a great game? Far from it. Is it a great exercise in genre homage, world creation and era celebration? Absolutely.

Drenched in atmosphere but with heavily unrefined game mechanics, your reaction to it will be determined by your past. If you were a child of the 80s, you may appreciate all of the era and genre nods it gives, take nostalgic solace in the 16-bit feel of the mechanics, get lost in its fully realised world of decay and desolation and embrace the gameplay quirks as retro fun.

If you're not, you will no doubt find it unrewarding compared to more polished Xbox Live Arcade hits like Limbo, and its brevity not compensated in the same way as PSN's Journey.

Which is probably how it should be, as Deadlight, much like the 80s zombie films its makers clearly love, is an unreconstructed B-game destined for a cult following, where just a few people like it an awful lot. We're unashamedly more in the latter camp.

Deadlight availability: Out now on Xbox 360