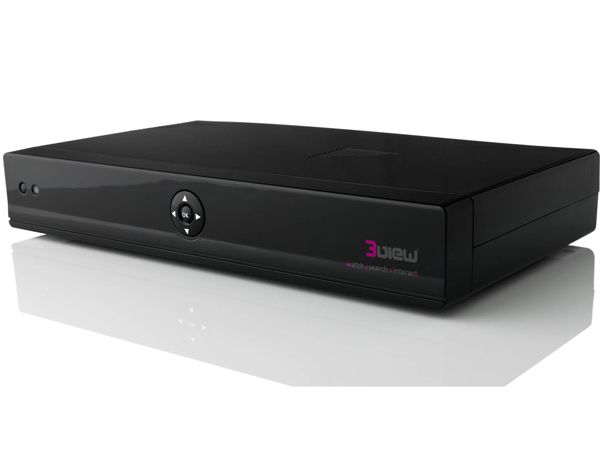 British brand, 3view's debut product is one of the very first Freeview HD PVRs offering subscription free hi-def channels and a 500GB hard drive to record them on. But there's more. With access to BBC iPlayer, YouTube and the new Sky Player, it's pushing the boundaries of the humble PVR category.

The anonymous black box doesn't give much away. There's no display or standby light and hard no on/off switch for an emergency reboot. Power up and the skinny remote control gives you speedy access to the channels and other features via an inviting purple-tinted on-screen interface.

And there are many features. Freeview HD means you get BBC HD, ITV HD and Channel 4 HD on top of the usual standard def channels. The 500GB hard drive provides plenty of room for the two-hour memory buffer, making pausing and rewinding live TV possible. Meanwhile, BBC iPlayer, Sky Player and YouTube offer plenty of online material on demand. And if that wasn't enough, more apps are on the way that will put Twitter and Facebook on your TV screen.

3view: EASE OF USE

From the home page you can jump to the excellent eight-day EPG and watch or record TV – or both thanks to the twin tuner. The clear icons make it easy to find your way around, but there are some useful shortcut buttons on the remote control as well.

Underpowered PVRs are often painfully slow to change channel and scroll through the menu, but this box is relatively speedy.

Recording is a simple case of highlighting the show you want in the guide and choosing either to watch, record, or record whole series. You can fit about 100 hours of high def footage on the hard drive and all your saved shows will appear in the library with still thumbnail pics and labels for each one.

Of the fifty-or-so Freeview channels, it's the three HD stations that really stand out. By broadcasting at 1080i resolution you get a conspicuously sharper, cleaner and more engaging picture than the standard def broadcasts. You can actually set the video output to 1080p. Upscaling all of the channels in this way gives a pretty satisfactory picture across the board.

A handy button labeled 'web' on the remote will take you straight to the online features including BBC iPlayer, which puts the Beeb programs you missed on the screen in excellent quality. Sky Player is a new VoD service that's just launched and wasn't yet active at time of writing, but promises to add all of Sky's best bits into the mix. With the YouTube app, you'll never be stuck for things to watch.

3view have actually gone even further with the online feature set to include social networking apps, Facebook and Twitter. These were still in progress too, but assuming you'll be using your own keyboard, rather than the very basic 3view remote to type on, these could add some compelling functionality.

With DLNA compliance, you can also find digital content that's stored on your PC. Streaming music and photos in this way is fairly reliable, but it's a lot quicker of you simply plug in a flash memory or external hard drive directly into one of the USB ports.

The first wave of Freeview HD PVRs has only just arrived and already 3view, the new kid, is the box to beat. Our early sample is still awaiting the firmware update that'll add the final functions, but even so, it has much more to offer beyond the basic PVR functions.