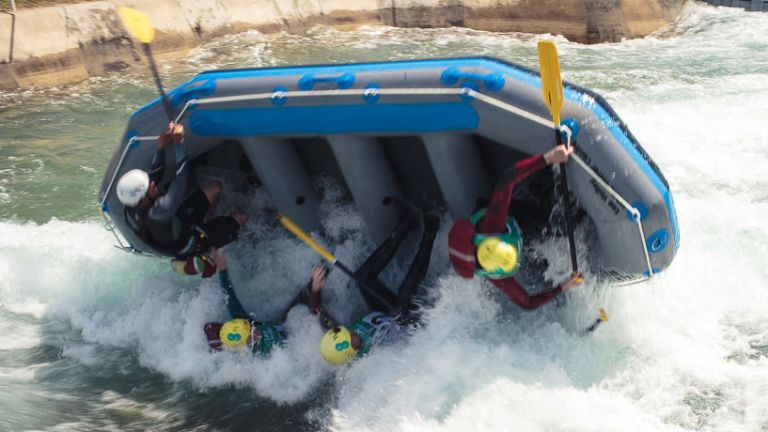 If you're in the market for an action camera that's harder than a diamond statue of Vinnie Jones then look no further than EE's latest offering.

Last week EE surprised us by announcing an action camera in an attempt to take on a market currently owned by the likes of GoPro and TomTom.

The 4GEE Action Camera is the first of its kind to live stream directly from the camera (using the network's 4G service) and I was one of the first to get hands-on with it.

To take it for a proper spin we went white water rafting at the Lee Valley White Water Centre, built for the 2012 London Olympics and now open to the public. Rapid waves, spinning around and huge amounts of noise - it's fair to say it got a good workout, as did I.

I was hooked up with the new 4GEE Action Camera on my helmet ready to record the next embarrassing three hours. It's fair to say the camera itself isn't exactly a looker, with its bulky plastic housing painted in a bland grey leaving a lot to be desired.

It felt heavy, but the secure connection meant it wasn't going anywhere. It made my helmet swing around a little at first but a quick tighten of the straps and it was fine.

I went round the course five times and it survived knock after knock, even after accidently smacking myself in the face (and the camera) with my paddle it didn't break off.

On one occasion our boat capsized and as I surfaced I was greeted by the overturned wreckage coming right at my head. Instinctively I threw the top of my helmeted head toward the boat – and therefore the camera – and it survived.

It's unlikely then that you'll see the Action Camera tumble down the mountain you're skiing on, or float off down the rapids you're battling against, but you may find some inconsistency in your footage.

On a few occasions I'd put my hand up to check it was still pointing in the right direction to find it had turned left or right. Some activities you'll be using this for won't matter, but when you're being knocked around by wave after wave it's going to ruin a few of your shots.

The main take away here is just how durable the camera really is. I tumbled into the water four times throughout the day and it was still happily streaming as well as recording to the internal memory.

If you're looking for a sturdy alternative to GoPro and would make use of live streaming your adventures the 4GEE Action Camera is the only suitable option.

We haven't been able to fully test it yet, we need to have a proper look at connectivity and battery especially, but you can expect our full review in the coming weeks.

Check out the footage captured from one of the runs below, but please bear in mind this was streamed at 480p so the quality isn't as good as the 720p resolution which is also available on the camera.