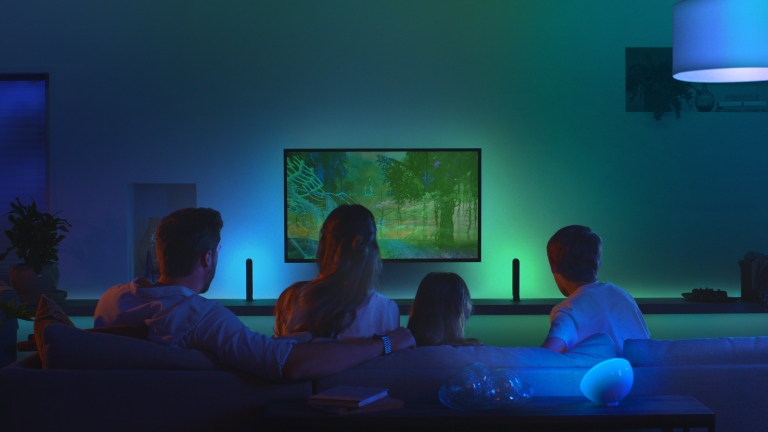 Philips Hue has the best smart bulbs business on lock right now, with an unparalleled portfolio of smart lights allowing people to intelligently light their home in whatever way they wish. There's a reason why we gave the lighting platform a maximum 5-star score in our Philips Hue review.

And, with the new Philips Hue HDMI Sync Box, the lighting master has now added the ability to have its smart lighting products sync to content playing on TV. The Sync Box sits between any TV box, games console, DVD/Blu-ray player, or entertainment system and a television and allows a user to sync their lights to their home theatre experience.

The Sync Box itself (seen above) has four HDMI inputs, too, meaning that up to four devices can be connected at any one time, and as the box itself connects to the TV via HDMI, the result is a rapid and seamless display of coloured smart lighting that responds and reflects the content viewed. In addition, the Sync Box can work with just audio streams, too.

Recently, at IFA 2019, T3 got to witness just how the system worked. The demonstration took place in a living room environment where multiple Philips Hue light strips and towers were placed around the room, much like surround sound audio systems are arranged. Some of the lights stood on their own, while others were wall mounted. Numerous light strips were also placed behind the TV, so that coloured light emanated from around it, too.

A selection of movie trailers were then played, including one for Avengers: Endgame. A good example of how the Sync Box system reacted was that when Iron Man fired his red hand cannons, the lighting in the room not only turned red, but moved around the room to follow the direction in which he was firing them, growing in intensity as his beams did. Equally, when fighting was taken place on-screen flashes and explosions were mirrored in colour and intensity in the surrounding Philips Hue lights.

The experience was intense. It definitely added to the immersion of the action.

That intensity can be modified via the Sync Box app, with a "subtle mode" for example cracking down the intensity and speed of the lighting transitions and flashes. This seemed the best mode for slower, less action-stuffed films and TV.

In terms of technical specifications, the Philips Hue HDMI Sync Box supports 4K, 60Hz connections. It is important to note that it doesn't support HDR10+ or Dolby Vision, though. HDR10+ and Dolby Vision will still pass through the Sync Box, but it won't be able to analyse the images to determine how to activate the room's smart lighting. This is not ideal, but it does mean that you won't be unplugging and re-plugging the box every time a piece of content that it doesn't support needs watching.

Another important thing to note is that the Sync Box necessitates a Philips Hue Bridge, although we're guessing 95 per cent of Hue users already have one installed.

T3 will shortly be producing a full Philips Hue HDMI Sync Box review, so be sure to check back in soon for our official verdict.

The Philips Hue HDMI Sync Box launches on October 16, 2019, and will cost $229.99 €249.95 (UK price TBC). Launch date in the UK is January 2020. More information about the product can be found on Philips Hue's official website. For great prices on Philips Hue smart lighting check out today's best deals below: