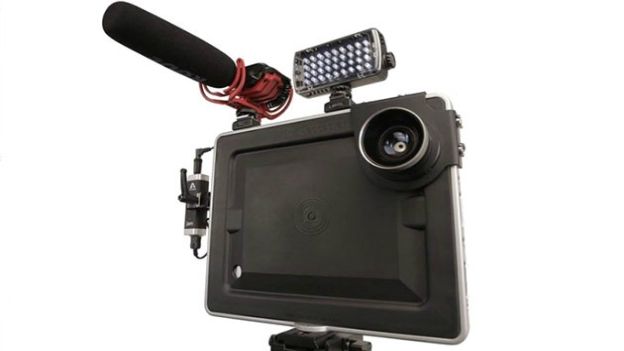 The Padcaster Mini has launched on Kickstarter for iPad Mini users looking for a professional filmmaking rig.

Like the original Padcaster, the Padcaster Mini features an aluminum frame and a flexible insert that cradles the iPad Mini, absorbing vibrations and keeping it firmly in place.

When combined with the included cold shoe adapters, third-party accessories can be mounted such as lights and shotgun mics.

There's also a hole in the bottom so you can mount the Padcaster Mini on a tripod.

A removable lens mount bracket is also included allowing users to position their own wide or telephoto lens over the iPad's existing lens.

Padcaster's inventor, New York-based film-maker Josh Apter, says the Padcaster Mini could also be used for applications such as a mounting frame for a DSLR, a portable lighting bracket, or even a teleprompter.

The Padcaster Mini is currently on Kickstarter where production funds are being raised.

The original Padcaster rig was recently featured in Apple's latest TV advert in which someone is shooting a video of a waterfall with an accessorised iPad Air.

You can check out the “Your Verse” iPad Air advert below.